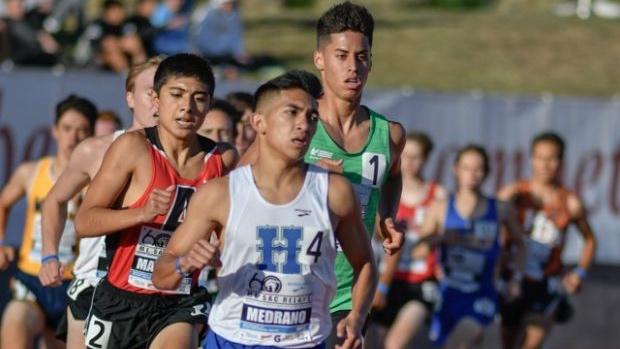 For the first several weeks of the outdoor season, a surprising name occupied the top spot in the national rankings. In the boys mile.

No less confusing was that he was from New Mexico, not traditionally a producer of great distance talent.

This begged the question: Was Jericho Cleveland legit?

That all changed when Cleveland dropped his stunning 4:09.81 on March 24 at the Chandler Rotary Invitational, a time that would stand as the U.S. No. 1 for nearly a month, before the Volcano Vista (NM) senior would better it on April 20 with his 4:07.89 win at Brooks Mt. SAC -- he currently ranks US No. 10.

Jericho Cleveland was a bona fide breakout star, who in the span of a month had lowered his outdoor 1600m PR by nearly 10 seconds. And so his place at the top of the national rankings suddenly looked a lot more legitimate.

But for Cleveland and his dad Shane, who coaches at Volcano Vista (NM) High School, they knew it was long time coming. Injuries limited Cleveland during his junior season before a healthy stretch of training led to his massive breakthrough.

"I was expecting to run fast, but maybe not that fast (at Chandler Rotary)," Jericho said. "I didn't really expect to have a leading time in the US or anything. I just thought I could run a good race there."

Shane was a little more confident than his son.

"I knew it was there," he said. "I think last year we would have seen quite a bit more, but he got a hip injury. [He] wasn't able to do any sort of interval training or hard training five weeks prior to the state meet."

Shane's belief that his son was capable of much more wasn't just wishful thinking; he had been there everyday as Jericho developed from a small freshman distance runner barely capable of breaking a minute in the quarter to a powerful 6-foot-1 senior now running 50 seconds for 400m. The tools were so obviously there, Shane knew, and 100-percent healthy, the high school world would get its first taste of what Jericho was truly capable of.

"I think last year he would've probably been running about what he's running now (without the injury)," Shane said. "Hopefully this year he'll run a little faster." 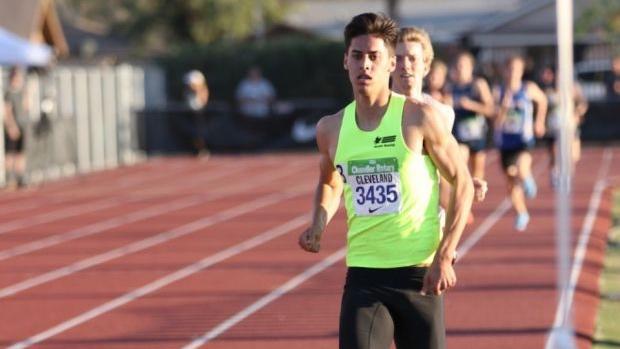 So strong was that father and son belief that they decided to wait until the 2018 outdoor season before making a college decision.

A few Division 1 offers were there even when Jericho wasn't running at his full capabilities, but Shane preached patience and faith while believing that the best would come.

But with just one outdoor season left for Jericho to prove himself to top Division 1 programs, Shane wondered if the waiting was actually going to pay off. A small injury in the winter was another speed-bump, and schools that had shown early interest started to get antsy.

Some even pulled their interest.

"I'm a man of faith myself and I've been praying on this for a long time," Shane said. "I asked God to open doors. Doors would be opened and doors would be closed. And that's exactly what happened. Doors just came open. My faith was tested, because we were getting to the very end."

The US No.1 mile of 4:09 at Chandler Rotary proved to be the answer, including one door the Cleveland's had placed at the top of their list since college running became a lifelong goal: the University of Colorado.

Colorado--with their storied-history of distance running success behind legendary coach Mark Wetmore-- was one of the last teams to call Jericho, but the timing didn't matter.

Father and son had discussed the Buffaloes as their dream school since the recruiting process had started, and their sudden interest meant that the waiting game had been worth it.

Jericho didn't take his official campus visit to Boulder, Colorado, until early May, just a week before his final state track meet. He needed to make his decision and make it fast.

But the high school senior quickly realized upon arrival that he had found his college home. Aside from the impressive facilities and the proven track-record of coach and program, one moment during Jericho's visit really hammered home his patience.

While out on an easy run with the Buffs, Jericho found himself running next to one of the world's best milers.

"Jenny Simpson is one of the assistant coaches" he said. "I was just running and I looked next to me and she was just there running. I was like, 'This is crazy,'" Jericho said.

The star-struck teenager made sure to stop by the university bookstore to grab a piece of Colorado apparel before heading back home, the lone school visit in which Jericho made such a purchase according to his father.

That tipped Shane off that his son had already made his choice, and when a substantial offer from Colorado came over the phone a few days later, it was finalized.

It all happened so fast. Jericho, an underdog runner from a state without many elite distance runners, who months earlier was not even on the radar of most top programs, was now one of the top recruits heading to one of the top programs in the country.

Shane was out of town for work when his Jericho called him to break the news of his decision. It was a special conversation between a father and son who had wanted so badly to share this moment together.

For Shane, the relief and joy that he felt was emotionally overwhelming.

"It was very emotional. I personally wept for about five minutes after I hung up the phone with him. Because it's been a long haul, long road," he said.

Included in that long road was a frustrating moment from the fall.

Needing a top five finish at NXR Southwest to qualify for his first trip to nationals, Jericho found himself among the leaders in a pack of three that had broken away with a half mile to go. Among those three was eventual NXN champion and Gatorade National Cross Country Runner of the Year Aidan Troutner.

Jericho was battling for the win when disaster struck.

While navigating a hairpin turn with the finish line in sight, his heel was clipped by the third-place runner, sending him to the ground and dashing any chance he had of qualifying to Portland. A disoriented Jericho stood up facing the wrong direction, and was immediately run-into by members of the chase pack.

He eventually got up and ran towards the finish line, but totally spent from the ordeal faded to twelfth. But instead of dwelling too long on his unlucky break, Jericho used it as motivation for his final track season.

"Not being able to make NXN as a senior, which was my last shot, was really disappointing," he said. "I feel like it definitely motivated me to train my butt off in the winter and the spring," he said. 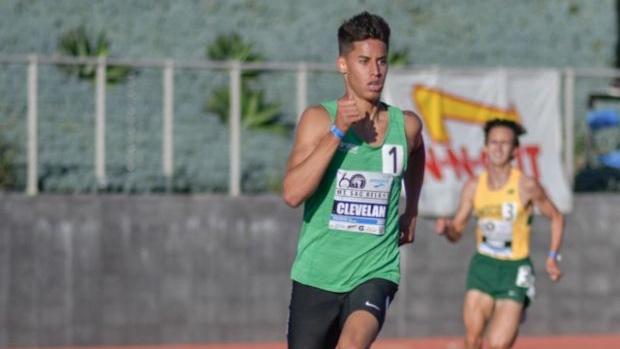 And yet, the biggest factor for Jericho emerging as an elite late-bloomer seems to be his strong relationship with his father.

Jericho idolized his dad while growing up. Shane wasw a triathlete, and his hard work ethic left a lasting impression on him. It's a memory he draws on even today as an accomplished athlete in his own right.

"That's probably mainly where I got my motivation to work so hard from, is from my Dad," Jericho said. "He would just tell me stories of stuff he had done to train for his races, and I would just be amazed. That would give me motivation and get me excited to try to become one of the best athletes I can be."

The Cleveland's are members of the Native American Colville Tribe, and their shared love for the sport is due in part to a strong history of runners in their tribe. Running is a part of the Clevelands' DNA--from Shane down to his three sons, extending well before that with their ancestors--and Jericho's success has become a source of pride in his community.

"I'm proud to be part of the tribe," he added. "It's definitely a factor in my competitive nature. I love being able to represent my bloodline at competitions," said Jericho.

For both Shane and Jericho, running has always been a part of their identity together. It's been a constant source of conversation around the dinner table and a fun way for them to spend time as father and son in pursuit of excellence.

Having his dad serve as coach after his own career in triathlons has allowed Jericho to trust his father's instincts--even when that patience seemed like it wouldn't pay off.

Their bond in running has been strengthened over years of each delivering on promises.

A few days after signing with Colorado, Jericho swept the 800m, 1600m and 3200m titles at New Mexico's state championships. A week later he finished third in the adidas Boost Games Dream Mile in a 4:08.95 PR.

It's been a dizzying few months of recruiting madness, and Jericho Cleveland is finally emerging as the star he had been envisioned to become.

And now that he is achieved the vision he and his father set forth, Jericho is excited to up his game next season in Boulder, where the New Mexico star will have no chance of being overlooked any longer.

That's all good to Jericho.

"There's this saying where you're a small goldfish in a small pond, but if you take that goldfish and you put it in a lake, then it'll grow so much bigger," he said.

"I'm looking forward to the growth and progression that's going to come with going to college and training really hard with those guys there."