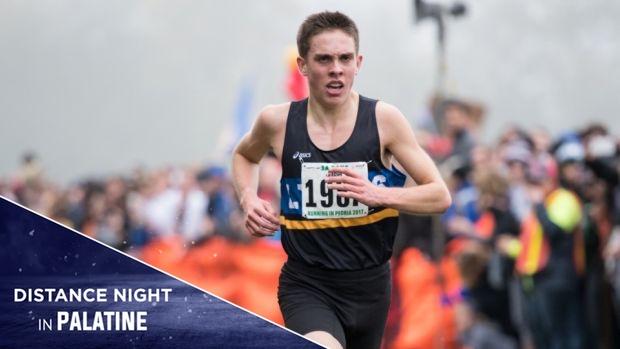 Get ready for a stellar display of distance running on Saturday night in Illinois.

The Distance Night in Palatine, in its third year running, will feature some of the top talent in Illinois and Wisconsin on the track at Palatine High. You can watch it LIVE on MileSplit HERE starting at 8:00 p.m. ET.

In the meantime, we've broken down the elite races and offered our predictions for what no doubt will be some really engaging racing.

Breakdown: This is the big showdown of the night. And while it could be anyone's race to win at the line, the best bet might be a duel between Mendez and Kilrea. Mendez has the fastest PR on record of 4:11.26 and could be a favorite to win the Class 3A race in 2018, though Kilrea has been on a tear throughout his senior season and also owns a time of 4:12.81. Both have national meet experience and have tested themselves in large fields.

Gebhardt, a runner-up in Class 2A in 2017, shouldn't be overlooked, either. He ran 4:14.51 in this race last year to finish fourth -- last year's winner, Jack Aho, crossed the line in 4:12.05. And there's also Bosley, the Wisconsinite who has requisite national experience. He's the wildcard here to win, considering he's never posted an open outdoor 1600m faster than 4:23.60.

Breakdown: While Niziolek is the defending champion in this race, she might not be the favorite. That could be Pena, the senior from Neuqua Valley. Pena did not race the distance in 2017, but she's coming off a PR in the winter at Illinois Top Times, where she finished in 4:59.84. While that puts her as the fifth seed, all four girls ahead of her used times from last year's competition and have yet to go under 5 minutes outdoors in 2018.

Maybe that's just semantics, but Pena has at least a little mental edge in that space. Niziolek likely will trust her ability to throw it down when necessary and enters with the top overall PR of 4:54.85, which she used to win last year. She opened at 1600m last week in 5:12.73. Long is seeded at 4:57, Sippy is at 4:59 and Christiansen, who finished third here last year, comes in with a 4:59.

Breakdown: There are a few Wisconsin runners making the trip to Illinois for this distance-only meet, and Meinke will try to earn winnings honors in the 3200m. He enters as the top seed, having run 9:06.11 at New Balance Nationals Indoor in the 2-mile. That converts to a time of 9:02.94 for 3200m, so you can bet the Neenah (WI) High junior will look to break that barrier in this race. Interestingly enough, Meinke's in-state competition, Bosley, just broke 9 minutes at Arcadia two weeks ago, posting a time of 8:59.04.

Breakdown: York is actually the top returner from last year, having finished second in 1:55.02, but he'll enter as the fourth seed. That's because he'll have Illinois' returning 800m champion in Class 1A, Wells, to potentially chase.

Breakdown:  Kriss has definitely earned her stripes. A year ago, she won this event in Section 2 and now a season later she's moved up to the fast heat and will remain as the favorite, having posted a PR of 2:11.83 indoors at Illinois Top Times in March.

Breakdown: The Huskies are the top seed and enter 25 seconds ahead of the next closest team, so expect a solo effort here. The goal, perhaps, will be for Naperville North to race under its 12:15 seed time, which would rank US No. 20, and potentially under 12 minutes, which could put the team in US No. 10 territory. Naperville's team will consist of Alex Morris (1200), Claire Hill (400), Hannah Ricci (800) and Sarah Schmitt (1600).

Breakdown: This should be fun. Three teams enter with seed times within 10 seconds of each other: Downers Grove North (10:15), York (10:20) and Hinsdale Central (10:25). It will depend on how each team fields their squad, but look out for York, who may anchor with senior Charlie Kern, a recent University of Missouri signee who went 4:11.67 at the Magis Miles in 2017.