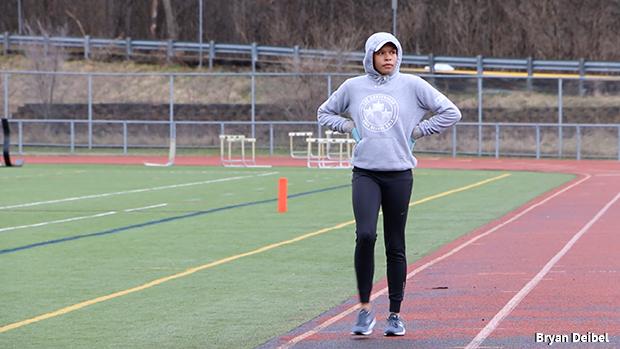 Britten Bowen felt like her state athletic association and her school were holding her back.

So the Ann Arbor Pioneer (MI) High senior, one of the top hurdlers in the state of Michigan -- and potentially in the country -- made a decision that few athletes before her have.

She decided to run unattached to close out her high school career in 2018.

The decision wasn't easy, though. In fact, it was downright tricky. Ann Arbor Pioneer didn't hire Bowen's coach, Candice Davis-Price, to be on staff for the 2018 season, even though she had worked with Brown closely over the past three seasons as a volunteer assistant sprints and hurdles coach.

At the beginning of the 2017-2018 school year, the district chose not to bring Davis-Price back as a coach.

"There was never a doubt in my mind that like, 'Oh, Candice wasn't going to be there'" Bowen said. "I knew that she was going to be able to get me through the situation."

Bowen wouldn't have made the decision to compete unattached without Davis-Price.

Davis-Price had to sort out all the details with Bowen.

"Ann Arbor Pioneer decided that they were going to go in a different direction; that direction was with me not continuing on their coaching staff," Davis-Price said.

"I told Britten, (though) ... that if she decides to continue to run, I would coach her and I supported her 100 percent. I was very honest (and) it would pain me (to not be her coach), but there are bigger things. This is a feather to an eagle."

Bowen was heartbroken at first.

"It's kind of sad to think about it. I can't even run for my school my senior year because of how things happen," she said.

But there's reason to believe Bowen could do some special things in 2018. During the 2017 outdoor season, Davis-Price coached Bowen to her second straight Michigan Lower Peninsula state championship in the 100mH, although on her second attempt she demolished the state record of 13.66, which Davis-Price previously held.

"Proudly passing the torch...who knew 14 years later I would be privileged to witness/coach Britten Bowen to 13.40 slaughtering my state record 13.66 CONGRATS STATE CHAMP," Davis-Price said in a post on Instagram after Bowen broke her record.

But for Davis-Price, coaching Bowen was more than just training -- it was fulfilling a promise.

In 2015, longtime Ann Arbor Pioneer head coach Bryan Westfield lost his battle to cancer at the age of 72. Davis-Price said one of Westfield's last wishes was for one of his former star athletes to continue coaching Bowen.

"On the outside looking in you could say, 'Oh she's selfish or, she chose this, or her coach is a certain type of way,' Davis-Price said. "But even if she went and ran and did everything right, they were (still) going to have an opinion."

"At the end of the day, it's what I need to do what's best for me," Bowen said. "I need to be able to go out and compete with the best of the best in California, in Texas, in Georgia, and Florida. I couldn't go out and get the same competition until states."

This past weekend, Bowen's first competition of the outdoor season came in California at the Long Beach Invitational and at the Bryan Clay Invitational. And the fruits of her labor paid off, as the senior ran 13.95 seconds in the 100mH to win her heat at Long Beach. Oddly enough, Bowen ran on back-to-back days, in two different meets and in two different open collegiate sections.

It was her first outdoor competition since the indoor season, when she was able to compete outside the state at New Balance Nationals Indoor. Michigan's governing body doesn't regulate the MITS Indoor Series, which holds Michigan's unofficial indoor state championship, and Britten was able to compete in six events over the winter, winning a state title in the 200m and finishing ninth in the 200m at NBNI.

By leaving Michigan, she was able to race against the best talent in the nation at NBNI, where she placed sixth in the 60mH. In the long run, both Bowen and Davis-Price feel the move was for the better.

And it's something that will be beneficial when she faces tougher competition in the months and years to come at Ohio State, Davis-Price said.

"Being able to say, 'Hey you know what, I'm in charge of me,'" Davis-Price said. "I'm going to go to a track meet. I'm going to run and take this talent that God's given me and be amazing and not allow you to restrict me ... that's amazing.

"That's bigger than anything they could ever accomplish (or learn) on the track. (She is) becoming empowered individuals."

Update: So far, Bowen has competed in two outdoor competitions at the Beach Invitational at Cerritos College in Norwalk, California. She won her heat in the 100mH running a new season opener best of 13.95. Bowen also ran in the Bryan Clay Invitational in Azusa, California at Azusa Pacific University where she ran in the 100mH 14.16.