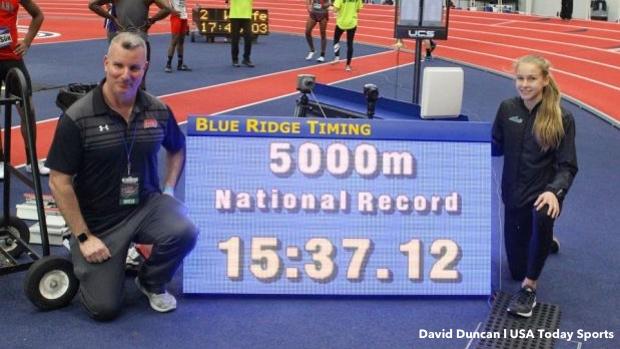 A curious Katelyn Tuohy walked off the indoor track Saturday at Liberty University with a question needing answered.

Just moments after the North Rockland (NY) High sophomore had set a new national record in the 5000 meters at The VA Showcase in 15:37.12 -- barely a month removed from her course record and first-time win at Nike Cross Nationals -- someone had said her race was the fourth fastest in the world at that point.

Tuohy knew her time had been good -- certainly a monumental result considering she surpassed the former national record of 15:55.75 last achieved in 2017 at New Balance Nationals Indoor by Brie Oakley, who graduated from Grandview (CO) High and went on to produce a great freshman debut with the University of California, Berkeley.

But fourth in the world?

"Is that true?" she asked her coach, Brian Diglio.

What do you say in that moment, to a high school sophomore who had surpassed all reasonable expectations over the fall and now, in the first months of the indoor season, was doing it all over again?

Diglio wasn't quite sure if it was true, but he replied with enough certainty that it tempered Tuohy's mind in that moment.

"I said to her, 'That just means no one has run it yet,'" Diglio remembers saying. "'That means nothing.' I said to her, 'Katelyn, I guarantee you nobody who's anybody has run a 5K yet.'"

Perhaps that was slightly a lie. Here were the top three fastest times according to the IAAF: Missouri's Karissa Schweizer, who won the indoor and outdoor 5K at NCAAs the previous year; Ednah Kurgat, the NCAA cross country champion in 2017 for New Mexico; and the Lobos' Weini Kelati, the fastest freshman across NCAA XC championships. They were no slouches.

Tuohy was just hundredths of a second from Kelati's mark.

Still, Diglio thought, you move on.

But it's becoming increasingly more difficult to tame the hype. Tuohy's performance on Saturday registered an IAAF scoring table comparison of 1115 points, which was equivalent to a time of 13:39.93 on the men's side.

And this was Tuohy's first time running a 5K. Heading into Saturday's event, Diglio had just wanted to make sure the sophomore was composed on the track, never looking too far ahead in the 25-lap event. He wanted Tuohy to hold a tempo and stick with it.

"That's one of her strengths," Diglio said, "being able to lock in on a number and kind of just hold on to that pace. She did a phenomenal job."

So Tuohy didn't enter with any goal time in mind. Diglio only surmounted that after her 3000m performance at the Ocean Breeze Freedom Games on January 7, where she ran a U.S. No. 2 all-time effort of 9:05.26 -- about a second off Mary Cain's national record of 9:04.51 -- "gave us a little bit of feedback on what that effort was like."

Tuohy needed to run even splits around 37-38 seconds to eclipse Oakley's mark.

Of course, this was only a tease, too. Tuohy won't run the 5K again this indoor season. She might not run it over the spring season, either.

"Unless something changes, I don't see her running one outdoors, either," Diglio said. "Maybe next year. But I don't like to plan races. I like to think, 'Let's just go organically with how you're feeling and how things are progressing.' When they happen, they happen. I don't want her concentrating on anything too specific, which is why I love her going up in the 5K."

But if there's a figurative checklist on the wall, Tuohy is certainly hitting the marks. Outside of her 3K and 5K, Tuohy ran a NYRR Millrose Games qualifier in 4:43.62, another career best, and likely will try to hit inside the top 10 all-time at the distance on February 3, producing anywhere from the national record of 4:28.25 to the 10th-best time of 4:40.62.

"Her run is the 400m to the 5K," Diglio said. "Maybe she'll be less successful in the shorter stuff, but we haven't shied off of that, either."

What's encouraging is that Touhy, who began encountering fans who wanted her autograph as early as last year, isn't buying into the hype. Diglio says she doesn't play with her phone too much. She doesn't read everything that's written about her. She's just a regular runner with North Rockland High who likes to compete in relays with her teammates.

Sometimes, though, there are things she can't avoid.

"She'll be aware of things," Diglio said. "People will tell her things, but she's not looking things up. That's not who she is. But you can't avoid someone coming up to you."

She has learned her lesson, though.

Immediately following her qualifier for the NYRR Millrose Games 1-mile on January 10, Tuohy met a handful of reporters who were pleading for interviews of the burgeoning distance star.

Politely, she obliged, answering all the questions asked of her. But later, as she went out later for her recovery, Diglio said she tightened up.

So a little over a week later, as a reporter and photographer asked for an interview and picture, Tuohy calmly knew better.

Fourth in the world still needed to do her cool down.