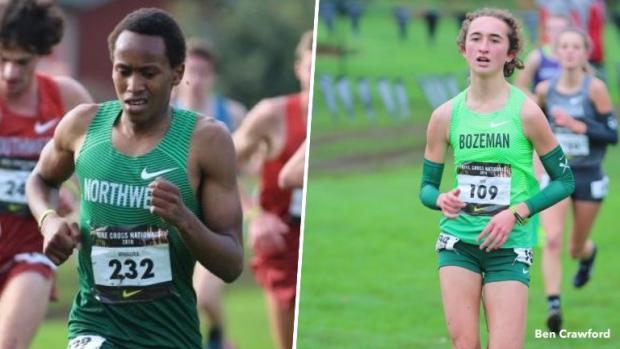 Both could carry that success at a very high level at NXN.

Hamilton's finish began a flurry of pressure for others to secure spots ahead of the fifth-place cut-off.

While the team competition materialized preceding the meet, with Washington state champions Central Valley and Kamiakin earning automatic bids to NXN, the more pressing issue at hand was qualifying as an individual.

And the next three runners all came within three seconds of each other following Hamilton's finish. Bonneville (ID) High's Stetson Moss was third in 15:17.28, Eastlake's Nate Pendleton (WA) was fourth 15:19.13, and Bishop Kelly's (ID) Nicholas Russell was fifth in 15:19.30.

There's still a chance potentially for College Place's Kenneth Rooks, who finished sixth in 15:24.34, to earn a qualifier if in fact Bozeman gets an at-large bid after all the regions take place. With a great resume and a first-place finish at last year's NXN, Bozeman, which finished fourth with 193 points, still has an outside shot of earning a bid to the national meet.

The story, though, was the shocking win of Central Valley (WA), which finished second (86-87) to Lewis and Clark at the Class 4A championship in Washington just a week earlier.

Crater was third, while Bozeman was fourth. Lewis and Clark, meanwhile, was fifth and outside the at-large candidates.

What a race for Camila Noe.

The Bozeman senior, who signed to the University of Portland during the National Letter of Intent (NLI) period, had lost to Mountain View (ID) High's Lexy Halladay in September on the same course.

But it was deceiving in some ways, because Halladay's win that day was only two seconds off of Noe's third-place outing --  Sadie Sargent was second.

Over a month later, following Noe's big win at states over Billing's Tiahna Vladic, the Bozeman senior wasn't playing around.

Super freshman Sydney Thorvaldson of Rawlins (WY), ranked No. 10 in the Flo50, was third overall in 17:36.08, punching her first ticket to NXN, while Mackenzie Marler of Cheyenne East and Aubrey Frentheway of Cheyenne Central were fourth and fifth, respectively -- both runners, by the way, were first and second, respectively, in their Class 4A championship in Wyoming, too.

Bozeman, ranked No. 7 in the Flo50 national rankings, scored 76 points to score a dominating win and automatic qualifier to NXN, where they finished eighth a year ago. Jesuit, ranked No. 9, was second overall with 120 points, while Summit was third and Issaquah was fourth with 146 points.