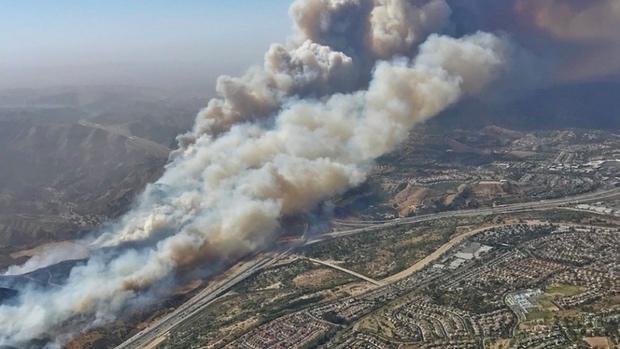 With a quick-moving California wildfire by the name of Canyon Fire 2 racing through Anaheim Hills early this week, outdoor activities at the district's local high schools were cancelled as smoke billowed into the air and feared residents of the nearby community.

The flames were within striking distance of four of the district's schools, including Orange, Canyon, Villa Park, and El Modena, per a report from USA Today High School Sports.

El Modena cross country coach Patrick Imfeld told Milesplit on Friday that the blaze was just a few miles from the school and that a few of his athletes were forced to evacuate from their homes as a precaution. The fire has since burned over 9,000 acres in the Anaheim area and has required the use of over 1,200 firefighters in the region.

"Monday the smoke came in pretty heavy," he said. "So everything got shut down."

El Modena High quickly became an evacuation center, with the Red Cross setting up operations for displaced families. Cross country was cancelled Monday and into Tuesday.

But fortune came El Modena's way on Wednesday as the wind shifted and took the fire in another direction. The blaze is currently in 65 percent containment.

"They got it under control," Imfeld said.

But the repercussions of the fire left some of the team's key training areas burnt and unusable. That included two local parks where the team trained.

"It was pretty scary because it came up so quickly and just moved in and was threatening houses," Imfeld said. "This came up right and really fast into town and that was kind of the situation. We didn't know what would happen."

The Vanguards, however, were back to practice on Wednesday and the evacuated members of the team are back in school. The air qualities are fine, Imfeld said, and only a few athletes with asthma have been limited in practice.

The boys squad, led by Braydon Metoyer, is hoping to qualify for the California Interscholastic League Division 2 cross country championships in late November.

"Team-wise, we're going to try to get to state," Imfeld said.