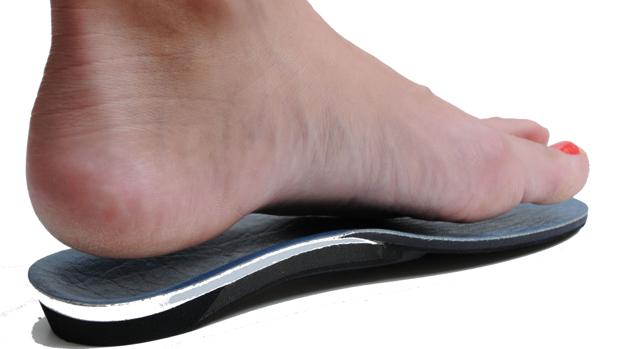 At some point in the career of almost every runner an injury will strike. When that happens, the prudent athlete will swiftly consult a medical professional to assess the injury. Often, the therapist will prescribe a set of orthotics to fix the problem. The usefulness of orthotics when treating running-related injuries, though, is controversial.

Generally, an orthotic is made of a hard substance, often plastic, which sits in the bottom of the shoe to give support to the arch of the foot. The idea behind this has to do with "pronation," which describes the way the arch of the foot collapses as a runner rolls through her stride. If an athlete's arch collapses too much, the result is called "over-pronation." This is thought to force the other muscles of the leg to work extra hard to compensate for the collapse of the foot's arch. An orthotic, therefore, holds up the arch. This, in theory, should cure any injury caused by over-pronation. The problem, though, is often the injury persists even with the use of an orthotic. In this article, we will discuss the reasons orthotics are not always effective as well as possible solutions to that problem

Obviously, the first flaw with an orthotic is that the runner may not need one at all. Pronation is a natural defense mechanism of the body. It softens the blow of each foot-step, protecting the muscles and bones of the leg from the extreme forces experienced while running. If a medical professional prescribes an orthotic as a cure-all, they may not be properly assessing the patient for each risk factor that could have led to injury. Finding a physical therapist who is known to work specifically with runners is the best way to ensure that you are receiving the optimal treatment for your ailment.

Another issue with orthotics is that they may force your foot to act in an unnatural manner. Your foot wants to collapse, so if it is being forced into a position that does not feel natural, that can affect your entire gait. This can lead to different and more serious injuries from the one with which you began.

If you find yourself struggling with a minor injury, it may be worth your time to visit a local running store before heading to a physical therapist. Running shoes today are made with different levels of arch support and getting the proper pair may solve the problem without needing to see a medical professional. Each specialty running store employee will be trained to assess your gait and prescribe the proper pair of shoes. One advantage to getting a good pair of shoes, rather than a custom orthotic, is that shoes are significantly more comfortable than a piece of plastic under your foot (not to mention they are significantly less expensive). If you find a pair of shoes you like, but feel you need just a bit more support, often running stores also sell generic orthotics that function similarly to custom ones, but are a bit less rigid.

If all this fails and you feel a custom orthotic would benefit you, research physical therapists that specialize in running and schedule an appointment with that person to discuss your options. Orthotics certainly help many individuals, but they are not the solution for everyone.