On day 4 of the AAU Junior Olympic Games, 37 champions were crowned. The action also brought some new meet records. You can check out the full list of records here, and read on below to learn more about the biggest highlights from day four of competition in Ypsilanti, Michigan.
FULL RESULTS | SIGN UP TO WATCH LIVE | RACE ARCHIVES

And check out this slow-motion finish:

Tyrese Cooper runs 20.63 to have the fastest time of the 17-18 boys 200m dash at the #AAUJROGames pic.twitter.com/oM6XFwWAED

Tyrese Cooper cruised through the 200m prelims ... and pretty much everyone noticed. But it was the  atmosphere after the race that generated the most buzz. Cooper spent close to 10 minutes signing autographs for fans after his quarterfinal heat before he was taken away.
Tuesday certainly gave new life to the AAU Junior Olympic Games. Cooper's star power is the kind of variable that changes the way fans view meets, and we're luckier for it. Stay tuned for Cooper throughout the week.

Tamari Davis broke the 14-year old girls 200m record -- by our account, it was one of the most impressive AAU records heading into the meet.
But even Davis was surprised by her wind-legal AAU national record. She drew her hands to her face after reading the scoreboard. The crazy part is that it wasn't the first this week. She set a 100m AAU national record on Monday and has more races remaining to perhaps do it again.
Read more in length about Davis' performances here. 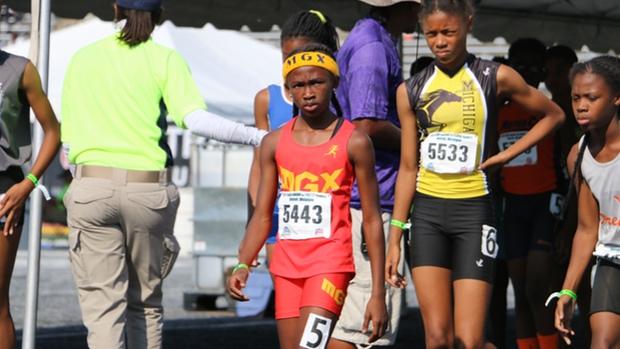 Rising Miami Gardens Xpress Track Club mid-distance star Cha'iel Johnson was one of the more anticipated arrivals at the AAU Junior Olympic Games for many reasons: She's fast, she's young, and she's got spunk!
But she's also the daughter of former NFL wide receiver Chad 'Ocho Cinco' Johnson, who for years has been applauding the merits of his 12-year-old daughter on social media. Tuesday was no different. While Cha'iel's dad watched from afar, she lined up on the track for a chance to qualify for the finals.
But maybe the 12-year-old had too close of a call after registering a time of 59.61 seconds. It finished as the eighth and final qualifying mark for the final on Friday. But she's in, and we'll get to see more of Johnson.
Johnson is also entered in the 800m and 1500m, so she still has a chance to triple at the AAU Junior Olympic Games.

Interview Of The Day: Luke Tewalt

Interview Of The Day: Octavia Gee

Octavia Gee likes touchdowns. In a terrific quote, the 11-year-old shot put champ describes the atmosphere at AAU like a football game.

Photo Of The Day: Ochocinco Sighting!

. @ochocinco with Cha'iel Johnson before she takes the track to run the 12 year-old girls 400m dash! pic.twitter.com/gw9jZZy8vl