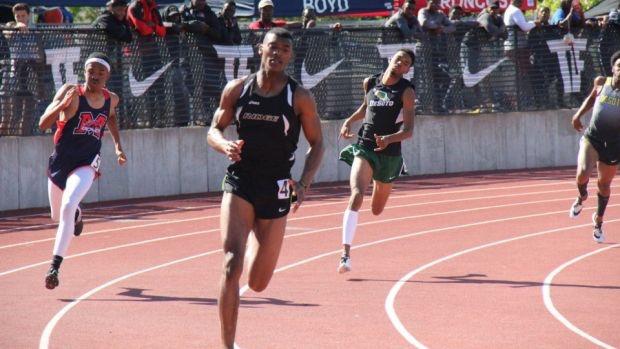 It's been barely a week since Keller Fossil Ridge (Texas) High graduate and Texas Tech University signee Sean Hooper helped Team USA to a World Junior Record in the 4x400 relay at the Pan American Junior Championships in Trujillo, Peru, but he's already preparing for more success. Hooper, a Texas state champion in the 200m and a runner-up in the 400m, returned home to Texas as a gold medalist in both Team USA's victories in the 4x100 and 4x400, running a blistering split in the 4x400 to help pace the squad to a new World Junior Record of 3:00.33. He answered a few questions recently.

Congrats on your World Junior Record in the men's 4x400 at the Pan American Junior Championships in Peru! What has the response been around you since you helped the team break the former record?

Some things I heard were "Good job," "Congrats Sean," "You're greatness in the making," etc. Lol.

Were you surprised that you broke the record?

No, we had high expectations and we exceeded those expectations, but I was thinking in my head during the time if we would. I was happy because we broke it, but I felt like we could have even gone faster!

Could you see it coming during the race? Why? What was the pivotal moment?

Yes, we could see it coming. Because everyone did their part and the goal was to go for the record. I started to open up the lead in the third leg.

What leg did you run?

I ran the third leg in about 44 second mid and my plan was to run a good leg and get a good lead on everyone else.

Do you know everyone else's splits?

Brian Herron was 45-low, Zachary Shinnick was 45-high and Josephus Lyles was 45-mid.

What was the lead-up to the race like? You were basically waiting to perform for much of the championship, watching as most of your Team USA teammates crushed it. What did it feel like watching your teammates succeed, while you, for the most part, waited for the relays?

The conversation going into it was, 'Who's going to win it? Jamaica or America? It felt good, but it helped that I was on the track previously for the 4x100. I felt pretty good about our relay.

Did you watch anything (motivation-wise) beforehand? Did you listen to anything? What got you in the moment?

I didn't listen to any music.

What did you eat for dinner after the 4x400?

We had chicken tenders and fries at the hotel after. The food they had in Peru wasn't the best but it wasn't the worst either, you know?

How did this race, and the experience of Peru, cap off your senior season?

It was a good experience and a very fun trip.

What was your favorite moment of the season and why?

I enjoyed my whole season and it was good overall.

What are your looking forward to when you enroll at Texas Tech in the fall?

What are your goals as a freshman at Texas Tech? Which events will you be running?

I want to be a big impact on the track and the 400 for sure. Other than that, the coaches and I haven't discussed anything else.

Does this experience motivate you, or has it inspired you in any way?

It motivates me, yes, because my next goal is to run the open 400 instead of being on a relay. This has really inspired me to be the best that I can be. You can only run track for so long, so I have to enjoy it while I can.

How long do you think your World Junior Record in the 4x400 will stand?

I don't know really, but hopefully it will never get broken!

If you could race any athlete in the world, who would you run against and why: Michael Johnson, because he's the greatest of all-time and it would be a great race between us.

Best thing about Texas: It's so hot, so when I got to any hot track meet my body is used to it.

What's your favorite hobby outside of running: I used to play football and basketball.

Most memorable thing you saw in Peru when you weren't inside the stadium: Nothing, because we weren't able to leave the hotel due to danger.