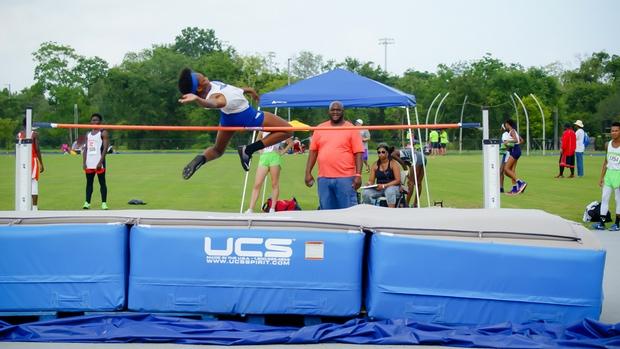 In less than a year, New Orleans Edna Karr (La.) High rising sophomore Alacia Myles, who competes for Sprint Nola Track Club over the summer, has added a foot to her high jump PB.

That's quite an improvement for a first-year jumper.

But what's arguably even more significant is her consistency at high heights.

Myles converted on a 5-10 effort at the Ky Nord Invitational in New Orleans on July 8, which ties for No. 1 in the nation for 15-year-old girls. But more importantly, she's executed on that height on three straight occasions, according to her coach Nile Legania.

Myles is competing at the AAU Club Championships this week at the ESPN Wide World of Sports.

Myles's surge, however, does indicate a big progression. She marked a height of 5-6 in five consecutive outings in her outdoor spring season before scoring a second-place performance at the Louisiana High School Athletic Association Championships at 5-5.75. From May to July, she's added four inches.

Her marks have been surging since January, when she competed for the first time at the LSU High School Indoor Classic and hit 4-10, then later added four inches by February.

Myles finished the outdoor season as the state's No. 6 best jumper, but she tied for the No. 1 mark in July and is currently tied for No. 3 for best freshmen jump nationally. She's No. 10 in the nation overall.