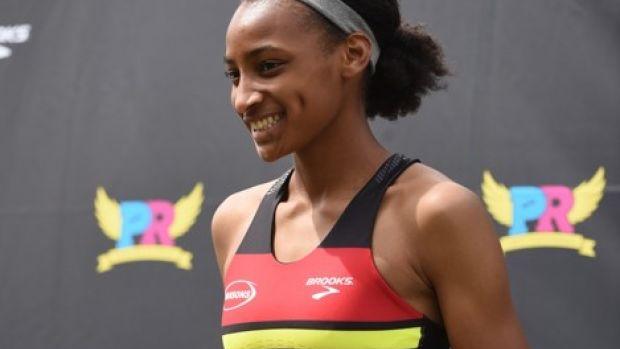 It's tough to argue against the nation's best half-miler, who has a chance to potentially go sub-2:00 if the pace is dictated in the right way. But even if the pace goes out too easy in the first 400m, New York's Sammy Watson still has phenomenal leg turnover, with 24 second 200m and 52 second 400m speed. If anyone is up to the task, it's Virginia's Rachel McArthur, who has 55 second 400m closing speed. If McArthur, or Texas' Julia Heymach or California's Alyssa Brewer, a two-time CIF champion in the 800m, can somehow withstand a tough opening 400m, they could challenge Watson in the final 200m. The meet record of 2:03.46, last accomplished by Alexa Efraimson in 2016, is likely to go down here.

Outside of the top two candidates, this will be Heymach's third straight appearance in Brooks PR and her second attempt at a fast 800m -- her last earned her a third-place outing. Brewer has probably the best kick outside of McArthur and is a proven winner, while Kristie Schoffield recently won the New England Championships in 2:06.90. Utah's Kate Hunter and New Hampshire's Leya Salis could be solid sleeper candidates to finish in the top five as well.

We're hoping the race goes out in 60 in the first lap and Sammy Watson splits a negative 400m to hold on for a sub-2 performance, challenging Mary Cain's national record of 1:59.51, which was set back in 2013.