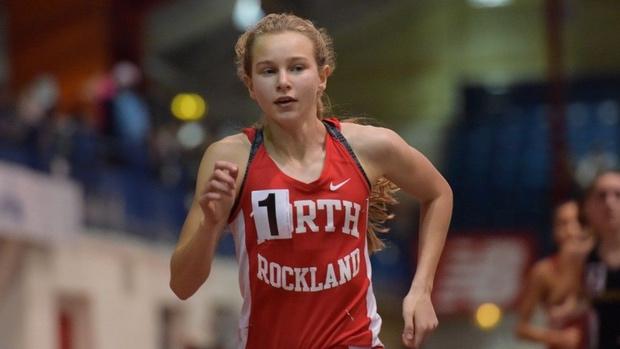 Every ounce of Katelyn Tuohy was begging to run the elite high school girls mile at the New York Road Runners' Millrose Games in February.

The North Rockland (NY) High School freshman had been invited -- it was her second straight bid, in fact.

For many who had seen the youth distance sensation race, there was no issue as to whether she was ready: She owned a U.S. No. 1 time of 4:48.29, which she scored in January.

But her coach, Brian Diglio, held her out anyway -- in favor of the 4x400m relay -- and the pair both watched as Germantown Academy (PA) High senior Abbe Goldstein went on to win in 4:49.06.

In some ways, Tuohy, 14, was frustrated by the decision -- after all she's still a teenager. But she didn't hold a grudge for too long.

On Saturday, she finished second in the 1500m at New York's indoor championships, clocking a 4:25.86, an indoor best.

Moving ahead to March 10-12, Tuohy will get her shot on a national stage, only it won't be for an individual medal. Instead, the freshman will contribute to the team's sprint medley and distance medley relay teams.

"For me, it's just about running as fast as I can," Tuohy said.

Diglio knows what she means. It's not easy telling a competitor when they aren't going to race. But he knows there's a bigger plan.

It's an issue he also has to tackle, if only because Tuohy is treading on rarefied air here … it's not like he has a manual on 'How to Coach Phenom Runners.' 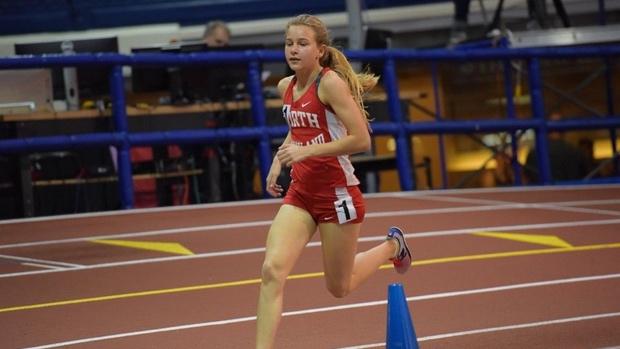 But Diglio is also fortunate. In recent years, former national class high school distance girls such as Cain and Alexa Efraimson have paved the road for future stars on the track.

Both are professionals now, just a few years removed from their high school careers. Efraimson, who graduated the class of 2015, finished sixth in the 1500m at the US Olympic Trials finals in July, missing the standard by just one second. Cain, a year older than Efraimson, crossed the finish in 11th.

Their early entry into the professional ranks is an ongoing process -- the immediate success predicted for both hasn't happened just yet.

But their trials are providing insight to runners of the immediate future.

Minnesotan Grace Ping, an eighth-grader at Winona Cotter, holds five age group records on the track and has three world records on the road. She's flourishing at a young age, too. Some feel Tuohy is on a path just like those before her.

Diglio wants her to understand that a career has no set plan -- sometimes you must wait to get better.

"Knowing how successful I am at a young age, I want to keep improving in high school and college," she said. "I love running, but I want to do it as long as possible and keep succeeding."

Which is why Diglio is careful. He doesn't want to burn that passion away. So far,  he's held firm.

"My philosophy is this," he said. "My goal as a coach isn't to get every single drop out of my athletes. It's a challenge for girls because sometimes as their body changes, sometimes they don't progress, but I don't want Kate to max out in high school. I want her to go to college and compete and get better."

As a result, Tuohy's freshman indoor season has been a steady stream of success.

She's competed in everything from the 600m to the 3000m, issuing nationally ranked times in the process.

Diglio's main desire is to keep the freshman focused on one race at a time. He hasn't placed Tuohy in more than two events this season.

"I never liked piling on races, I think high schoolers race too much already as it is," Diglio said. "The hardest thing with Kate is holding up the reins."

Perhaps Tuohy's most eye-opening effort came at the Ocean Breeze Freedom Games in January, when she raced against U.S. No. 1 Kate Murphy, a University of Oregon signee, in the 3000m.

Murphy closed the debate within the first 1500 meters as to whether she'd have a challenger, leaving Tuohy in her wake. The performance gave Diglio a glimpse into the headspace of his athlete. 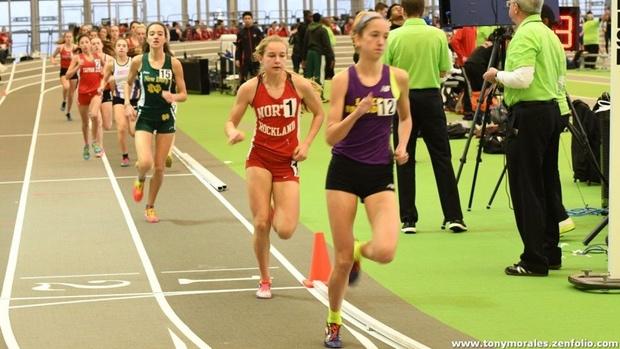 "She disengaged from the 1500 probably until the 2400," he said. "It looked like she was just out there spinning wheels, not doing much of anything."

While Tuohy finished in a personal-best time of 9:42.63, which was good for U.S. No. 3, Diglio wasn't impressed. He urged her to consider the alternative: if she raced hard the entire way, she could have easily broken 9:40.

"She handled it well," he said. "She was upset afterward in getting beat, but like she does most of the time, she learned from the experience and I think she grew from it."

For the most part, Tuohy is cognizant of her ability and growing talent, too.

In the fall, she finished 13th overall at Nike Cross Nationals in Portland, becoming The Lower Hudson Valley Journal News' Runner of the Year just a few months into her high school career.

The fallout was such: Fans began to rush over to her for autograph at meets -- "Are you the next best thing in distance running?" they would ask. She obliged, signed autographs and remained polite.

"There have been a few times when it's been a little weird, but it makes me happy and confident in myself," she said of those moments. "It makes me realize people are recognizing what I'm doing on the track."

In the meantime, it won't get any easier. As her exposure continues to grow, so too will the expectations and the predictions placed upon her.

But Tuohy says she's focused on what she can control.

Diglio knows there will come a time when he's going to have to let loose his starlet on a national stage in races against premier talent that will inevitably answer the question whether she can keep up against the country's best.

But until that happens, the pair will stick to the plan. And that's concentrating on one race at a time.

"We're looking ahead when I'm older like the big meets," she said. "When I'm older, there will be big invitationals and I want to keep getting better. It's important to look ahead and keep doing what's right for me."

To connect with Milesplit Content Producer Cory Mull, follow him on Twitter @bycorymull. Have a story idea? We're all about those. Email him at cory.mull@flosports.tv. To have access to year-round stats, breaking news, stories and videos, register for MileSplit here.