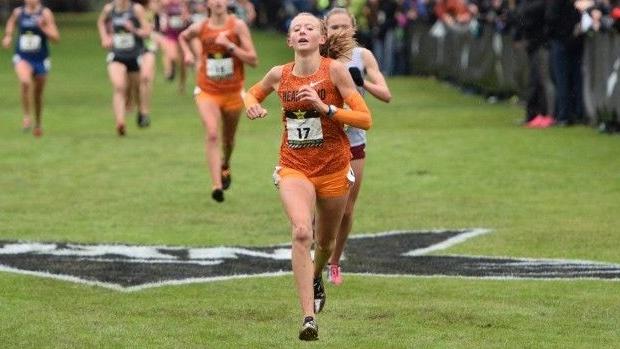 The nation's top returner to NXN, Cailie Logue of Girard High School, will not return to Portland for this year's championship. She ran within the top five individual runners for nearly the entire 5K at the Heartland Regional, but fell in the final 100 meters and was unable to recover in qualifying position. The No. 2 ranked cross country runner in the nation did eventually resume the race and crossed the line in 59th place with a time of 18:45.1.

Logue falls with less than 100 meters to go. Does not qualify for NXN #NXNHL https://t.co/qRd9wwewgH pic.twitter.com/jo6PuDufsE

Fellow Kansas runners Molly Born (ranked #19 in the nation) and Emily Venters swept the top two spots in 16:49.3 and 16:56. Born's time appears to be a new meet record.

Logue, who will run for Iowa State next year, placed third at Nike Cross Nationals in 2015 and was considered a top title contender heading into the regional meet. Luckily, she still has a shot at a national championship berth and possibly a national crown as the Foot Locker Midwest Regional is held on November 26.

The other NXN individual qualifiers from the Midwest region are eighth-grader Anna Fenske of Farmington, Minn. (third, 17:00.4), with whom Logue was battling for the lead before her fall; Fenske's teammate, Lauren Peterson (5th, 17:22.3); and North Dakota state champion Karly Ackley (4th, 17:13.8).

Based on early results, the two team auto qualifiers for the girls appear to be No. 7 ranked Edina and No. 6 Willmar, both of Minnesota.