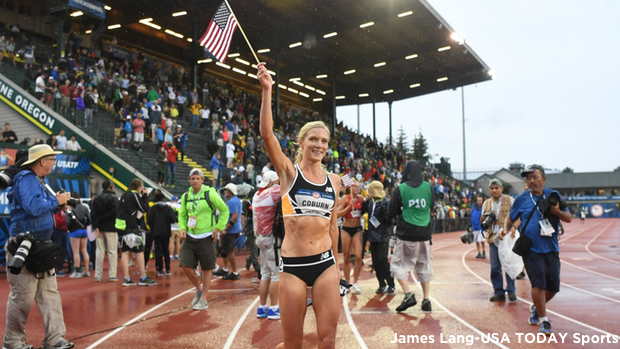 The Rule 40 blackout period begins July 27th and runs through August 24. In that time, non-Olympic sponsors and their athletes and coaches may not speak about each other in any form--that means no retweets, no mentions, no nothing.

Oiselle founder and CEO Sally Bergeson wrote a great post explaining the rules, regulations and messiness that are Rule 40.

On the eve of the blackout, check out what some of the world's best track and field athletes, coaches and non-Olympic sponsors had to say in their final hoorahs to those who shall remain nameless until August 24.

Finding my strong for the last 9 years-Thank you for supporting my Olympic Dreams @saucony ! pic.twitter.com/YTk2aRO6BT

#Rule40 starts tomorrow so I won't be able to say Thank You to my sponsor. THANK YOU FOR EVERYTHING @newbalance  pic.twitter.com/udSEIPhsIA

#Rule40 starts tomorrow, which doesn't impact us lowly non-Olympians except by discouraging non Olympic sponsors from investing in athletes.

From London to Rio, and everywhere in between, I'm always proud to wear NB!  pic.twitter.com/RTz5dPbBT5

#Rule40 is a tough one for me. I want to be able to brag about helping support @des_linden over the past decade. But it is about her not me.

Before #Rule40 starts THANK YOU @adidasrunning @adidas for supporting me on this journey! #LetsBeGreatInRio pic.twitter.com/PmWIlSM7QU

THANK YOU to Saucony for 7 years of support! Proud to represent this company on my #RoadToRio #Rule40 pic.twitter.com/qpRZu2skEh

and major  to @oiselle pic.twitter.com/iyeKjlJlJP

With #rule40 starting tomorrow, I want to say one last "THANK YOU" to @ArmyWCAP for all you let me do. It's an honor pic.twitter.com/KkqCCS4bPA

Due to #rule40 I can't post about any of my sponsors after tomorrow. So today I just want to give a huge shoutout to the team I have been blessed to work with this season. Thank you to @fl2 @fabletics @nike @redbull and @ionmellc for helping me chase my Olympic dreams! I am going to do everything in my power to make you all proud! #ELEVATE

Not really sure about this rule 40 thing, but I better respect it since it's been around as long as the Olympics....  .... Sounds like some Hogwarts High Inquisitor Educational Decrees to me = Thank you @brooksrunning @sword @realrehabpt @inhealthseattle @oakley @ntrecovery @dickssportinggoods @pickybars @pureencapsulations #Decathlon #USA #Rio2016 #Olympics #BlackOutForAGreatCause #Lol

#Rule40 starts tomorrow, so a special shout out to the companies that have supported me for years. Back to Rio in only a few short weeks & I wouldn't be able to do it without an incredible team around me. Through good times & bad, my sponsors have been there supporting me in my Olympic quest. Thank you @tyrsport @usatriathlon @wahoofitnessofficial @saucony @bikeonscott @nulopetfood @oakleyendurance @rideshimano @pioneercycleusa @newyorkac for everything!