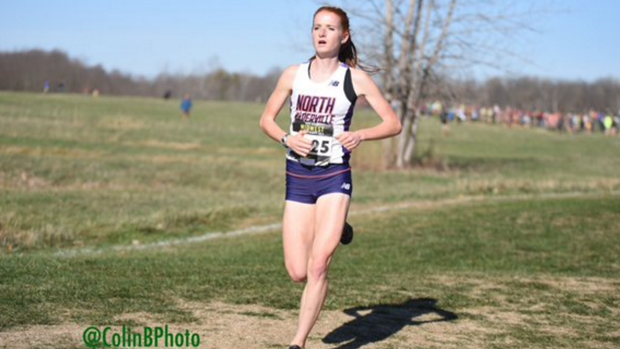 Judy Pendergast on her way to breaking the NXN Midwest course record in 17:01.

The Nike Cross Nationals qualifying process for teams is pretty straight forward. The top two teams at each regional automatically qualify for the championship in Portland, Ore. Teams that place third or fourth have a chance to earn one of four (4) at-large bids based on in-season performance record. At-large bids are announced upon conclusion of the regional meet series on Saturday, Nov. 28.

How did the 2015 NXN Midwest Regional throw a wrench into this system? Here are the facts:

1. The Centerville girls from Ohio clearly earned the first NXN spot upon conclusion of the race

2. It was a very tight race behind between Northville, MI and Naperville North, IL to become the final team qualifier

3. At the award ceremony, team scores were announced as follows

Now here is where we get into some murky waters. After the results were added to the site, I noticed there was a discrepancy in the team scores. After checking over the individual finishers to confirm the accuracy, our results kept displaying the top three teams with this outcome:

What is the cause of this difference? McKenzie Altmayer. Altmayer, who is a senior from Illinois, finished 16th. While listed in the results as "Unattached", Altmayer runs for Geneva High School...Geneva High School had a team (5 athletes) entered in the girls championship race.

That move is what would change everything. Affiliated with a team, Altmayer now displaces all runners who crossed behind her 16th place finish. That alteration would result in a dramatic change in the team scores because Naperville North placed one runner ahead of Altmayer, while Northville had no one. That one point shift puts the two teams into a tie breaker scenario. Emory Griffin at 71 would give Naperville North the second qualifying spot at Nationals. Team Score breakdown below:

The meet representative we spoke with confirmed that they will move forward with the original scores. Counting McKenzie Altmayer as an unattached individual, and not a member of the Geneva team that competed in the girls championship race.

By no means is it the intention of this article to call into question McKenzie Altmayer, Naperville North, or Northville. All athletes competed extremely well, and regardless of the outcome, produced one of the most exciting races of the day. This highlights the difficulty of competing in the post-season as members of clubs instead of high schools. It's not uncommon to see an individual enter unattached into the championship race if their team is weaker and competing in one of the open/varsity races at their NXN Regional, though this instance was clearly different.

It's an interesting scenario magnified in this situation by its impact on the coveted auto qualifying NXN spots. What are your thoughts? Running in the same race as her team, should Altmayer have counted with Geneva? In your opinion, should the 2nd auto qualifying spot for Nike Cross Nationals have been awarded to Northville or Naperville North?