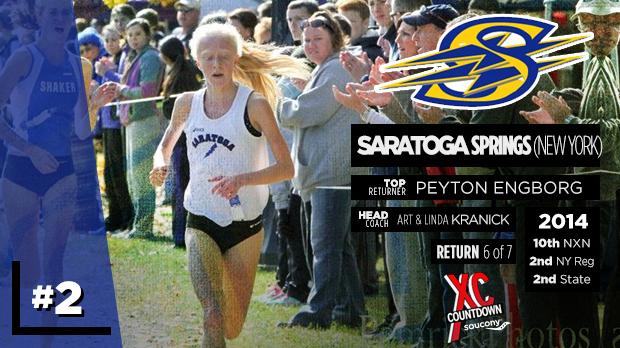 If Fayetteville-Manlius sets the present standard for girls cross country running, then Saratoga Springs is the original powerhouse. They consistently pulled in U.S. No. 1 rankings years before the advent of the NXN Championships. In 2015, the Blue Streaks could once again claim the top spot - in both the state of New York and the nation. They return six of seven varsity runners from the team that placed 10th in 2014.

Peyton Engborg was Saratoga's top runner at NXN last year, placing 86th (42nd in team scoring) as a freshman. However, odds are that the new leader will be a current freshman, as incoming ninth-grader Kelsey Chmiel has already competed at an elite level in middle school. Chmiel clocked impressive times of 9:52.87 for 3000m (third in NY state meet) and 4:35.71 for 1500m this spring; those times are noted as faster than Nicole Blood's times at her age. She also seems to have the engine for long distance running, as she clocked 17:41 for 5k at a local road race this summer.

Saratoga's biggest obstacle will be its own youth. Of the returners from NXN last year, there were four freshmen, one eighth-grader and one junior. Will last year's experience be enough to prepare them to catapult from double digits to a podium spot?