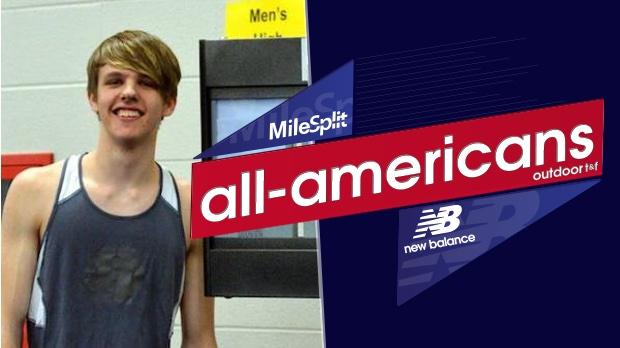 1. Jaron Brooks (Henry Clay, KY- Jr.) - The junior has pulled together an impressive postseason stemming all the way back to his state meet. The three time state champ capped off his season winning NBNO clearing his PR of 7-1.5, and placing 2nd at the USATF World Youth trials (6-11). He was also the New Balance Indoor Nationals champ this winter (6-11.5).

2. Blaine Listach (Waco Meyer, TX - Sr.) - The senior was undefeated all year except for his single loss at the Texas Relays, where he placed fifth clearing 6-6. His wins include his Texas regional meet where he cleared a PR of 7-2, the TTFCA Meet of Champs (6-6), and the Texas State Meet (6-10).

3. Ben Milligan (Sherwood, OR - Sr.) - The Oregon commit jumped his PR early in the season clearing 7-1.5 at the 51st Annual Centennial Invitational. After that, the senior had several wins including his first ever Oregon state title (6-11). Milligan capped off his season at his future home track finishing fourth at USATF Junior Championships, clearing 7-0.25 as the top high school competitor.

4. Brendon Rivera (Edinburg Vela, TX -Sr.) - The senior had a stretch of seven undefeated meets, including the Texas State meet. His first loss was at the TTFCA Meet of Champions, where he placed third clearing 6-4. He capped off his season winning the Great Southwest Classic (6-10.25) and placing 6th at the USATF Junior Champions (7-0.25).

5. Lath Kisling (Sarcoxie, MO - Jr.) - Kisling holds the best jump in the country after clearing 7-3 at his conference meet. The junior is a four time state champion.

6. Milton Harrell (Tylertown, MS - Jr.) - The three-time Mississippi State champ is ranked U.S. No. 2 (7-2) in a three way tie with Brendon Rivera (TX) and Blaine Listach (TX). The Junior cleared the 7-2 mark at his regional meet.

7. Shelby Mcewe (Oxford, MS - Sr.) - Mcewe is the Mississippi State Champion in the high jump clearing 7-0. His jump of 7-0.75 that he jumped at the Peak Performance Invitational Track Meet ranks U.S. No. 7. The senior placed second at NBNO, clearing 6-9.5.

8. Michael Burke (Lemoore, CA - Sr.) - The UCLA recruit is one of the most consistent jumpers in the nation, with two jumps this season over the seven-foot mark to win the Golden West Relays and his Central Section-Central Area Championship. He was undefeated in 2015, including the Mt. SAC Relays and the California state meet.