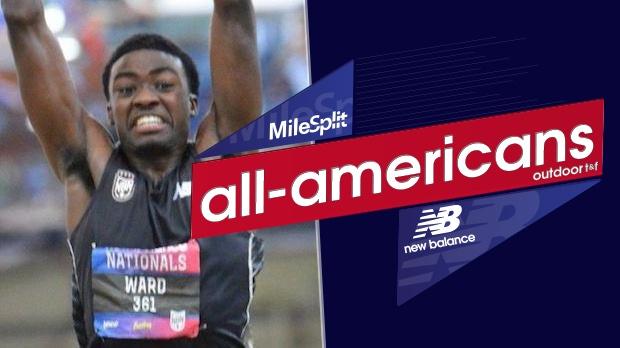 1. Ja’Mari Ward ( Cahokia High Schol, IL - Jr.) - The defending indoor national champion for both long and triple jumps was unable to defend his crowns outdoors due to injury, though he still enjoyed a dominant season that included a best of U.S No.1 51-11, more than 17 inches ahead of the second-ranked jump in the nation. He won the Illinois state meet and the Caribbean Scholastic Invitational, while placing runner-up at the Great Southwest Classic behind Miguel Van Assen of Surinam.

2. Kerwin Roach ( Galena Park, TX - Sr.) - The University of Texas basketball recruit certainly has ups. He was undefeated in 2015, including a clean sweep of the Texas Relays and Texas state meet. His best jump of 50-6.5 ranks U.S. No. 2.

3. Myles Hartsfield ( Sayreville , NJ - Sr ) - The former football star competed just twice in 2015, but sheer athleticism carried him from All-American honors with a fifth-place, 48-7.5 jump indoors to winning the national title with a U.S No. 3 jump of 50-5 at NBNO.

4. Darius Bredwood (Kell, GA - Sr.) - The senior’s best effort prior to nationals was a 47-1 to placed third at the Georgia Olympics into a -2.2 headwind, but he put it all together in Greensboro with a huge 50-3 (+2.3) jump to place runner-up at New Balance Nationals Outdoor. He ends the season ranked All-Conditions U.S. No. 7.

6. Rayvon Grey (Beacon, NY - Jr.) - The junior made tight work at New Balance Nationals Outdoor, placing fourth in both the long and triple jumps. He was just third at the New York state meet but nailed a huge two-foot personal best in Greensboro to earn his second consecutive All-American honors in the event. He ranks All-Conditions U.S. 16 with 49-7 (+3.2).

7. DJ Ledell (River Bluff, SC - So.) - The sophomore won his second consecutive South Carolina state title in a U.S. No. 5 ranked jump of 49-8.5. He narrowly missed out on All-American honors at New Balance, where he placed seventh overall.