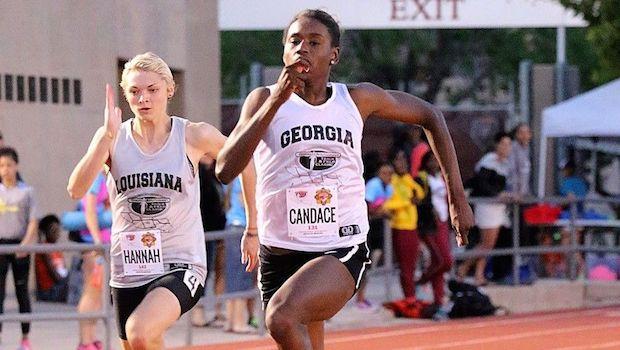 Arguably the most competitive and deepest events to make the 2015 World Youth team for the United States will be in the girls sprints and hurdles led by strong World Youth gold medal contenders Candace Hill, Sydney McLaughlin, and Sammy Watson.

Leading the 100 and 200 meter dash fields will be high school national record holder in the 100, Candace Hill from Georgia, who ran her national record and World Youth leading time of 10.98 at the Brooks PR Invitational two weeks ago in Seattle. Hill, who also notched major wins this year at the adidas Dream 100 and Prefontaine Classic 200, is also ranked #2 among World Youths in the 200 meter dash with a wind legal 23.05 season best. Only last year's World Junior 200 meter champion and now Nike professional Kaylin Whitney, has run faster, but she will not be competing on the World Youth stage.

Hill could certainly go for double gold individually in Cali, Columbia at the 2015 IAAF World Youth Championships barring no false starts or injuries. Knock on wood. 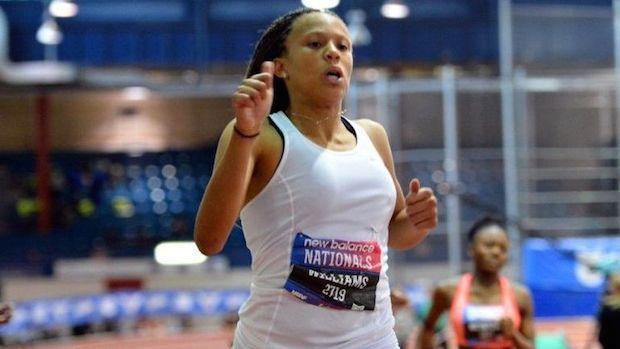 Next big name in the girls 100 and 200 at the World Youth Trials will be New Balance Nationals Indoor 200 meter dash champ and California outdoor 100 as well as 200 state runner-up Lauren Rain Williams. The sophomore from Oaks Christian has been one of the country's and world's fastest at each age group growing up in the summer track ranks, but now has her first opportunity to qualify for her first U.S. team. 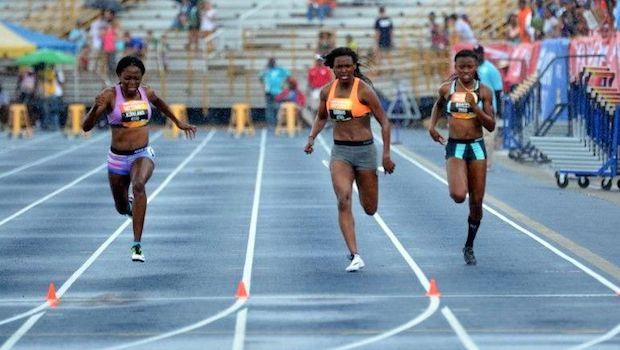 Coming into the World Youth Trials with almost as much momentum from her last meet is New Balance Nationals Outdoor 100 and 200 meter champion Jayla Kirkland. The sophomore from Woodlawn High School in Alabama. Both victories in Greensboro were mild surprises as Kirkland was certainly not considered a favorite to win both.

Her 100 meter performance was a personal best of 11.33, but wind-aided while her 200 meter win was the exact opposite of running into a fierce headwind, yet a season best time of 23.71. She certainly could go much faster in the 200 and will be in the running for a top two finish in both the 100 and 200 in Lisle, Illinois.

Indiana state champion sprinter and sophomore Lynna Irby could also grab a World Youth team spot in both the 100 and 200. Irby has swept the sprint titles (100, 200, and 400) at her first two Indiana State Outdoor Track & Field Championships. Irby is ranked US #8 in the 100 meter dash from her third place finish at the Golden South Classic with a 11.47 clocking. She also dipped under 24 seconds for the first time in the 200 at the Indiana State Meet with a 23.85 clocking.

Others to watch out for in the 100 and 200 include two from Florida in sophomores Twanisha Terry of Miami Northwestern and Symone Mason of Miami Southridge. Both were national runner-ups at New Balance Nationals with Terry taking second in the 100 to Kirkland with a 11.34 PR, while Mason was second in the 400 with a 53.07 PR. Mason is also ranked US #5 in the 200 with a 23.37 PR, while Terry is US #10 with a season best of 23.55. 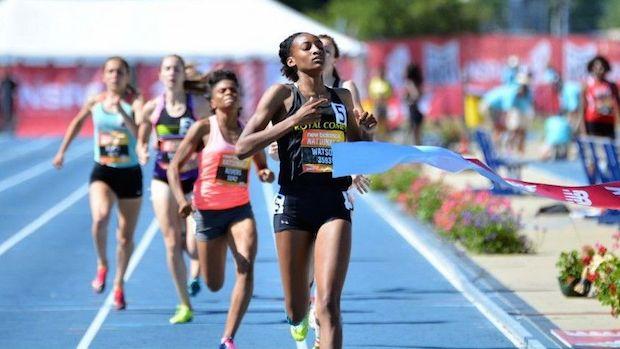 Speaking of the 400, another stacked field for the World Youth Trials with only two spots on the U.S. team to go around among many hopefuls. Top entrant is two-time New Balance Nationals 800 meter champion Sammy Watson from Rush Henrietta Sperry in New York. Watson is currently World Youth ranked #2 in the 400 from her 52.69 PR in winning the New York state title earlier in June.

The bigger question for Watson will be which race between the 400 and 800 will she focus on this week at World Youth Trials. She has entered both like she did at New Balance Nationals, but opted to scratch the 400 to focus on the 800. She ran a 2:03 800 anchor leg on a national record breaking sprint medley relay. After making the 800 her focus two weekends ago, she may want to switch her focus back to the 400 for World Youth Trials and Championships.

If she opts to do the same and scratch the 400, it will open up things more in the event among a pack of girls who have run times ranging from 53 to 54 seconds. Outdoor national runner-up Mason leads that group after her US #5 53.07 run in Greensboro, while not far behind her in the national rankings is McKinley McNeil (Parkland NC) at US #13 53.40 and Serenity Douglas (Archer GA) at US #14 53.42.

Others to contend in the girls 400 will be Virginia state champion Lauryn Ghee from Grassfield and Texas state champion Takyera Roberson from Houston Wheatley. Both have yet to break 54 seconds, but on the verge especially Ghee who ran 54.09 two weeks ago in Cuba at the Caribbean Scholastic Invite. 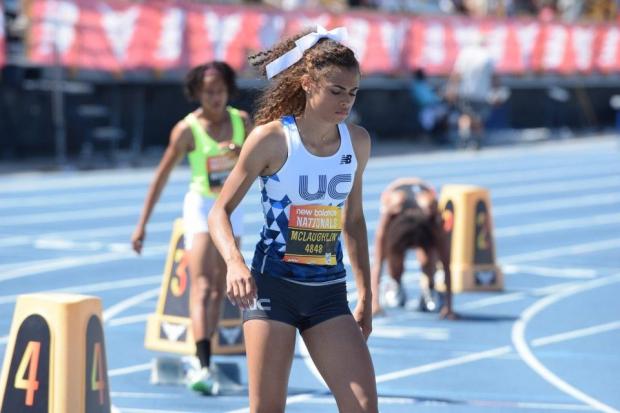 The national freshmen and sophomore class record holder in the 400 meter hurdles, McLaughlin is not only a World Youth leader in the 400 meter hurdles with her 55.87 season best, but ranked US #2 all-time in the event. The Union Catholic (NJ) sophomore McLaughlin would have qualified last year for the World Junior team based on her second place finish at the 2014 US Junior Nationals, but was too young to make the team as a 14 year old. Now as a 15 year old, McLaughlin is age eligible to compete on the World stage this year in the World Youth Championships.

She is seeded nearly two full seconds faster than the next best entrants at the World Youth Trials, so if she runs a clean race, McLaughlin should be moving onto the international stage for the first time. It potentially could be a race for the final World Youth spot between two talented sophomores from California in Jurnee Woodward and last year's 300 meter hurdles state champ Reonna Collier.

Collier was a runner-up this past weekend in Oregon at the US Junior Nationals in the 400 meter hurdles with a 57.72 PR, which ranks her US #4. Another US Junior Nationals competitor doing the quick turnaround is Utah state champ Elsja Mecham, who clocked a US #5 time of 58.27 in the prelims in Eugene before ultimately finishing fourth in the finals.

Woodward is actually Collier's teammate at Vacaville High School in California, but the US #3 ranked 300 meter hurdler Woodward (41.10 PR) didn't get a chance to race with Collier this spring as Collier was not eligible to race in varsity competitions with her school due to transfer rules. They might be racing against each other for the final spot to Columbia behind McLaughlin, but Woodward needs to bounce back from a disappointing 400 meter hurdles season debut at the New Balance Nationals when she finished 13th with a time of 1:01.32. 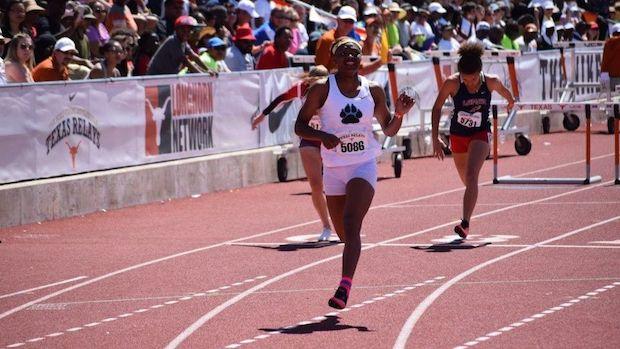