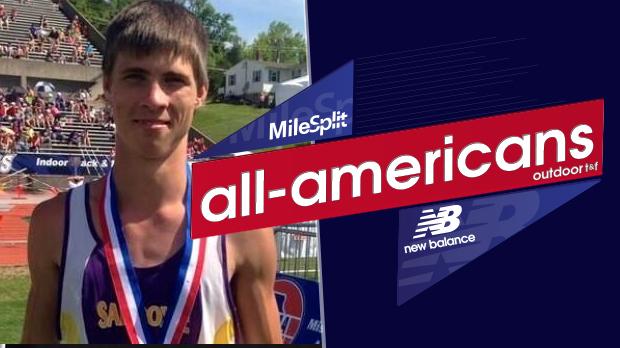 Lath Kisling of Sarcoxie, MO recorded a huge five-foot PR in the high jump with his nation-leading 7-3 last weekend.

2. Jaron Brooks (Henry Clay, KY - Jr.) - The junior made huge improvements over the winter to transform from a 6-4 jumper in 2014 to the New Balance Nationals Indoor Champion with a PR of 7-1. Brooks has stayed consistent, clearing 7-0 at the Fayette County City Championship to tie for U.S. No. 7.

3. Grant Holloway (Grassfield, VA - Jr.) - The junior is likely the most well-rounded athlete in the class of 2016. The New Balance Nationals Indoor Champion over 60-meter hurdles finished runner-up to Brooks in the high jump. Holloway owns a PR of 7-1; his best this season is 6-9.

4. Blaine Listach (Wace Meyer, TX - Sr.) - After a slow start to the season that saw him place only fifth at the Texas Relays, the defending Texas State Champion is building momentum at the right time. Listach, who has recorded six jumps at seven feet or better in competition, is tied for U.S. No. 2 with his 7-2 PR and season-best.

5. Milton Harrell (Tylertown, MS - Jr.) - The two-time Mississippi State Champion will seek his third consecutive state victory this weekend. Harrell recently recorded his first-ever jump over seven feet, 7-2, to tie for U.S. No. 2. He is undefeated in the event since 2012.

6. Brendon Rivera (Edinburg Vela, TX - Sr.) - Rivera won the USATF National Junior Olympics last summer, where he recorded his first-ever seven-foot clearance. The senior is undefeated this outdoor season with a PR 7-2 to rank U.S. No. 2.

8. Jeff Giannettino (West Burlington, IA) - Giannettino is the only three-time Drake Relays Champion in the high jump. He has recorded three career seven-foot jumps in competition, but it was at the most recent Drake Relays that he set his PR of 7-1. He ranks U.S. No. 6.

9. Bradley Jones (Oscar Smith, VA - Sr.) - The three-time All-American most recently won a gold watch as the runner-up and top American at The Penn Relays. The consistent championship performer has cleared 6-10 in competition four times, but has yet to crack the seven-foot barrier. Could 2015 be the year?

10. Isaiah Kyle (Morristown, TN - Sr.) - With a slew of eight jumpers tied at U.S. No. 6 with a season-best of 7-0, who better than Kyle to emerge as a star? The senior set the Meet Record in the Emerging Elite section of the high jump at New Balance Nationals Indoor 2014 before earning All-American honors in the Championship section this year.