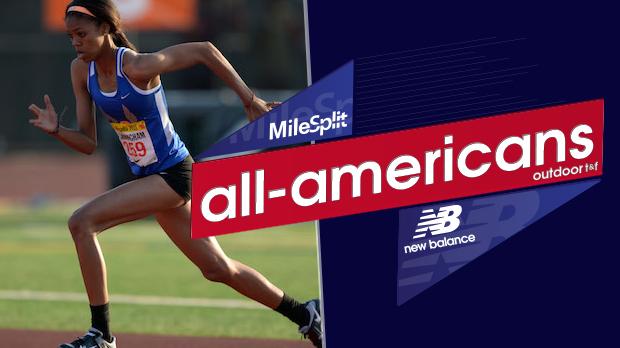 Vashti Cunningham of Bishop Gorman, NV set the National High School Record in the high jump with her 6-4.25 leap at the Mt. SAC Relays.

1. Vashti Cunningham (Bishop Gorman, NV - Jr.) - Cunningham set the National High School Record in the high jump at 6-4.25 in winning the prestigious Mt. SAC Relays. What hasn't she won? While the junior has never competed at New Balance Nationals, her winning streak extends all the way back to 2013 through two state championships and two AAU Junior Olympics wins.

2. Nicole Greene (Ponte Vedra, FL - Sr.) - The UNC-Chapel Hill commit is having a standout senior year, clinching the victor's title at both the New Balance Nationals Indoor Championship as well as the Florida State Championship. The prolific jumper has six career jumps over six feet, including her PR of 6-0.5. She is tied for U.S. No. 2 on the outdoor leaderboard with a season-best of 6-0.

3. Tyra Gittens (Ensworth, TN - So.) - The young up-and-comer has already reached elite status in jumping six feet, a PR this season to tie for U.S. No. 2. Only four girls have jumped six feet this year. She won the Tennessee State Championship as just a freshman last year.

4. Alexus Henry (Bridge City, TX - Sr.) - The multi-event athlete emerged as a star in winning the Texas Relays in March with a then-PR of 5-9.5. Since then, Henry has jumped six feet twice to tie for U.S. No. 2. She is the defending Texas Class 4A State Champion.

5. Janae Moffitt (Oak Hill, IN - Sr.) - The senior is the top returner from the 2014 New Balance Nationals Outdoor Championship, where she earned runner-up honors. She followed that with a runner-up finish at the World Youth Olympic Games. Moffitt jumped her PR of 5-11 this year at the Marion Relays to tie for U.S. No. 5.

6. Cyre Virgo (Fleetwood Area, PA - Sr.) - The senior has had her ups and downs at the national level, but appears to be on the upswing in 2015 as of late. In 2013, Virgo won New Balance Nationals Indoor and The Penn Relays before faltering to a 12th place finish at NBN Outdoors. She was runner-up in 2014, then 17th at the most recent edition of New Balance. But this spring, she repeated her title at The Penn Relays while hitting an all-time PR of 5-10.5 that ranks U.S. No. 7.

7. Stacey Destin (Santaluces, FL - Sr.) - Destin has struggled as of late, finishing just fourth at the Florida State Championship, but she has two in-competition career jumps over six feet and is a consistent 5-10 to 5-11 performer. She ranks U.S. No. 5 with her season-best 5-11 jump to win the Palm Beach County Championship on April 1.

8. Erinn Beattie (Buena, CA - Sr.) - The only athlete to get the better of Beattie this spring is National High School Record Holder Vashti Cunningham. The senior tied her PR of 5-10 (U.S. No. 8) at the Arcadia Invitational in placing runner-up to Cunningham and is heading into the post-season with momentum. Beattie placed fifth at the California state meet last year after recording the second-best mark in prelims.

9. Katie Isenbarger (Zionsville Community, IN - Fr.) - Freshman Isenbarger is on the rise. With just six career jumps in competition at the high school level, this up-and-comer has already recorded two marks at 5-10 to rank U.S. No. 8.

10. Taylor Pennington (Center Grove, IN - Sr.) - It's tough to win a state championship when you compete in the same division as World Youth Olympics medalist Janae Moffitt. Pennington has built a solid resume in Indiana, recording a career-high runner-up finish at the state meet and a new PR of 5-10 to rank U.S. No. 8.