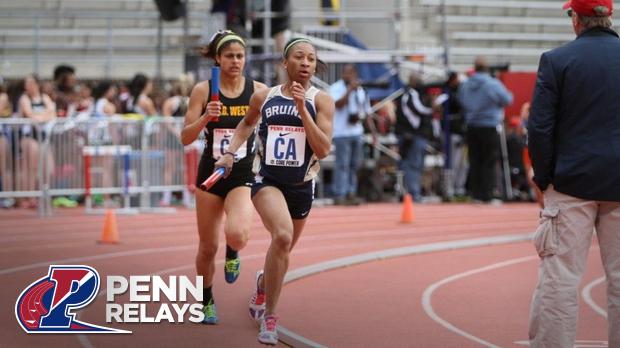 Friday, April 24 marks Day 2 of an action-packed weekend of track and field at The Penn Relays Carnival at the University of Pennsylvania's Franklin Field. Detailed below are all high school individual championship events and relay Championship of America events for Friday, April 24.

Jamaican squads have won this event for 25 of the past 29 years - though Americans took home the wheel the last two years. New Balance Nationals Indoor champions Western Branch (VA) advanced with the fastest time of the day in 9:09.43, as Alexis Thomas (2:11.11) clocked the fastest split of the day. They ran 9:02.27 indoors. Seven-time event champion Vere Tech (JAM) won the Small Schools section and advanced with the second-fastest time of the day at 9:10.31. The only other schools racing under 9:20 were Cornwall (NY) at 9:17.28 and Unionville (PA) at 9:18.57.

Denzell Pratt (St. Augustine, BAH) is the defending champion at 220-7, the No. 6 All-Time performance at the Relays. Nick Solfanelli (Scranton Prep, PA) is the top American with a 215-8 personal best. The Duke commit was runner-up at 2014 New Balance Nationals Outdoor and placed 8th at Junior Nationals.

Expect plenty of shake-up and faster times as many teams ran without top runners. St. Jago (JAM) won Jamaican Champs in 3:35.78 and advanced as fastest qualifier with their 3:46.54 while running without their 'A' team.

Expect a two-man showdown between All-Americans Eric Favors (North Rockland, NY) and Jordan Geist (Knoch, PA). Favors was the runner-up at New Balance Nationals Indoor and owns a personal best of 66-1. Geist has a 66-1.5 best to make this a close battle.

Fordham Prep (NY) enters with the top time of 10:07.27, per an All-American fourth-place finish at New Balance Nationals Indoor. Junior Conor Lundy was the secret weapon in that race, splitting 4:11 for 1,600m; he also split 1:53 to lead the quartet to runner-up honors in the 4x800m at NBN. Top challengers include La Salle (RI), anchored by 4:08 miler Jack Salisbury.

Can Drew Hunter pull a Matt Centrowitz at Penn?