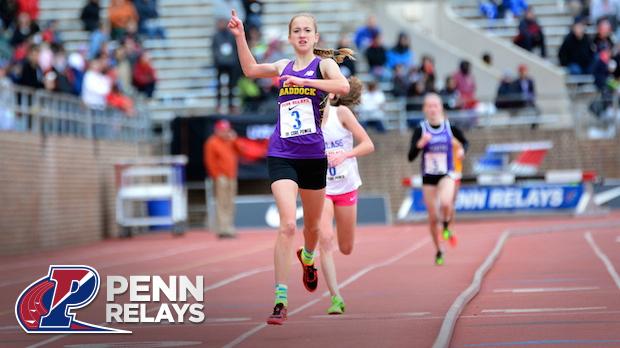 Virginia's Kate Murphy admitted she gained more confidence in her ability after finishing second in the two-mile run at the New Balance Nationals this past March.

It might have been boosted a notch on Thursday during Day 1 of the Penn Relays Carnival.

Breaking away from fellow state rival, Libby Davidson of Glass, with a little more than half of lap remaining, the Lake Braddock sophomore cruised to the individual title in the 3,000-meter run with a nation best of 9 minutes, 32.82 seconds. Davidson secured a 1-2 finish for the Virginians by securing runner-up honors with a 9:34.12 (US #2).

"It feels really amazing, Virginia represented here at Penn," said Murphy, her state's 1,600m and 3,200m titlist. "It's just awesome how we got one and two."

Defending champion Hannah DiBalsi did the early front-running. She led the pack though an opening 5:10 mile. But the Staples, Ct., junior soon fell off the pace and struggled to an eventual sixth-place in 9:51.33.

Davidson took over the lead with a few laps left and kept that position until she was passed by Murphy.

"The plan was to just stick with the leaders and then out-kick them at the end," said the tenth-grader, "During five or six, it started slowing down so I just wanted to get back on pace and then Libby took the lead after that and then she started getting a little gap and then I closed it with about 200 (left)."

Davidson has high expectation before the season reaches its end. 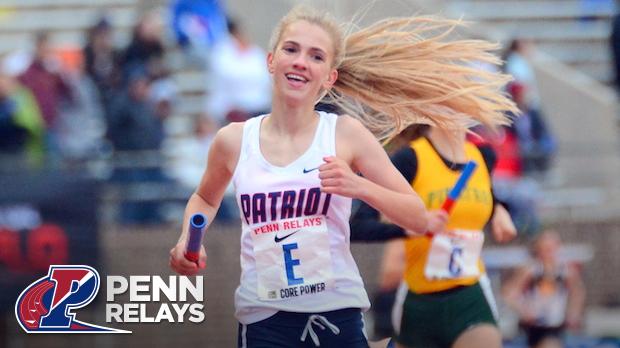 With her team trailing in fifth place after the first three legs of the DMR, the sophomore from Patriot, Va., uncorked a sizzling mile leg, enabling her squad to capture the Championship of America event at the Penn Relays Carnival with a nation No. 1 of 11 minutes, 51.85 seconds.

"We got all the faith in the world in Rachel," said senior teammate Candace Jones, who clocked a 3:42 for her opening 1,200m leg. "She's so strong. She finishes so well. I definitely didn't have any doubts in my mind that she could win."

McArthur, who owns a best of 4:53 for 1,600m, hunted down West Windsor-Plainsboro South (second, 11:54.49) and fellow Virginia squad and early-race leader Blacksburg (third, 11:57.69) with a patient approach. She overtook Blacksburg's Jenn Fleming on the backstretch with roughly 300m remaining.

"I kind of just wanted to maintain the pace and see how it went," she said. "I started picking up at the 800 because I thought I might as well try and go for a good time and they started dropping off and I started thinking their kick wasn't as strong as mine. I started kicking earlier than I usually do and it kind of worked well. It went a lot better than we all expected it to go." 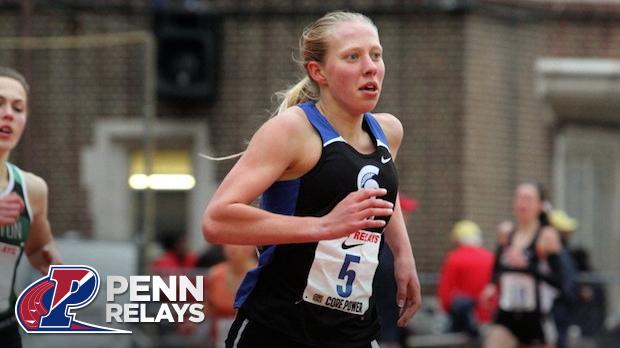 With a strong field with no clear-cut favorite, Malia Elllington never intended to take the pace out hard in the Mile run at the Penn Relays Carnival. The senior from Davidson, N.C., just wanted to bide her time for the first half of the race and go to work the final two laps.

It was a plan that worked to perfection on Thursday night inside Franklin Field.

Ellington took control at the 800-meter mark and then fought off a gallant effort by Sage Hurta of Hamilton Central, N.Y., over the final stretch to win with a time of 4 minutes, 54.38 seconds. The fast-charging Hurta was just a few strides behind at 4:54.98.

"I knew it was a pretty deep field," said Ellington, a fourth-place finisher at last year's meet. "I knew I wanted to sit in the top pack. I was really focusing on my third lap this year, not getting dropped and staying with the front and if I felt good I just went and kicked as hard as I could and today was enough. I was really excited."

With the cold conditions, the pace was relatively conservative. Olivia Sargent of Pennsbury, Pa., a runner-up at the Millrose Games Mile this past winter with a 4:51 to her credit, was the early leader, taking the pack through an opening 800m split of 2:27.

It was at that point that Ellington felt she had to go to work.

Finishing third in the race was Marissa Sheva of Pennridge, Pa., with a time of 4:58.10. New Jersey's Ciara Roche of Freehold Township was fourth at 4:58.10.

As for Ellington, she's focusing on the remainder of her final season, one that includes a date in the adidas Dream Mile in June. She earned that berth a few weeks ago by winning her specialty at the adidas Raleigh Relays in her home state.

But right now she's cherishing the gold watch she received for her latest victory.

"My senior year, to come back and win, it's just such an incredible experience," she said. "I still can't believe it." 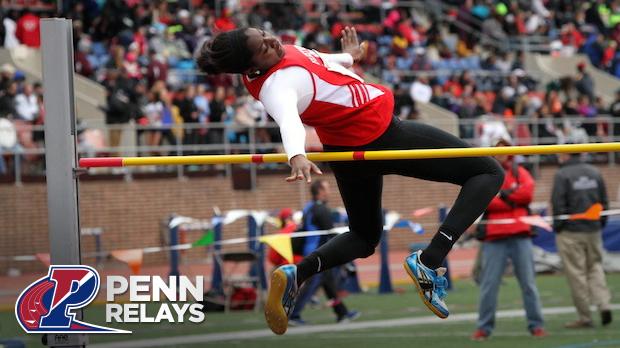 High-jumper Cyre Virgo was back in her element on Thursday.

The senior from Fleetwood Area, Pa., claimed her second title in the last three years at the Penn Relays Carnival, clearing an early-season best of 5 feet, 11.5 inches. It was familiar territory for Virgo, who was a runner-up in the 2014 event and won her first crown as a sophomore a year earlier.

"This feels just as amazing," said Virgo, referring to her inaugural win two years ago. "I am really proud to come out here my senior year and win first place again. I was a little under the weather the past week, so to come out and do this really means a lot to me."

The star leaper stated she wasn't affected by the often-windy and unfavorable conditions.

"I am pretty used to the cold weather because we got a lot this season. As far as the wind, I was also used to that," she said. "I just do what I usually do. This was my PR for this season so I'm happy I did it here."

Although Virgo had a solid year as a junior, it didn't quite match up to what she achieved as tenth-grader where she not only won at Penn, but captured an indoor national title and had her all-time best of 6-1.

The Texas Tech-bound athlete is hoping to return to her old form. Her latest effort certainly added to her confidence.

"I was really waiting for this moment. I am happy that I finally did it," she said. "It's just practice, determination and confidence and not letting things get into my head. I think those key factors are going to let me get to where I was before."

Jamaica's Sashane Hanson of Hebert Morrison was second overall at 5-7.25. Finishing third was another Pennsylvanian, Abby Jones of Franklin Area, also at 5-7.25. 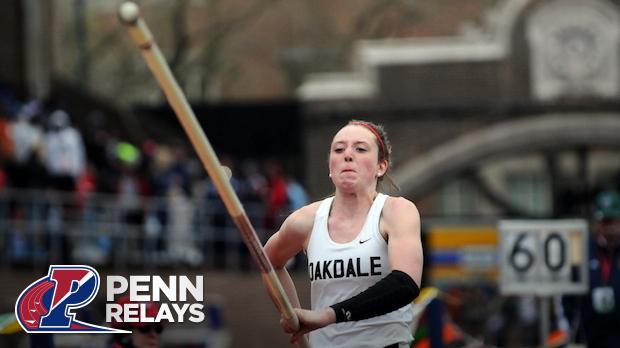 Jackie McNulty would rather forget her performance in the pole vault at last year's Penn Relays Carnival where she was far below her personal best.

"Last year I ran the 4x100 and then I had to go warm up and my coach had a family emergency so I was coach-less and took a bad warmup jump and fell in the box and severely bruised my toe," said the senior from Oakmont, Md., who finished tenth in 2014 at 11-1.75, more than 17 inches shy of her best at the time. "I think I made opening but that was about it. This year, my coach is here. I came off a big jump last week. I am a lot more confident in everything."

That confidence paid off in a big way Thursday afternoon as McNulty earned the coveted gold watch with a winning height of 12 feet, 3.5 inches. She won a tight contest, beating a pair of Pennsylvania vaulters, Megan Fry (State College) and Tesia Kempski (Bishop McDevitt), who finished second and third, also a 12-3.5.

McNulty was more than a foot from her PB of 13-3.25. Just five days ago, she captured the Zimmerman Invitational in her home state with a height of 13-1.

"I am pretty disappointed with the height, but it was all wind today. It wasn't ideal," she said. "I am very happy that I came back after a poor meet last year and to come back and win is great." 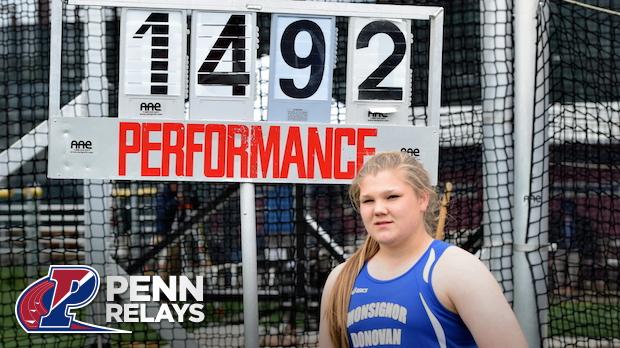 By the end of the season, Alyssa Wilson would like to throw the discus a distance of 155 feet, a mark that last year won the New Balance Nationals.

Judging by her progression lately, the sophomore from Donovan Catholic, N.J., might have a shot.

On her last throw of the finals at the Penn Relays Carnival early Thursday afternoon, Wilson achieved a four-foot personal best with a heave of 149 feet, 2 inches. With that effort, the soft-spoken tenth-grader placed third overall and as the first American.

Wilson was only five days removed from her previous best 145-1, which she did to win her specialty at the Big Blue Track & Field Classic on Staten Island, N.Y. Since late July, four of her last five efforts have exceeded 140 feet.

Her latest performance came under less-than-ideal conditions. It also propelled her past Virginia's Jada Taylor of Neptune, who placed fourth at 143-10.

“It was a really windy day," she said. “I had to relax and keep warm before every throw."

Jamaica's Paul-Ann Gayle of Edwin Allen captured the individual title with a best of 170-5. Fellow compatriot Shanice Love of Excelsior was second at 165-5. 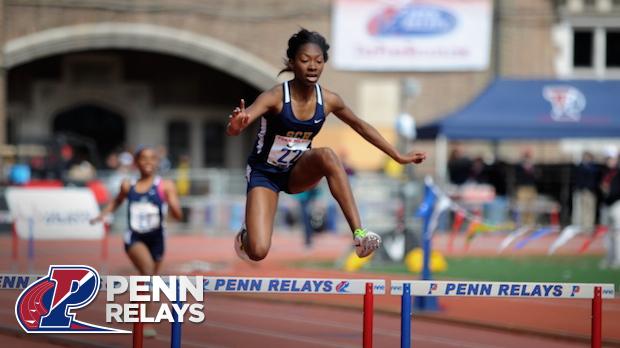 With a talented Jamaican contingent, Brooklynn Broadwater wasn't expecting to win the 400-meter hurdles at the Penn Relays Carnival. And when she put her spikes into the starting blocks for the third and final heat of the Championship of America event on Thursday morning, chances are neither did her competitors.

But with a strong start and nearly flawless over the hurdles, the junior from Springside Chestnut Hill Academy, Pa., was the first one across the line, finishing with a personal best of 1 minute, 0.69 seconds.

Broadwater's winning time is nearly three-seconds faster than her best of 1:02.96, a time she ran to win an AAU race the summer before her freshman year. She was hoping to run a PR inside Franklin Field, but a victory was not necessarily on her mind, considering her long layoff from the event and with some strong sub 60-second Jamaican hurdlers on the line.

“Honestly, I was just thinking about getting close to them," she said. “I didn't think I could win it. When I hear Jamaica, I just think fast."

Broadwater win out of the slow section is not the first time that she has pulled off a shocker. Back in early March, she captured the 200m dash at the PTFCA Indoor Championships from the unseeded heat. She was also the 400m state titlist.