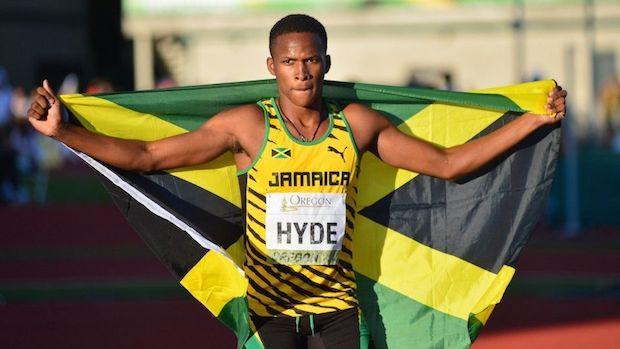 The road to a coveted Penn Relays victor's watch and/or penny just got a little bit easier for top American high school athletes.

"In a communiqué to ISSA, the PIAA today said that both athletes are deemed to have received benefits related to their athletic skills and performances which are not available to all students at their high schools. On this basis, both athletes cannot represent their respective schools at the 2015 Penn Relays."

O'Hara, who took third in the 200m at the IAAF World Junior Championships in a wind-assisted time of 20.31, signed on as a brand ambassador with LIME rival, Digicel.

Hyde is the defending Penn Relays champion in the 400-meter hurdles and owns a personal best of 49.01, set at the Jamaican High School Championships this year. He was heavily favored to defend his title.

O'Hara was the captain of the Calabar team that won their 4th straight ISAA Grace Kennedy Boys' Championship. He was the top leg on the team that blitzed a national record of 39.08 in the 4x100-meter relay. With O'Hara on the anchor, Calabar was heavily favored to sweep both sprint relays. However, the squad will remain favored in the 4x400-meter relay, as they set a national record of 3:06.76 without the star.