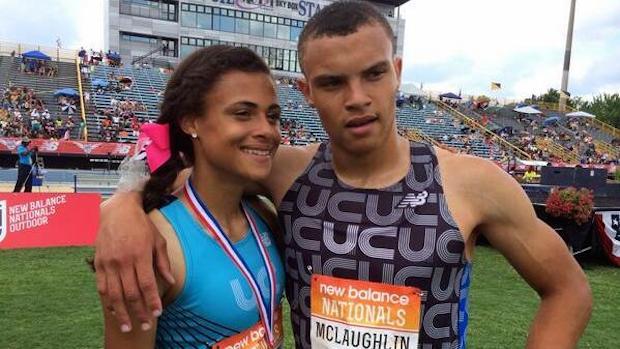 At this point, the McLaughlin siblings - senior Taylor and sophomore Sydney - are nationally recognized names in the prep track and field world.

Sydney is the defending New Balance Outdoor Nationals 400H champion and made headlines last spring in nearly winning the USATF Junior National Championship in the event as a freshman. Her brother, Taylor, is no slouch himself - the Michigan signee is a 400m All-American and multi-time New Balance Nationals champion on the Union Catholic sprint relays.

But part of being the best is bringing your 'A' game to every competition - which is exactly what the Union Catholic athletes did at their home Union County Championships at the Jersey City Armory on Sunday, January 25.

Sydney clocked 7.89 in the prelims of the 55-meter hurdles as the nation's third-fastest time this year. She came back in the finals to not only better the mark, but demolish it as she ran 7.80 to win the event and set a new US #1 mark. Teammate Alana Herran finished runner-up in 8.50.

She returned in the 400m, racing US #2 55.23 for the win. Haisha Bisiolu (Union HS) took runner-up honors in 57.88, which ranks within the top fifty times in the country this year.

McLaughlin also ran a strong anchor leg for the 4x400m relay to lead Union Catholic to the title in 3:30.3.