A couple of interesting situations occurred at the USATF Junior Nationals with either event champions or top 2 finishers with the IAAF World Junior qualifier standard not meeting the criteria to be selected by the USATF and/or eligible according to the IAAF to be on the US team for the upcoming World Junior Championships in Eugene. Top athletes who could have potentially contributed to the Team USA medal count, will not be competing in the World Junior Championships as confirmed with the USATF releasing the official team list today.

Here is our unofficial World Junior Championships "Snub Team" for the United States of those athletes who impressed with their performances at USATF Junior Nationals and seem deserving of being selected to World Juniors, but fell short of fulfilling all the criteria.

Nate Moore - Should have waited to jumped so far (Cali best ever) with less wind at his back. 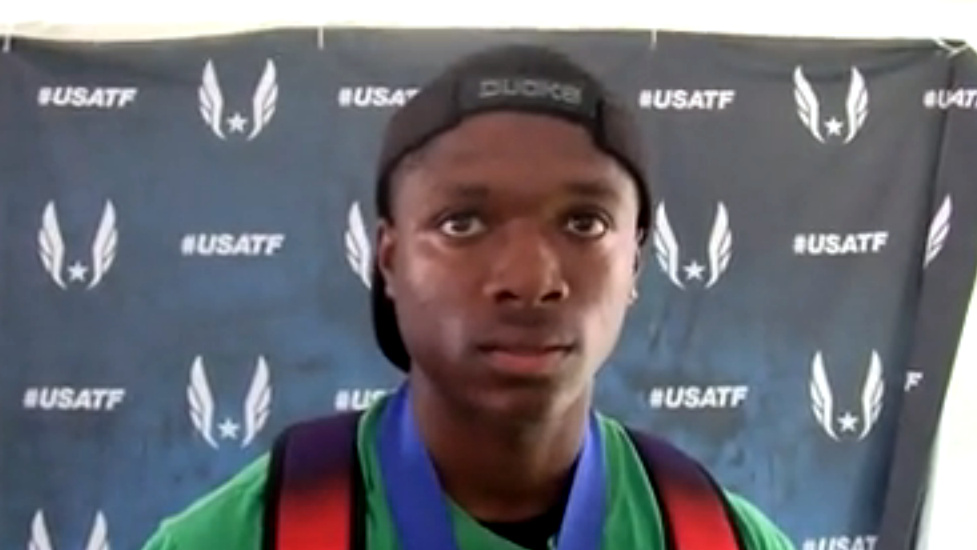 First case is Castro Valley High School's Nate Moore, who had the furthest all-conditions jump ever in the history of the great track state of California to win the junior men's triple jump on Saturday with a mark of 53'7". But since the mark was wind-aided and Moore did not have a wind legal mark this season over the IAAF qualifying standard of 51'4", he will not have the chance and opportunity to represent his country in two weeks at the University of Oregon recruit's future home track of Hayward Field.

However, two other jumpers who finished behind him in the competition and had wind-legal marks over the standard during the qualifying period of their seasons will be on the US team competing. Moore could have been a serious gold medal hope for the country and that would be a special moment if it came true for the future Duck. Instead, he will have to wait for future glory at Hayward and sit on his best high school mark ever in the last 10 years for a while. 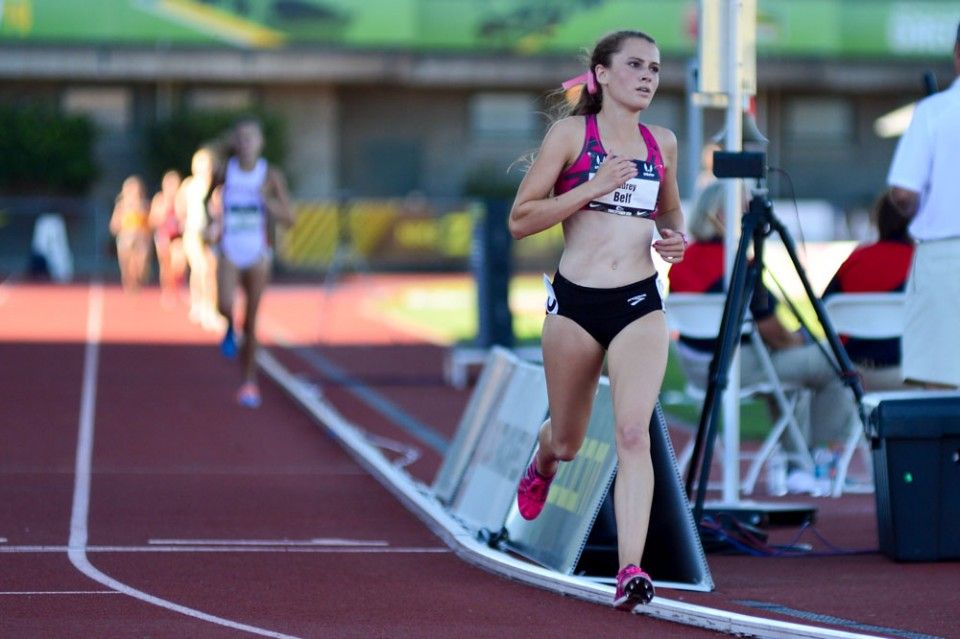 Then there is Audrey Belf, who obliterated the field in the women's 5K with a winning time of 17:01. A very humid and warm day for the final day of competition, it made for tough work and a virtually impossible task especially in a small field and not necessarily deep field of competitors for the rising senior at Birmingham Seaholm High School in Michigan to achieve the IAAF qualifying time of 16:40.

Nevermind that her 10:11 two mile performance at the Brooks PR Invitational probably equates to a 5K runner capable of running well into the mid 16's in the right race and conditions, but do not think anyone outside the United States even knows what a good two mile is with their affinity for metric distance races. Instead of racing for the United States in two weeks, she will be finishing up her break from racing and training and start preparing for her senior year of cross country.

There is some logic to why Moore or Belf did not make the team. Moore benefited from a great tail wind in his winning jump, while had not met the standard before when the wind was legal in any meets. Belf could have achieved the 5K standard elsewhere in a meet with better weather conditions if she really wanted to be on the team. But the next one is baffling. The reason: Being too good at too young of an age.

Sydney McLaughlin - Should have been born before 1998 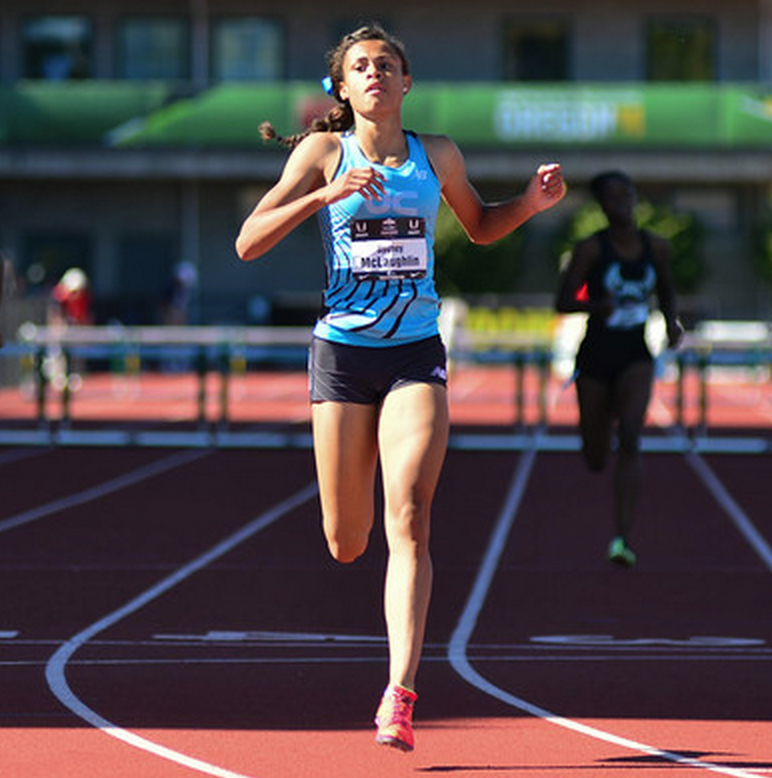 It makes sense to keep people too old out of the US junior meet and set a deadline for meeting that age limit. Older kids beating up on younger kids is just not fair. But punish a kid for being too young and beating up on the older kids? That's what is happening to Union Catholic's Sydney McLaughlin, who recently completed her remarkable freshmen year at the USATF Junior Nationals by challenging the NCAA 400 meter hurdles champ Shamier Little of Texas A&M all the way to the line. Forcing the collegiate's best to go deep into the well to squeak out a narrow victory, the end result for the 14 year old McLaughlin was a US #2 high school all-time performance of 55.63.

The time easily meets the IAAF World Junior qualifying standard of 60.75, but the New Balance Nationals and Jersey state hurdles champion McLaughlin is too young to be eligible for the team (yet still was eligible to compete essentially as a race bandit at the US Juniors). She will have to wait two more years when she is old enough to compete for a spot on a World Junior team, which will the championship meet will be held in Kazan, Russia. Very few Americans will see McLaughlin compete in at that World Junior Championships, while she could have dazzled thousands at Hayward Field in two weeks. 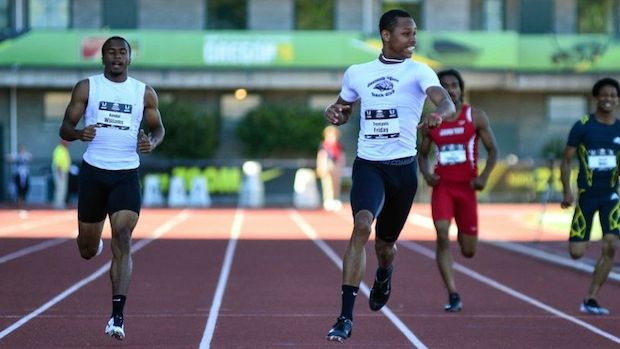 Another selection process snub, but to someone who eventually made the team in the 200 meter dash was 100 meter national record holder Trentavis Friday from Cherryville High School in North Carolina. After breaking the national record in the 100 meter dash in the prelims at US Juniors with his sensational 10.00 clocking, Friday unfortunately false started in the finals to lose his opportunity to compete in that specific event at the World Junior Championships.

He ultimately made the team in the 200 meter dash the next day with a 20.03 victory, but when the relay pool for the 4x100 meter relay was released today by the USATF, Friday's name was no where to be found. Why? He doesn't meet the rigid requirements of the relay pool which include the athlete must be among the top finishers in the finals of that event, so since Friday didn't actually finish much less start the finals of the 100 meter dash, the fastest ever prep in the event can't be featured on the relay with the other 3 top US juniors and see if they can challenge at World Junior record and go for gold. So instead the US will have leg that runs nearly 3 tenths of a second slower in the open 100 than Friday in his place. The Jamaicans are rejoicing.

Other high school athletes on this year's World Juniors Snub team include the following runner-up finishers from US Junior Nationals, who all were unable to meet the IAAF qualifying standards at the qualifier or previous meets during the qualifying window despite having strong second place performances this past weekend at Hayward Field.

All of this goes against what high school track is typically all about. You want to get the best of the best at your championship meets. You win, you move onto the next championship meet regardless of time or performance. A coach loads up and picks his best four legs for a relay when it matters the most. The freshmen and youth have just as equal right and opportunity to compete against and beat the older competition.

We want to continue to grow excitement and interest for our sport especially at this level to cultivate tomorrow's professional and elite stars. However, when some of our top high school stars are unable to be showcased at one of the biggest stages ever on American soil due to complex rules and qualifying criteria that over look being the US junior champion or one of the top ranked juniors in the World, the sport goes back to being viewed as backwards.

But this is actually good preparation and a valuable learning lesson for these athletes to get ready for future Olympic Trials and US Outdoor Championships when winning and top 3 finishes don't always matter at those championship qualifying meets.