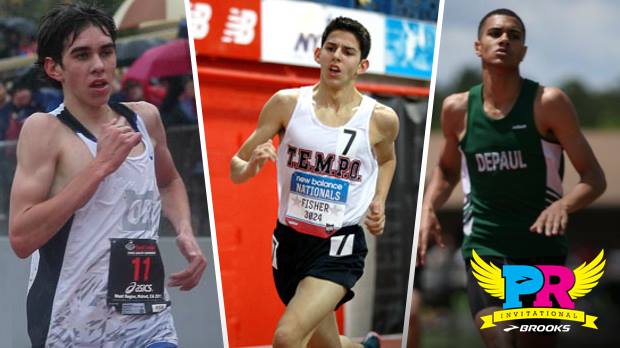 The following is a one-act play that may have, or may not have, occurred yesterday:
SCENE: One man sits alone on the newly renovated and covered Renton Memorial Stadium grandstand. The 6,500 seats are all but empty.
MAN. To truly be the fastest meet in all the land, Brooks Running would have to invite the fastest high school runners in the natio--
A WOMAN walks over to the lonely man, bends down, and begins whispering in the MAN’S ear.
MAN. Really?
The WOMAN continues to whisper. The MAN’S expression quickly changes from puzzled to persuaded.
MAN. ... really?
The WOMAN glares at the MAN and then walks away.
MAN. So, Brooks Running actually invited the fastest high school runners in the country to Brooks PR. It is truly the fastest meet in all the land. The truth lives. Run Happy.
SCENE
Below, we’ll quickly preview the distance events for the boys at the Brooks PR Invitational. If you can’t make it to Renton Memorial Stadium at 1:30pm Pacific Time on Saturday, June 21st, then be sure to watch online, right here on Flotrack.org (no subscription required).
Boys 800-meters - The Iron is Hot
One would think that having just run 1:49.36 for 800-meters would make you the top seed in the Boys 800-meters, but in reality, it gives you the number three seed. When did you get so quick, high schoolers?
Three of the top seven nationally ranked half milers, who all went sub-1:50 last week at New Balance Outdoor Nationals, lead this field of ten.
Kingwood High School junior Myles Marshall narrowly held off Lafayette High School senior Derek Holdsworth, 1:49.24 to 1:49.36, to finish third and fourth, respectively. It was a good, almost end to their seasons as both preps dropped their personal bests: Marshall chopped a significant chunk off from his 1:51.32 and Holdsworth’s previous best was 1:50.39.
But it was DePaul Catholic High School senior Joe White who boasts the fastest time of the field, who finished second in that heat in 1:48.75. That was White’s second time this season, nay, ever, that he’s broken the 1:50 barrier. Strike it while the iron is hot, they say.
If Holdsworth chooses to lead like he did last week (he split 53.25 for the opening 400-meters), then expect a battle to the end for all three preps.
But keep an eye on Cardinal Ritter High School’s Charles Jones. The senior ran 1:50.19 back in early May and has been undefeated since. He has a lifetime best of 1:49.78, which he ran two years ago at the AAU National Junior Olympics.
Boys Mile - Dream Mile, Redux
Of the 13 boys in the field, 11 have gone sub-4:10 this season. Of those 11, five of them just competed in the adidas Dream Mile. Of those five, three finished in the top five in in New York, New York. You can see where I'm going with this one.
We knew that Summit High School’s Matthew Maton was the real deal Holyfield, but his 4:03.23 second place finish last week swayed those that were on the fence, if there were any. Like a few other standout preps in the field, Maton possess a deadly combination of speed and strength, having run 1:52.89 for 800-meters and 8:18.66 for 3,000-meters; and that's not to mention his third finish finish at Foot Locker Nationals this fall. This junior will be looking for the win in Seattle, WA.
But while Maton’s eyes get wider as he gets closer to that golden shoe trophy, a few others are zeroed in on the target on his back.
Linn-Mar High School’s Josh Evans, who finished fourth at the adidas Dream Mile in 4:04.38, looks to inch a little closer to his younger competitor. We like a guy like Evans, who lead the field at both the 800-meter (2:02.17) and 1,200-meter (3:02.73) intervals in New York, NY. Some people just want to run fast and bring others along for the ride.
Villa Park High School’s Garrett Corcoran, who’s been mixing it up in the always tough California, finished right behind Evans in 4:05.19. Behind him was Greeneville High School’s Wesley Pectol in 4:05.25. Pectol opened his season with a 4:09.42 1,600-meter win at the FSU Relays, but now looks to emphatically close out his high school career with another fast mile.
O’Fallon High School’s Patrick Perrier is coming off a huge second place finish at the Nike Festival of Miles, where he finished runner-up in 4:06.70.
We’re also interested to see Idaho’s Elijah Armstrong. The junior has been unbeatable in the Gem State this year and is looking to cash in on some late season fitness following his 14:29.58 second place finish at the New Balance Outdoor Nationals 5K.
Mayfair High School’s Ellis Newton had a stellar showing at the CIF Southern Section Finals, taking the win in the 1,600-meters in 4:06.71.
The Washington guys Drew Schreiber (4:07.32 for 1,600-meters at the WA State Meet) and super sophomore Jack Yearian (4:08.50, also at the WA State Meet) will be in the mix as well.
We’ve also been told to watch out for Schreiber finishing kick, but he’ll have to be in the mix for it to count.
Boys Two Mile - History favors the Midwest, apparently
Between 1990 to 1999, only 17 high school boys broke 9:00 for the two mile. This weekend, all 13 guys in the field already have 8:5x.xx etched next his to name.
Three of the top six leading times in the nation will be in Seattle, WA, but there are a few others who are coming into fine form late in the season.
Gilbert High School’s US#2 Thomas Pollard leads the way with his 8:50.43 at the Iowa State Championships. Alex Lohr, who will be on the mic for Flotrack and is another fine product of the great state of Iowa, will not let us forget that Pollard has the top time in the field.
He also won’t stop mentioning that another Iowan, Boone High School’s Chandler Austin, is sitting at US#9 with his 8:51.74, which was also from the Iowa State Championships.
But, to Lohr’s astonishment, there’s more happening outside of Iowa.


While Lohr is talking a big game about his home state, Ryan Fenton enters the conversation to make a valid point about his state of birth, Maine. Ellsworth High School and top Mainer Dan Curts is at US#7, following his 8:51.24 win at the 47th Loucks Games back in early May. He’s ready for yet another big race.
Timberline High School’s Andrew Rafla, another incredible talent out of Idaho, sits at US#4 after his 8:50.55 second place finish at the Arcadia Invitational.
Then there’s the beast out of Colorado, Cerake Gebrerkidane, who finished third at the Arcadia Invitational 3,200-meters in 8:50.88.
US#12 Connor Mantz and US#15 Steven Fahy also both set personal bests at Arcadia, finishing in 8:52.90 and 8:53.95, respectively.
Since we’re giving everyone love, apparently, we cannot forget Kevin Selby’s home of De La Salle High School and Blair Hurlock. The senior has broken 9:00 twice this season with his personal best of 8:58.28 coming at, yes, you guessed it, the Arcadia Invitational.
Tennessee's Aaron Templeton looks to rebound from a disappointing 21st place finish at the New Balance Outdoor National 5K, Missouri’s Noah Kauppila just ran 4:10.46 for the mile and has gone sub-9 at Arcadia, and Washington’s John Dressel, yes, do you remember the junior who finished second at Foot Locker Nationals, always seems to have his eyes on the prize.
And last, but definitely not least, is Grand Blanc High School’s reigning Foot Locker National champion and adidas Dream Mile champion, Grant Fisher. When it’s mattered most this year, the junior has been absolutely unreal. He may have “only” run 8:55.75 this season, but like he said post-race following his 4:02.02 win, he didn’t have the fastest personal best of the field, but knew he’d challenge for the win.
The same goes for this weekend at Brooks PR.
Boys 4 x Mile
Everyone loves relays. Everyone. If you don’t, then you’re wrong. There, the truth lives.
That’s why Brooks PR added the always exhilarating 4 x Mile to this year’s program. The five-way team battle, which includes four teams from the Pacific Northwest and one special team from the other, more superior coast, is nothing short of national caliber.

Again, if you can't make it out to Renton Memorial Stadium to watch all of the action in person, be sure to watch it live right here on Flotrack.
Tweets by milesplit