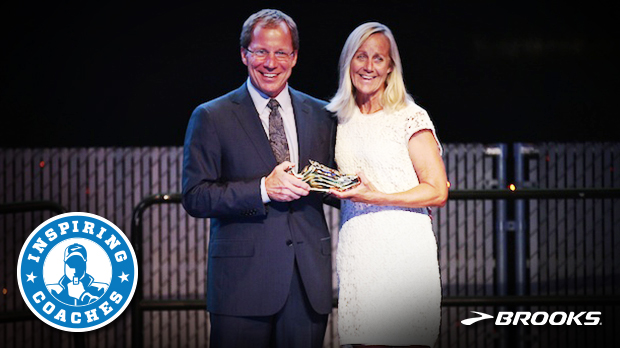 Seattle – Aug. 6, 2014 – Four decades ago, then-student Renee Williams-Smith was unsatisfied by the absence of a girls’ cross country program at Mira Costa High School in Manhattan Beach, Calif., so she stitched her own uniform to run with the boys.

Years later, Williams-Smith again blazed a trail for female runners in Southern California by returning to the school where she famously bucked convention and launching Mira Costa’s girls’ cross country program. Today, Brooks Running Company recognizes her work and dedication by crowning Williams-Smith the 2014 Inspiring Coach of the Year.

In addition to building a foundation for competitive running for females in Manhattan Beach, Williams-Smith is being honored for her inclusive coaching philosophy and her steadfast commitment to daring girls to strive for greatness. Williams-Smith works tirelessly to create an atmosphere where teammates become family and young athletes evolve into passionate lifelong runners, helping to attract new runners to the sport.

“Running is a sport of firsts. Whether it’s your first step out the door, signing up for your first race, crossing your first finish line or bringing home your first medal, achieving new things is in the DNA of our sport,” said Brooks Running CEO Jim Weber. “Renee’s track record of firsts in the running world, and her passion to create opportunities for all young athletes to experience success in cross country and track, inspired each one of us at Brooks.”

In honor of her 2014 Inspiring Coach of the Year Award, Brooks will give Williams-Smith and her Mira Costa Mustangs $10,000 in Brooks performance running gear and $2,500 cash to use for team expenses. Williams-Smith will also become a member of the Brooks Inspire Daily program comprised of coaches, elite runners and other running influencers. She’ll also get a trip for two to the 2015 Brooks PR Invitational, a national track meet that showcases the fastest high school running talent in the country.

“This award means the world to me,” said Williams-Smith. “Running makes me feel like the strongest version of myself and I’ve tried to inspire that feeling in young runners since I started coaching. Knowing that I’ve made a difference for the kids at Mira Costa feels absolutely incredible.”

Brooks chose Williams-Smith from a group of 25 finalists after current and former athletes, parents, fellow coaches, faculty and community members cast more than 45,000 votes via social media for the coach they found most inspiring. Each finalist received $5,000 in Brooks performance running gear and $500 cash for team expenses, as well as membership in Brooks' Inspire Daily program.

The Inspiring Coaches Award program was formed in 2011 in response to the floods of letters, phone calls, social media messages and in-person stories Brooks receives about the amazing things high school track and field and cross country coaches do for their kids, their schools and often their communities. The Inspiring Coaches program aims to honor those, like Williams-Smith, who give their time, personal dollars and heart to their teams every day. Past recipients of the Brooks Inspiring Coach of the Year Award include 2013 Winner Justin Torres, 2012 Winner Paul Raley and 2011 Winner Amy Pitzel.