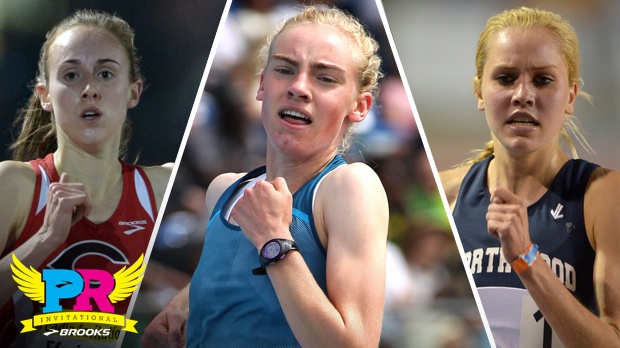 Below, we’ll preview the three girls distance events at the Brooks PR Invitational. If you can’t make it out to Renton Memorial Stadium at 1:30pm Pacific Time on Saturday, June 21st, then you better be watching online here on Flotrack.org (no subscription required).
Girls 800-meters
After watching the adidas Grand Prix Women’s 1,500-meters, I was prepared to make some sort of promise that Camas High School junior Alexa Efraimson would never, ever, again lose to another high school athlete.
But someone in our office, who will remain anonymous due to potential embarrassment, thinks that Kinkaid High School’s Raevyn Rogers has a shot to takedown the junior phenom before the season’s end.
Rogers is coming off a season’s best of 2:04.88 from her win at New Balance Outdoor Nationals and boasts a personal best of 2:03.32, which came last summer from her bronze medal finish at the IAAF World Youth Championships.
This is not an insult to Rodgers, who, if she was running at the Dempsey Indoor Facility, would easily be able to break Hannah Meier’s 2:07.45 meet record. But she’s going up against one of the best female preps of all-time. That just ain’t fair.
It’s not all just about these two, though. Central Kitsap High School junior Rose Christen just ran a season’s best of 2:05.64 at the Washington State Meet; Coe Brown Academy junior Hannah Parkerfinished second last week at NBON in 2:06.85 and will be looking to challenge her 2:06.42 lifetime best; and Highland High junior Lauren Ellsworth, who ran 2:07.61 back in early May.
Grosse Pointe South junior Ersula Farrow, who was also at the IAAF World Youth Championships last summer, is coming off a fifth place finish at New Balance Outdoor Nationals in 2:07.22.
Don’t forget about the Canadian sensation Kailee Saywer, who ran 2:07.78 two weeks ago at the OFSAA (Ontario Federation of School Athletic Association) Championships.
Another Iowan (thanks, Alex Lohr) Pleasant Valley junior Kaley Ciluffo has run 2:08.56 this season and Washington’s Alexis Daugherty (2:09.81) round out the field.
Girls Mile
Since we’re advocates of striking the iron while it’s hot, not literally of course, we can’t and won’t bet against adidas Dream Mile champion Sarah Feeny. The Ogden High School senior blitzed her last lap at Icahn Stadium in 67-seconds. If that’s not enough for you, how about the fact that Feeny lead from about 600-meter out? Baller, indeed.

Behind her are ten other girls, mainly from California, who will be looking to end Feeny’s hot-streak.
We saw San Lorenzo Valley senior Anna Maxwell pull away to run 4:41.63 at the Stanford Invitational earlier this season, which now sits at US#4. Gunn High School’s Sarah Robinson, who outkicked Maxwell the day before in the Girls DMR, has run 4:44.07 this season as well. Right behind her on the national list is Great Oak High School’s Haley Dorris, who would have punched her ticket with her 4:44.60 win at the California Southern Section, if she had not already won the Brooks Mt. SAC Mile and gained automatic entry to Brooks PR.
La Costa Canyon’s Emma Abrahamson, who just set a personal best of 4:50.02 at the California San Diego Section, rounds out the Californians in the field.

Now for the rest of the country.
Northville High School’s Rachel Coleman finished runner-up last week at the New Balance Outdoor National Mile in 4:47.05, Kamiakin High School’s Megan Beauchene just took the win at the Washington State 1,600-meters in 4:48.42, and Air Academy High School’s Katie Rainsberger, who was second at the Brooks Mt. SAC Mile 4:54.30, boasts a seasonal and personal best of 4:48.84. She hasn’t raced since mid-May and could be a threat coming down from the 6,000 foot elevation of Colorado Springs, CO.
Classical High School’s Maddy Berkson ran 4:26.88 two weeks ago at the Rhode Island State 1,500-meters Championship. That converts to roughly 4:48.59 for the mile, according to our handy, dandy conversion calculator.
The real threat could come from University High Amelia Paladino, who ran 4:43.69 for the mile at New Balance Indoor Nationals this winter. She may not have had a spectacular New Balance Outdoor performance, finishing ninth in 4:54.81, but she was our Penn Relays Mile in 4:45.34. She’s also from West Virginia and my former roommate, who was a fine product of West Virginia as well, would not be happy to see a lack of love for the Mountain State.
Smithson Valley High School’s Devin Clark, who ran 4:46.94 back in April, rounds out the field.
Girls Two Mile
If I were to tell you that the slowest seed in the Girls Two Mile was roughly 10:27, would you believe me? Well, you should.
Northwood High School and US#1 Bethan Knights is the girl to beat. Just a few weeks ago at the California Southern Section, Knights crushed a 9:54.89 to take the win and rise in the history books to number five all-time. That’s, like, really, really good.
While Knights it the clear favorite, we feel the need to give a little something something to the rest of the field.
Staples High School super sophomore Hannah Debalsi just ran a ridiculous 10:09.08 for two miles to take the win at New Balance Outdoor Nationals.That currently sits at US#6. She also won this year’s Penn Relays 3,000-meters in 9:34.57.
Not too far down the list is Shaler Area junior Brianna Schwartz, who ran 10:10.03 for 3,200-meters back in May. Schwartz was also seventh at the adidas Dream Mile in 4:50.16.

We’ve also seen and heard a lot about future Tar Heel Caroline Alcorta this year. The West Springfield senior ran 10:12.57 back in May at the Loucks Games, but it’s her performances on the big stage that’s impressed us most. Back in the fall, Alcorta was third at Foot Locker Nationals. This winter, she became the Millrose Games mile champion in 4:46.06. A win at Brooks PR could be her spring recital.
While her teammate will be in the mile, Destiny Collins will be Great Oak’s representative in the 2-mile. She’s run 10:14.33, which came at the California Southern Section.
Birmingham Seaholm’s Audrey Belf, who flew a bit under the radar at the adidas Dream Mile, where she finished fifth in 4:45.37, has run 10:16.06 this season.
Bigfork High School junior Makena Morley was seventh at the Arcadia Invitational in 10:16.38 and, most recently, just ran 16:49.74 for 5,000-meters at NBON.
Arlington High School junior Bella Burda has run 9:46.23 for 3,000-meters this year, but has a personal best of 9:33.90. Grant High School super sophomore Ella Donaghu ran 9:24.86 for 3K back in early May and has been fairly quiet since. Senior Hannah Christen of the legendary Lake Braddock High School down in Virginia, was second to Debalsi at the Penn Relays 3,000-meters in 9:37.57.
Linn-Mar sophomore Stephanie Jenks, who finished runner-up at the adidas Dream Mile in 4:42.68, steps back up to the two miles this weekend. She ran a personal best in the 3,000-meters of 9:24.67 last month at the Iowa State Championships.
Dos Pueblos High School senior Addi Zerrenner, who was third at the California State Championship in 10:13.12, rounds out our field.
Tweets by milesplit