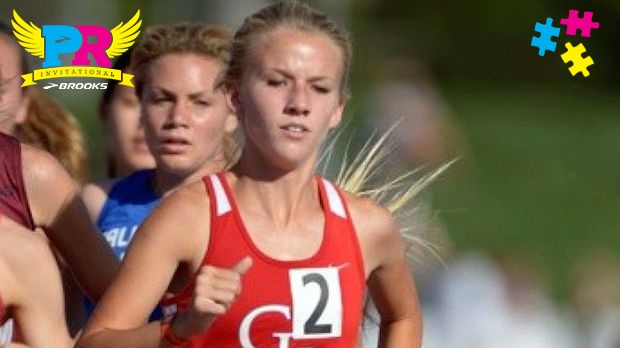 Haley Dorris is one of three sub 4:50 milers on the Great Oak girls track team. She and teammate Destiny Collins will be making the trip to Seattle this weekend to compete in the Brooks PR Invitational with Dorris jumping in the mile and Collins in the two mile.  Dorris earned her spot to Brooks PR automatically back in late March taking the mile at the Azusa Meet of Champions with a 4:52 win, but has since improved that time dropping down to a 4:44 1600 in CIF Southern Section Masters meet last month.
When did you first learn that you were invited to the Brooks PR Invite and how did your react?
I first learned I was invited the week of our State meet and I think I actually screamed after my coach texted me. I was invited at the same time as my teammate Destiny so we were both fangirling pretty hard for the rest of the night.
What does it mean to you to be invited to the Brooks PR Invitational?
It really means a lot to be considered one of the best in the country and to have the opportunity to compete against so many elite and talented runners. It's also the absolute best way to be ending my high school running career!
What do you hope to achieve at the meet?
My goal is to compete and to finish the race feeling like I gave everything I had.

What music do you listen to before races?

I usually don't listen to music before because it's more relaxing for me to laugh off the nerves with my teammates.
If you were stranded on an island with three things what would they be?
Costco muffins, Netflix, and a knife.
What would you consider as your best or most favorite race of all-time and why?
My favorite race was at CIF Masters a few weeks ago because we became the first team in national history to have 3 girls go sub-4:50 in the 1600 and it was a 24 second PR from my junior year.
What are some things un-running related people might not know about you?
I was an Irish dancer for 5 years and competed in the World Championships in Scotland before I started running. I'm also borderline addicted to salt.
How and why did you get involved in the sport?
I got involved in the sport thanks to my coach's persistent recruiting skills, despite my initial plans to join the tennis team at my school and continue dancing.
How has your training been leading up to the meet?
My training has been pretty light since our State meet but it's going very well!
What are you most looking forward about your trip, race and weekend at the Brooks PR Invitational in Seattle?
I'm most looking forward to competing in such a loaded field and hopefully finishing my season on a high note. I also love meets like these because it's so fun getting to know other runners from all over the country.

Watch Haley and the rest of the Brooks PR "puzzle pieces" race on June 21st on Flotrack and MileSplit!