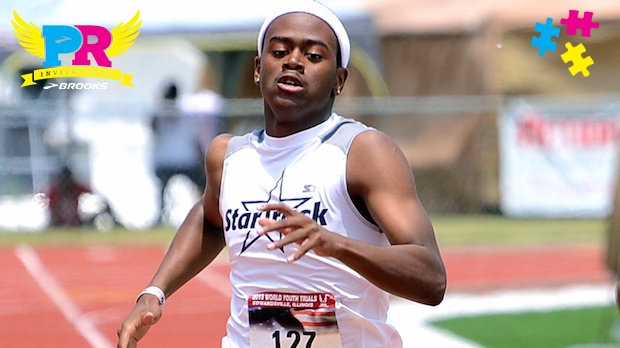 Another piece to the Brooks PR puzzle is Banneker High School quarter-miler Ryan Clark. Clark, was second at the Georgia Olympics this year. In 2013, he was the 400 meter champion at the Georgia Olympics and a member of team USA at the IAAF World Youth championships where he earned a silver medal. A standout 200 meter runner as well having already broken 21 seconds. He will compete in the 400 and brings with him a personal best of 46.33 to the Brooks PR Invitational on Saturday, June 21st in Seattle.
When did you first learn that you were invited to the Brooks PR Invite and how did your react?
Clark: I first learned about the Brooks Invite when I received the invite in May at school. When my  coach handed me the package, I already knew it was the invite. I was really excited when I saw it.
What does it mean to you to be invited to the Brooks PR Invitational?
Clark: To be invited to Brooks PR means a lot to me because I was one of the few chosen out of the whole nation to run.
What do you hope to achieve at the meet?
Clark: At this meet I hope to run close to my PR or faster than my PR.
What music do you listen to before races?
Clark: I usually listen to a little rap just to get me focused and hyped before a race.
If you were stranded on an island with three things what would they be?
Clark: If I was stranded on an island, I would need my phone with some connection, food, and a water bottle.
What would you consider as your best or most favorite race of all-time and why?
Clark: My favorite/best race would be the 400m I ran at the IAAF World Youth Championship in Ukraine. To represent the USA is a huge honor and to actually get 2nd in the world is amazing.
What are some things un-running related people might not know about you?
Clark: I play a little basketball and I’m a chill person.
How and why did you get involved in the sport?
Clark: I got involved in track because my dad ran track in high school and college, so he wanted to know what I can do.
How has your training been leading up to the meet?
Clark: Training has been going well. I’m finally getting my groin back healthy for the meet. I’ve been doing workouts to prepare me for the 400m.
What are you most looking forward about your trip, race and weekend at the Brooks PR Invitational in Seattle?
Clark: This week I want to have fun, compete with the best, and hopefully win. I also would like to be healthy before and after the race.

Watch Sukhi and the rest of the Brooks PR "puzzle pieces" race on June 21st on Flotrack and MileSplit!