Recap of the championship girls distance races from the 2014 New Balance Nationals Outdoor. 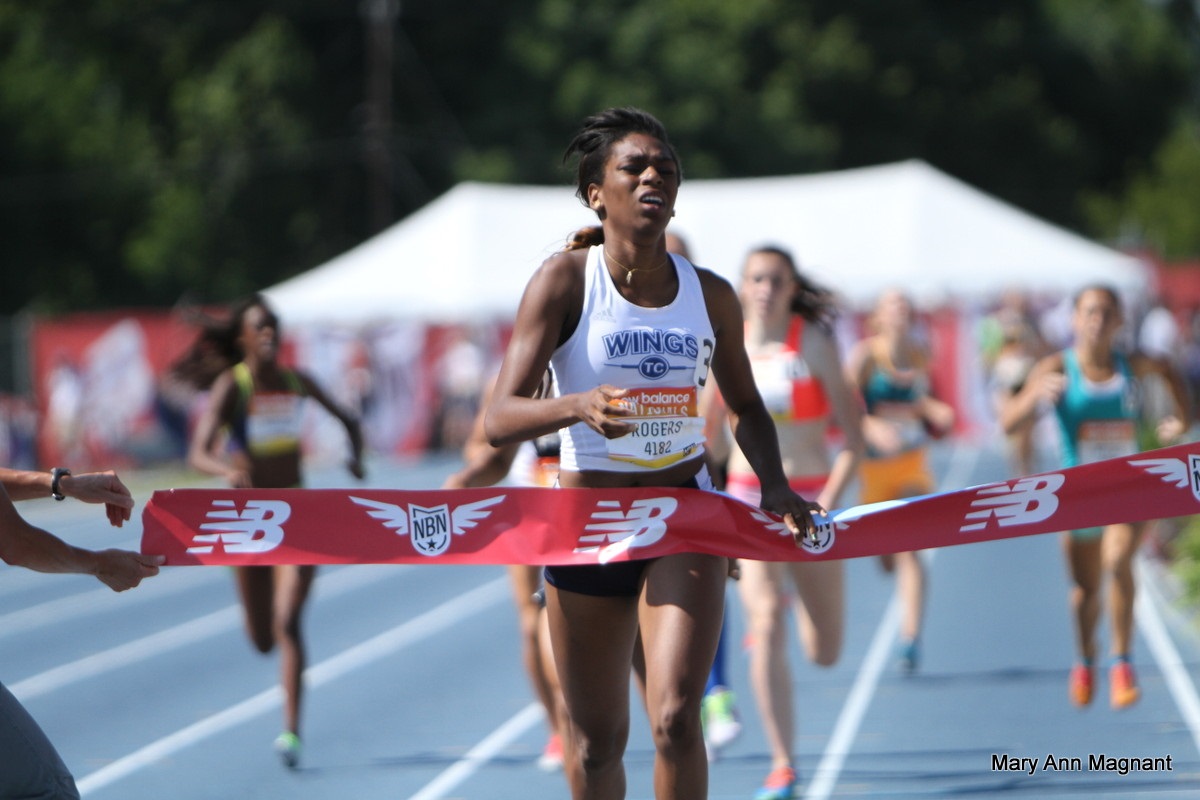 With all the attention on Olivia Baker entering the girls 800 final as the Columbia (NJ) track star had dazzled fans with her 2:02 split at the Penn Relays in the Championships 4x800 meter relay, Raevyn Rogers from Kinkaid School in Houston, Texas had to remind everyone why she was the defending national champion in the event and a World Youth bronze medalist from 2013.

She took the field out in 60 seconds for the first 400 meters, while Baker lingered back in the pack. Coming off the final turn, Baker had moved herself up into second place position to chase after Rogers, but Rogers did not let her form break down on her and instead powered her way to a second straight New Balance Nationals outdoor 800 meter time with a US #4 performance of 2:04.88. Rogers is out to prove that she is best prep miler in the country this summer as she will race next weekend at the Brooks PR Invitational against the likes of Alexa Efraimson. 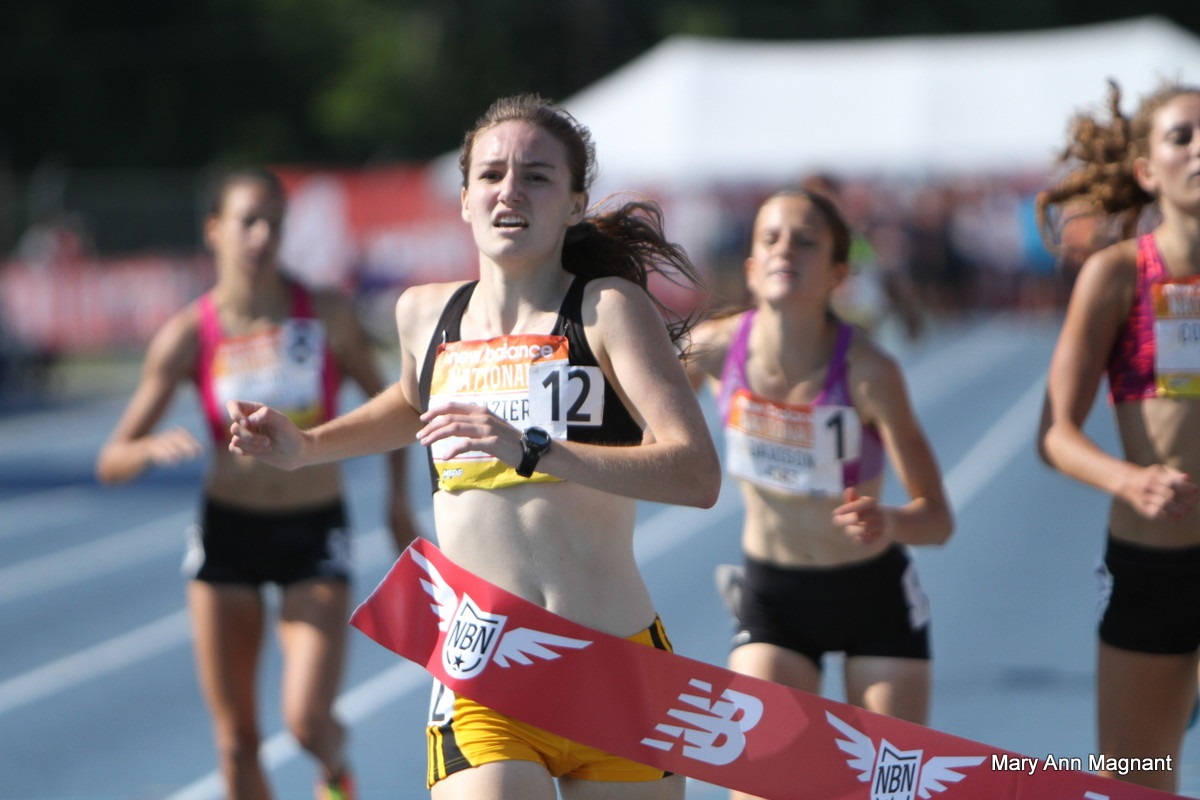 For most distance runners, the last race of a triple is usually not their best. They should be fatigued and wore down from their previous two races. Especially if their previous two races add up to 5.1 miles like was the case for Ryen Frazier of Ravenscroft School in North Carolina. The junior Frazier comes from a family no stranger to pulling off incredible sisters at national meets as her big sister Wesley Frazier was able to win national titles in the 5K, 2 mile, and mile last year.

Wesley had wins to carry momentum into her next victory. Meanwhile, Ryen had disappointment especially after blowing up in the 5K on Friday night trying to challenge 2012 Foot Locker Nationals champ and eventual 5K winner Anna Rohrer of Indiana. Ryen's second race of the meet was a bit more redeeming and up to par in grabbing All-American honors in the two mile on Saturday with a fourth place PR finish of 10:25.

Few could have expected to her to have the legs in her to put together the race that she ran on Sunday in the championship girls mile. Tiana Guevera from Miller Place in New York led the field quickly on her own out front for the first two laps before Josette Norris of New Jersey then Rachel Coleman from Michigan seized the lead. Coming off the final turn, several girls were in position to surge to victory, but Frazier ended up having the greatest will to win to pull away for a remarkable victory in a new personal best drop of four seconds with her time of 4:46.39.

The Michigan Division 1 state champ Rachel Coleman ended up second in 4:47.05 after making a move for the win in the final 200, while Pennsylvania state runner-up Madeleine Davison will be one of the top returnees for next year's race as the North Alleghany sophomore claimed third place in 4:47.07.

​The next challenge for Ryen Frazier? Can she come back next year and win all 3 national titles in the 5K, two mile, and mile like big sister Wesley in 2013? She definitely plans on racing all three again. 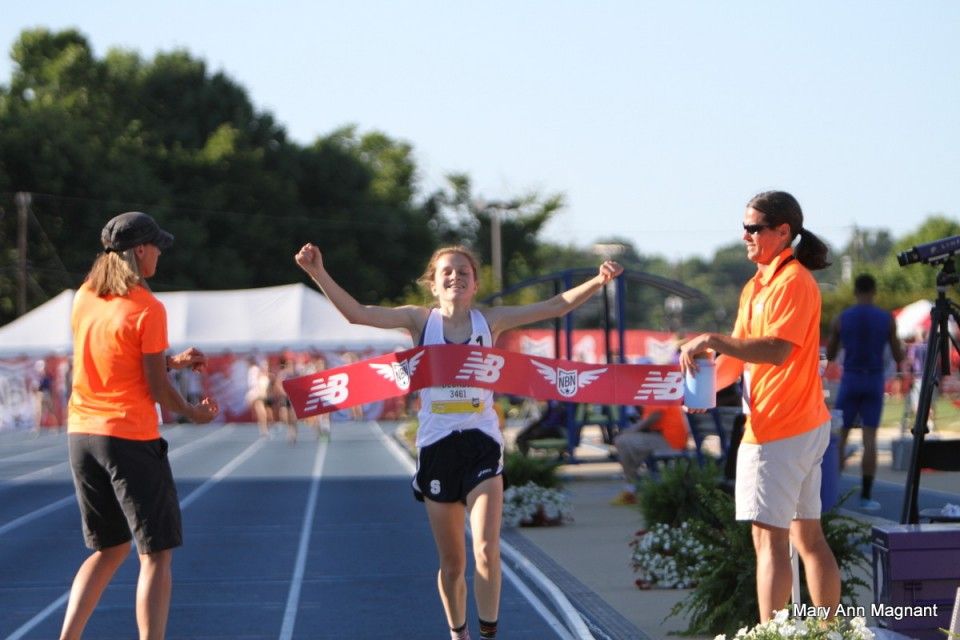 The North Carolina heat and humidity was quite brutal for the two milers on Saturday evening that only the strongest would be able to survive. It turned out that Staples (CT) sophomore Hannah Debalsi was the strongest. After suffering disappointment twice in national championships late in races in both cross country at Foot Locker Nationals being outkicked by Tessa Barrett from Pennsylvania for the national title and then in indoors battling with Barrett again at the end, but tripping and falling down in the final lap of he two mile, Debalsi was not to be denied victory this time around.

The Connecticut state champion Debalsi shot to the lead from the gun and only Alaska's best in Arcadia Invitational 3200 runner-up Allie Ostrander of Kenai Central was willing to give chase. By the final 800 meters, Debalsi was able to shake Ostrander and open up a lead that no one with a great kick would be even in range to use it against her as she crossed the line in a time of 10:09.08 and 13 seconds ahead of the next finisher. Considering how many of the runners' times in the field suffered in the conditions, it makes one wonder how fast that Debalsi could have run in more ideal weather as well as competition to race against on those final two laps. A possible sub 10 in her?

The junior Ostrander struggled to finish coming from a much different climate back home in Alaska and ended up finishing 5th in 10:28, while Montana state champ Makenna Morley earned her second All-American honor of the weekend in Greensboro as she came on strong in the final 200 meters to end up national runner-up in the two mile at 10:22.17. 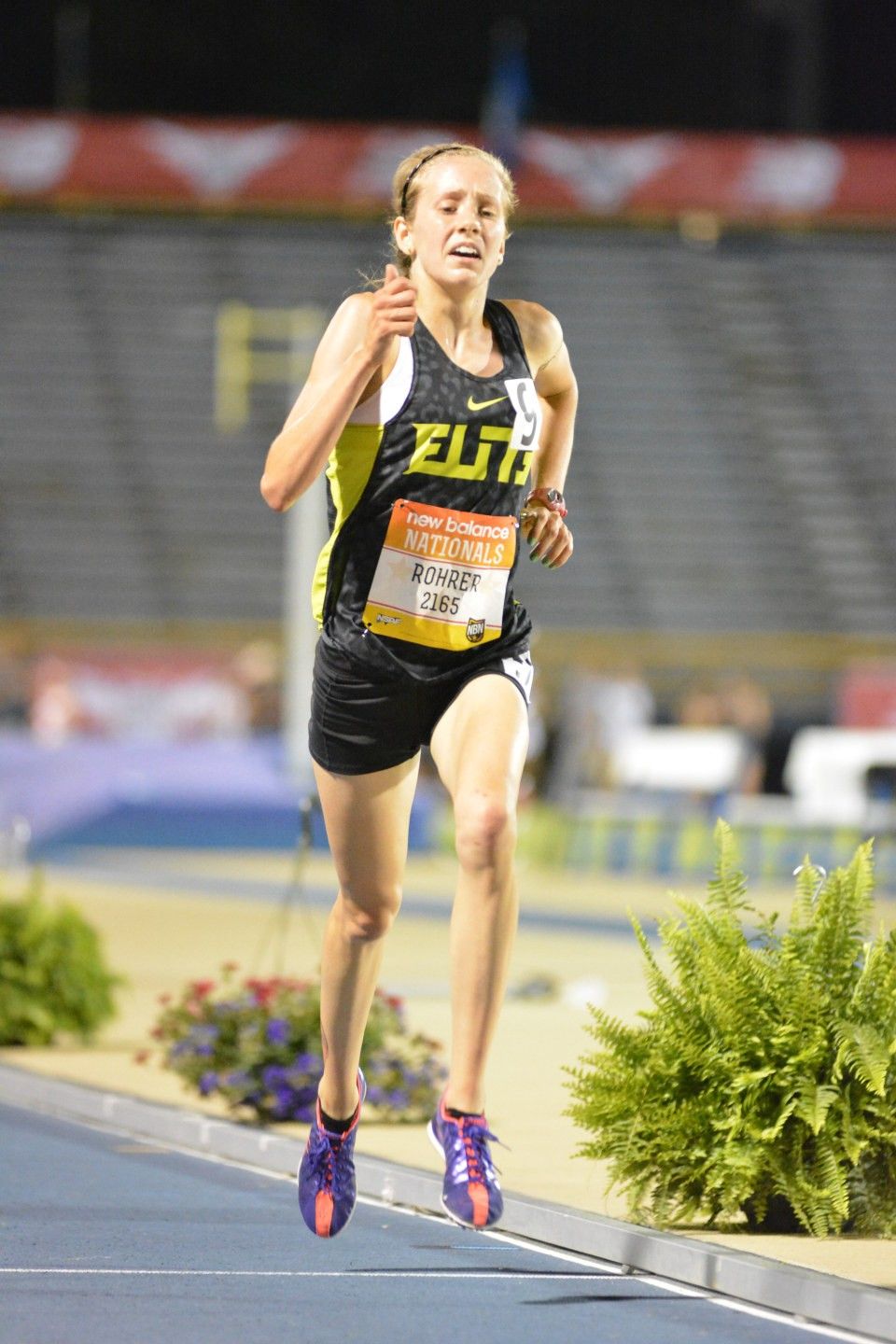 Welcome back Anna Rohrer to the national stage. The 2012 Foot Locker Nationals champ who missed virtually the entire cross country and indoor season this past year before resuming normal training again in April, the Indiana high school junior distance runner Rohrer looked even fitter than when she won at Balboa Park in San Diego two Decembers ago as she pulled away from a strong field in the girls 5K on day one of the New Balance Nationals in a new personal best and US #1 time of 16:16.97. She dominated the field in winning by a margin of nearly a full 30 seconds.

She was challenged through the first two miles by Ryen Frazier, who was attempting to follow in the footsteps of her sister and last year's 5K champion Wesley Frazier, but Rohrer's pace was too hot for the native of North Carolina to handle as she ended up falling back out of the top 6 All-American places. Roher should have a lot confidence building into cross country season following her 5K track performance at New Balance Nationals to look to her as a much stronger pre-season favorite to compete and go after her second Foot Locker Nationals title next December.

Previous US leader Claire Howlett was in the mix for the first half of the race, but then tripped and nearly fell to the track and that seemed to throw her off for the rest of the race and not be able to catch up to Rohrer. Howlett still finished a respectable third place time of 16:46 in the humid conditions as she was edged out for second place by Texas state champion Natalie Rathjen (2nd, 16:46.24), who certainly was much more acclimated to race well in humid weather. 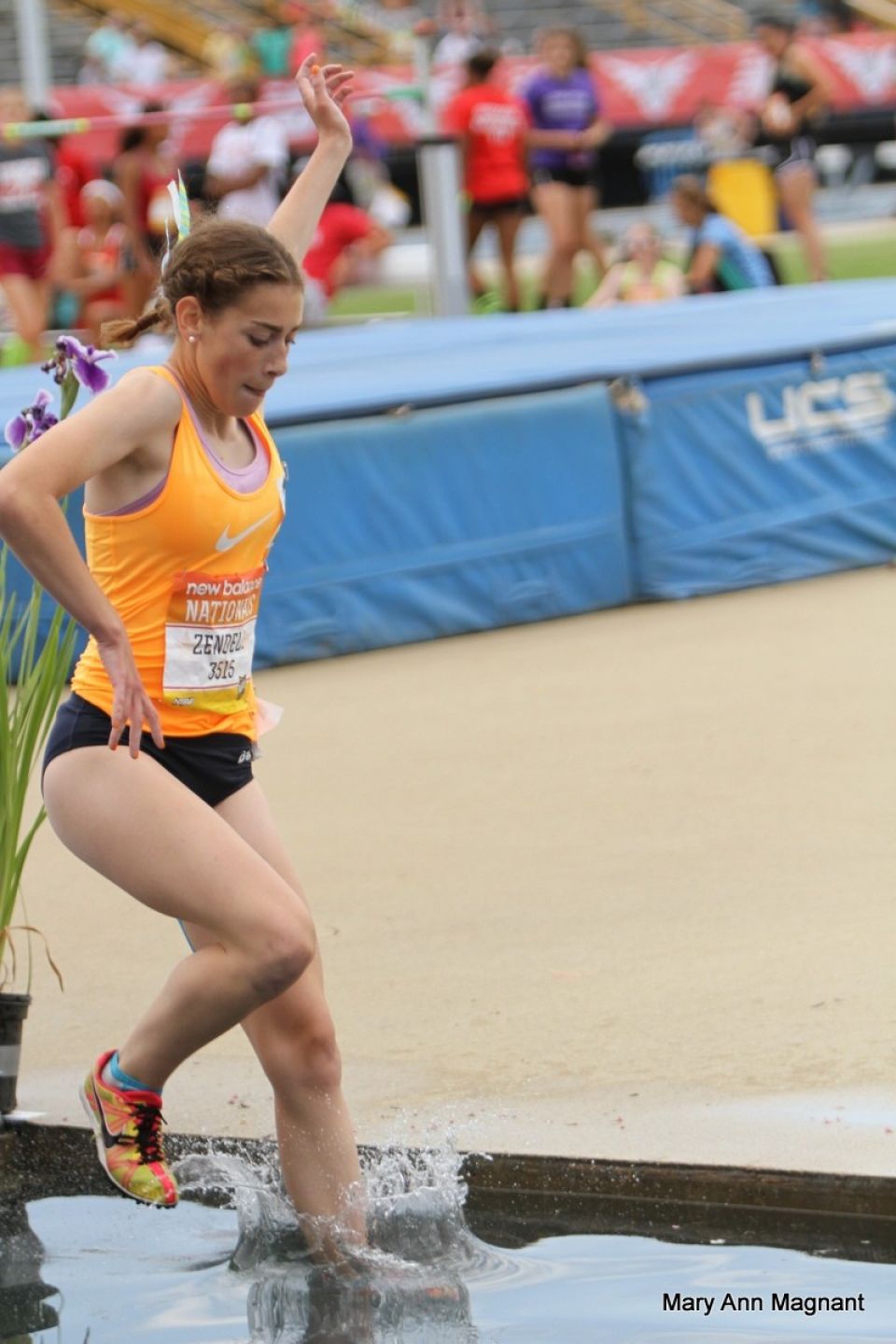 Basically the New Balance Nationals simply brought down the field for the New York State Championships from a week ago down to Greensboro for girls 2000 meter steeplechase. Even the annoucer Ian Brooks had to just say if the state is not mentioned when calling out the field, just assume they are from New York. The US leader and New York state champion Kelly Hayes of Pearl Hayes was having an off day clearly as noticed by a few laps into the race laboring to stay up with the leaders, so the door was opened for one of her regular steeple rivals from her homestate to step up and become a champion on this day.

The two New York steeplers who seemed wired in for the steeplechase race at nationals were Suffern junior Kate Zendell and North Bablyon senior Jessica Scheriff. The two established themselves by lap two as the pace setters and by the last few laps had put some distance between themselves and the chase pack. Zendell started to gap Sheriff a little bit more before the final lap and final water jump, but Scheriff then made things more interesting coming down the final straightaway to close the distance on Zendell and give hope for a come from behind victory.

However, Zendell could sense Sheriff was coming for her and she found enough energy to push it in strong enough to claim the win and New Balance Nationals title in the steeplechase with a time only a mere hundredth of a second off her personal best at 6:51.89 to go from third in her state meet to first in the national meet.

More recaps and stories to come from the 2014 New Balance Nationals!