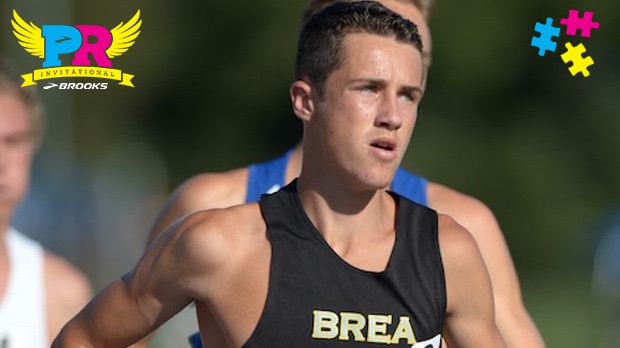 Another piece to the Brooks PR puzzle is Brea Olinda High School sophomore distance runner Austin Tamagno. Tamagno was the runner-up in the 1600 meters at the CIF Track & Field State Championships and was third in the 3200 meter run. During the cross country season, he was a Nike Nationals finalist, placing 19th against some of the nation's best. He will compete in the mile and brings with him a personal best of 4:06.93 for 1600 meters to the Brooks PR Invitational on Saturday, June 21st in Seattle.
When did you first learn that you were invited to the Brooks PR Invite and how did your react?
Tamagno: I received my golden ticket in January. I was really excited and posted the puzzle on Twitter.
What does it mean to you to be invited to the Brooks PR Invitational?
Tamagno: I was honored to be invited to one of the most prestigious races in the country.
What do you hope to achieve at the meet?
Tamagno: I hope meet new people and run a PR!
What music do you listen to before races?
Tamagno: I listen to rap before my races.
If you were stranded on an island with three things what would they be?
Tamagno: If I was stranded on an island I would want my Bible, water, and clothes.
What would you consider as your best or most favorite race of all-time and why?
Tamagno: Winning the Mt. SAC Invitational was my most memorable race because I ran the 13th fastest all-time mark on the course and I was only a sophomore.
What are some things un-running related people might not know about you?
Tamagno: I don't enjoy pizza.
How and why did you get involved in the sport?
Tamagno: My basketball coach introduced me to track when I was in fifth grade because he discovered I was fast.
How has your training been leading up to the meet?
Tamagno: I trained very hard up to my state meet June 6-7 where I doubled 1600/3200. Now I am fine tuning and reducing my mileage as I prepare for Brooks since I will be running only the 1600.
What are you most looking forward about your trip, race and weekend at the Brooks PR Invitational in Seattle?
Tamagno: I am looking forward to meeting and talking to the professional athletes and having fun with the other athletes who have been invited.

Watch Austin and the rest of the Brooks PR "puzzle pieces" race on June 21st on Flotrack and MileSplit!