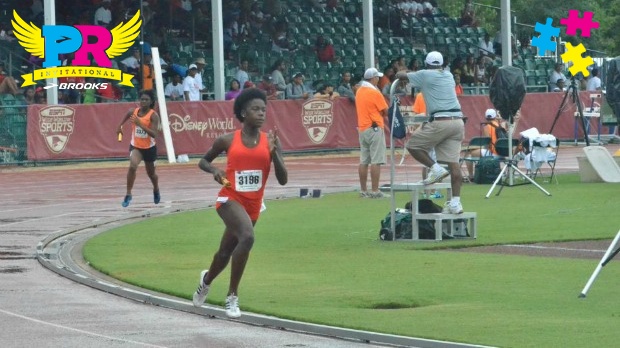 Parrish: I first learned I was invited to Brooks PR during our senior spirit week at school and I remember telling my friends how devastated I was because I did not get an invitation.  When we arrived back on campus from lunch, my athletic director was standing outside her office saying "Deja you have a package" and I knew it was from Brooks. The joy I had was indescribable. I ran all around our parking lot dressed as a grandmother because it was senior citizen day. I was so excited.
What does it mean to you to be invited to the Brooks PR Invitational?
Parrish: It means a great deal to me because even though I did not do well this season it gives me hope that great things are still to come and that God is just starting to really open up doors for me. It helped me keep the faith in a desperate time of need for me.
What do you hope to achieve at the meet?
Parrish: I hope to run faster then I did my senior year. I just want to do my absolute best and strive for greatness. I don't have a specific time, I just want to be happy with myself because I'm my biggest critic.
What music do you listen to before races?
Parrish: I listen to One Republic before my race.

If you were stranded on an island with three things what would they be?
Parrish: If I was stranded on an island with three things they would be a generator, my phone, and a charger.
What would you consider as your best or most favorite race of all-time and why?
Parrish: Last year's Brooks PR Invitational would be considered my favorite race of all time because I ran free. I was proud of myself even though I did not win. I remember the atmosphere being so energetic. For once, I did not over think my race.
What are some things un-running related people might not know about you?
Parrish: Something's that un running related people might not know about me is that I love to read.
How and why did you get involved in the sport?
Parrish: My mom was a track runner so I wanted to follow her footsteps and be as great as she was. Though I didn't know that at a young age. Before I realize that, she kind of forced me, but it;s cool because I don't see myself doing anything else.
How has your training been leading up to the meet?
Parrish: My training as been great. I've implemented more speed work in my workouts which I was lacking during the season.
What are you most looking forward about your trip, race, and weekend at the Brooks PR Invitational in Seattle?
Parrish: I'm looking forward to making friends and enjoying my 2nd favorite city.

Watch Deja and the rest of the Brooks PR "puzzle pieces" race on June 21st on Flotrack and MileSplit!