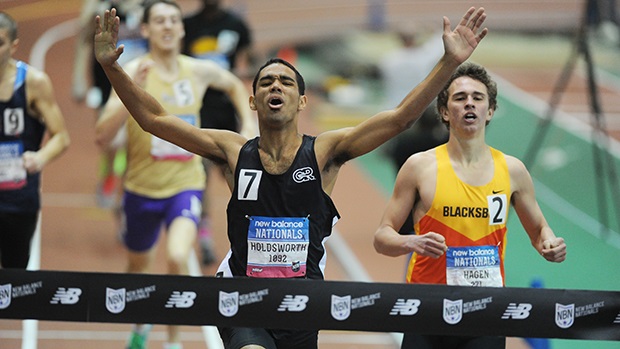 A national title in the 800-meter run wasn’t the only thing on the line Sunday afternoon at The Armory when 10 middle distance standouts awaited the starter’s gun.

As it played out, bragging rights for the state of Virginia also were very much at stake. Derek Holdsworth of Williamsburg captured the hotly contested battle, winning national glory in leading five other competitors into the 2014 top 10 with a US#3 1:51.72.

Trading the lead throughout with Blacksburg’s Kenneth Hagen, Holdsworth was in the top spot through 300 meters and then as the field got the bell for the final lap. Hagen, who finished second in a US#4 1:51.90, pulled back into the lead with about 100 meters remaining.

“If you want to win, you have to take control now,” the winner said. “So I got up there. I wanted to see what everybody else was doing.”

Holdsworth would have time for one final move, completing the pass for the gold medal with about 10 meters left.

“I just used that 500/300 strength I have and really focused on that last 50 meters,” Holdsworth said of the key to his victory. “That’s when the real race was. Kenneth (Hagen) wasn’t letting up, I wasn’t letting up. I thought back to all my races before and just really went for it.”

Robert Ford of San Antonio won the second of three heats and finished third overall in a US#6 1:52.04.