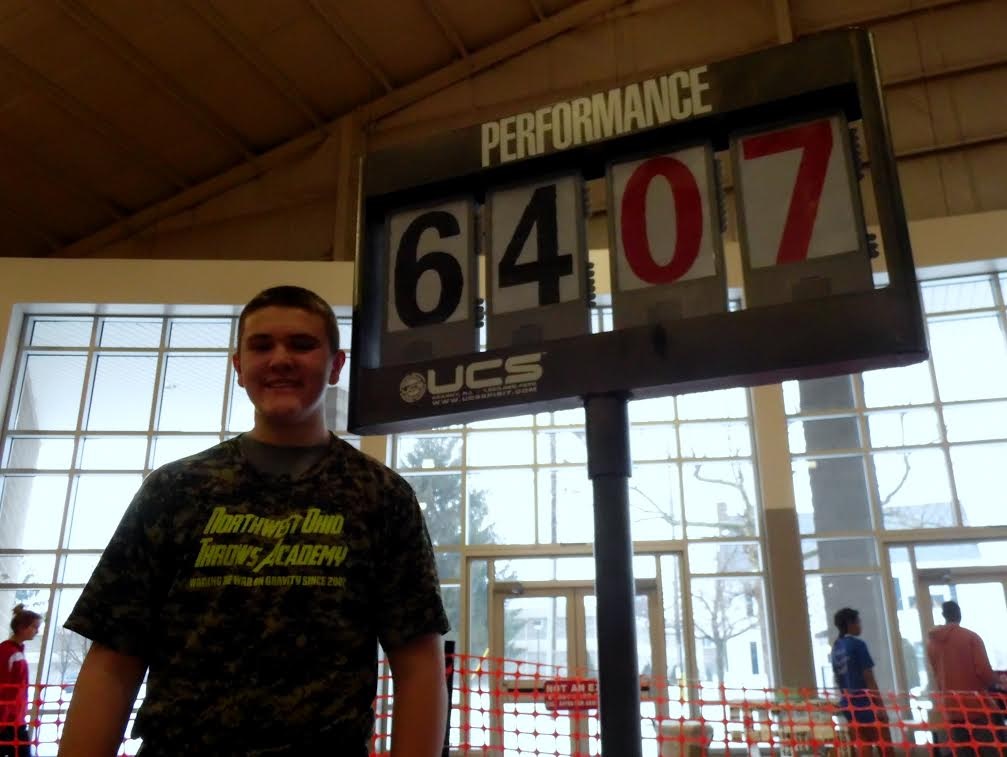 Photos and video from Matt Lane

Nick Lane, a freshmen at Bowling Green High School in Ohio, set a national freshmen class reocrd this past Friday at a University of Findlay high school meet in the 25 pound weight throw with a mark of 64'7.50". Lane broke a two year old record previously held by Kenneth Brinson from Marist High School in Atlanta, Georgia who threw for a mark of 64'4" as a freshmen back in 2012. The weekend performance also ranks Lane US #12 currently in the weight throw and #2 in the state of Ohio. 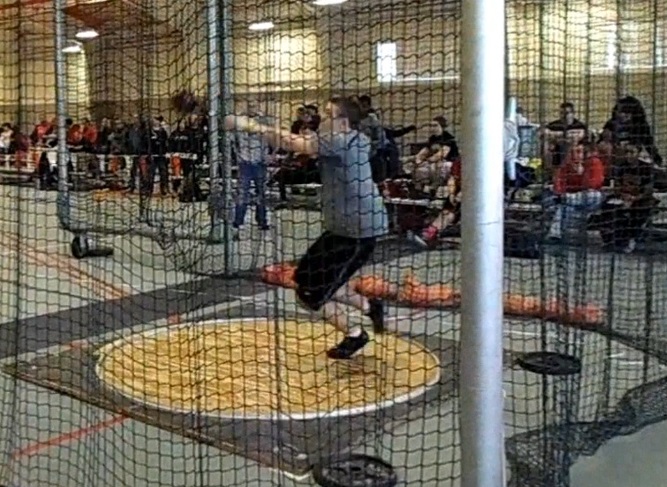 Watch a video of his record breaking throw below! Interview with Lane to be posted later.

MileSplit US: Congratulations on breaking the national freshmen class record in the weight throw. Was that a big goal for you coming into this season?
Lane: The pre-season goal that I had set for myself was 65 feet and ultimately breaking the freshman class record so I always had that tucked in the back of my mind.
MileSplit US: Share with us your background and how you got into throwing at a young age?
Lane: I had started throwing shot and disc with my dad around age 8 and at the time my oldest sister Paige was throwing jav at Bowling Green State University. By the summer when I was 10 we had arranged lessons with BGSU's throws coach which at the time was Justin Carvalho and given his vast background and experience and also my young age, throwing hammer became part of those lessons. Now roughly four and half years later, here we are.
MileSplit US: What went right for you in your record throw to achieve that new personal best mark and break the freshmen class record?
Lane: The previous weekend's meet I had fouled some throws that crept close to the record mark which gave me strong reason to believe it would come the subsequent weekend. I had a long, solid warm-up, felt the adrenaline pumping, stuck to my training, and just let-r-rip.
MileSplit US: How much farther do you believe you can throw this season?
Lane: That is a fantastic question. The 64' 7" throw was not as technically sound of a throw as one that could really push my distances. I feel my best throw could come through at the State Meet or New Balance where I would have a chance to rise to the level of the other competitors who I know will be throwing at their best.
MileSplit US: What areas do you feel like you could still improve upon?
Lane: At any level novice or professional I believe that there are always areas to improve upon. For me I'm working on my ball placement, trying to push the weight's high point to right of center of the sector and in turn develop a more stable, stronger finish because of that better balance. What I would like to become is a hybrid of Connor McCullough's length and level as well as the blistering speed of Justin Welch.
MileSplit US: Who are your coaches and what role have they played in your development as a thrower?
Lane: As I had mentioned, Justin Carvalho who is now coaching at the University of Findlay as well as the Northwest Ohio Throws Academy track club for which I am a member, is so crucial in my development as a thrower. He coaches in a way that is easily understood and is an extremely amiable person. I can't stress enough how much he knows about hammer, weight throw and Olympic lifting. His training regimen is constructed in such a way as to not only make athletes stronger in the weightroom but is designed for the specific strengths in throwing. His results are evident in personal success and also in the athletes he has coached like Justin Welch, Brad Szypka at Kentucky, and Logan Bryer who is currently ranked 3rd in the nation in the weight just to name a few but there are many others who have found success both men and women. (all NOTA members) I also receive great support from coaches Madaras and Hudok from Bowling Green High School.
MileSplit US: Will you be competing at the indoor this season? If so, currently ranked #12 in the country, do you feel you could compete for All-American honors potentially even as a freshmen?
Lane: I will be making the trip to New York and I am ecstatic to finally see the Armory. My hope for that meet is to retain my position or one that's close and be in final flight of weight throw. There is a multitude of very talented throwers this year and I know that a lot of them are itching to take my current spot so all I can do is throw my best and hardest. Anything is possible though.
MileSplit US: Are you excited about your future in the throws throwing so well as a 9th grader and knowing most only get better as they get older as they get bigger and stronger in age?
Lane: I am psyched for what's to come. When big-time strength kicks in I'll be interested to see where I'm at. My tech still has some big improvements that need to be implemented but I certainly hope for a bright future.

Inside Throws: Nick Lane Made A Name For Himself Last Weekend! Apr 28, 2017
Tweets by milesplit