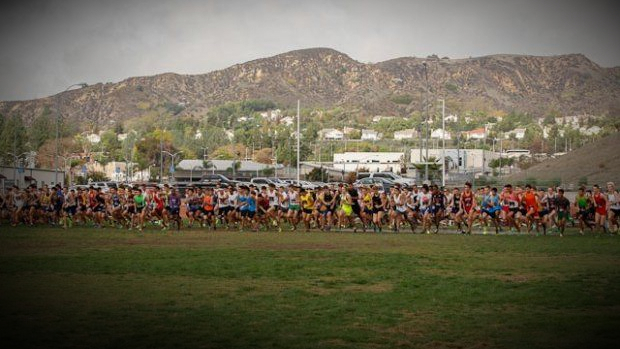 Saturday the 7th of December, the legendary Mt. San Antonio College Cross Country course in Walnut, CA will play host to the 34 Annual Foot Locker Western Regional Championships.  High school harriers have come from 12 states (AK, AZ, CA, HI, ID, MT, NV, NM, OR, UT, WA, and WY) as well as U.S. Citizens in overseas military installations to compete in one of 10 races for bragging rights for who is the "Best in the West".  The course which consist of 80% dirt and 10% asphalt is 5000 meters with 3 steep climbs (The Switchbacks, Poop Out, and Reservoir Hills) before finishing with near 300 meters on the Mt. SAC track.

The feature races of the day are the Girls and Boys Seeded races which start at 9:55 and 10:40 am.  The top 10 finishers in each of these races will qualify for the Foot Locker National Championships in San Diego, CA on December 14th, 2013.  Over the past 33 years the West has crowned 9 boys and 11 girls as National Champions.  The West Girls team returns Montana State Champion, Makena Morley from last year's National Championship where she place 24th.  She looks to return to San Diego among a talented field with over 5 state champions.  Her chase pack includes 7 other returning runners from the 2012 top 25 finishers.  California's Emma Abrahamson finished 14th last year along with Idaho's Sierra Manzer (16th) and Presli Hutchison (18th), all within 16 seconds of the 10th place finisher and final qualifying spot are all returning to the Footlocker West Regional this Saturday.  Anna Maxwell from Northern California along with Bethan Knights (Knights is enter in FLW but also enter and qualified for NTN on same day) of Southern California both lit up Mt. SAC's 2.91 mile course with sub 17 minute races back in October, which placed both them in a very prestigious group only 17 runners ever to run under the 17 minute barrier.  It is expected that the top 10 will cross under 18:45 on Saturday's 5k.

The Western Boys team returns two Foot Locker National qualifiers from last season.  Utah State Champion, Conner Mantz finished 12th along with John Dressel of Washington who was 14th in the 2012 Footlocker Nationals, return in hopes of back to back qualifying efforts.  The Boys Seeded race is as competitive as ever with 10 runners returning from 2012's top 36 finishers.  It also looks to have a minimum of Five State Champions competing as well.  Senior Joe Hardy of Washington has been tearing up the Northwest this fall and looks to be a top contender here for the title and a trip to San Diego.  Additionally, Oregon's star harrier Matthew Maton is in the house and riding a wave of success from winning a state title to winning the Border Clash race as well.  Idaho harrier, Elijah Armstrong finished just a mere 3 seconds off of the West team in 2012 looks to improve on last year's 11th place finish.  Big Bear High School of California has seen Ryan Hall finish 3rd at Nationals in 2000 and then in 2006, Chad Hall was crowned the Footlocker National Champion, now looks to have a 3rd qualifier in California State Champion, Caleb Webb (14th in 2012).   California has the potential to place multiple runners on this year's West team.  In October at the Mt. SAC Invitational, Californians Tal Braude and Garrett Corcoran (19th in 2012) had brake out performances with races that placed them 4th and 7th fastest time ever on the 2.91 mile version of the course. Third place in that race was Alaskan, Levi Thomet (32nd in 2012) who will be running for a third trip to Southern California this fall if he can finish in the top 10 qualifying for next week's Foot Locker Nationals in Balboa Park, San Diego.  A time under 15:45 should be needed to secure a spot on the 2013 Footlocker West team.