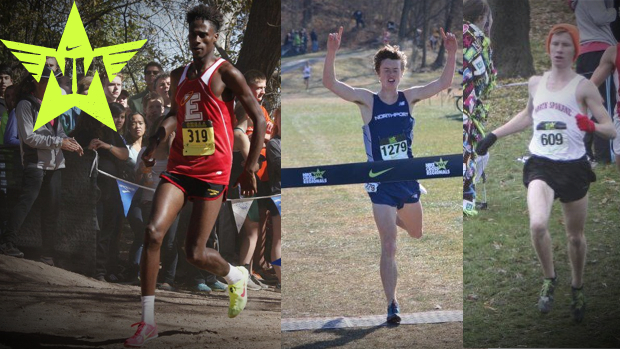 The boys individual race at NXN will be missing a few key competitors (running at Foot Locker), but that is a trivial point.  The field this year is loaded and the race up front should be one for the ages.

The two favorites at the front end of the field are Cerake Geberkidane (CO) and Tanner Anderson (WA).  Cerake has been given a speed rating of 198 and Tanner has been given a 200, closer than can truly be quantified or predicted.  Of course, that is why they run the races.

Cerake has had a break out year which saw him tear apart one Colorado course at altitude after another.  He rolled to a 14:46 winning time in September to record the fastest time ever run for a high schooler on CO soil and then won the 5A state title by 42 seconds.  He followed that up with a win at the NXN Southwest regional in which he tore after it from the gun and then faded and hung on for the win.  Doubtful he’ll make that mistake again at nationals.

Tanner trained hard this season to overcome a lack of good summer training and has been coming on very strong as of late.  Tanner won the WA 3A state title over a very competitive field including nationally ranked runners Joe Hardy and John Dressel.  He then won the NXN Northwest regional to earn his berth at the national table.

That is not to say there won’t be some very tough challengers.  Mike Brannigan (NY) and Kai Wilmot (WA) have also had very good seasons and both have looked strong late season.  Brannigan ran the second fastest time on the NXN New York regional course with a fast 15:29 clocking.  He put on an untouchable surge at 2 miles to show that he is fearless and very dangerous at the end of the race.  Wilmot will be looking to return to form and challenge up front in an effort to help his team, North Central, return to the podium again.

Addison DeHaven (SD) is another late-bloomer who won the Heartland regional race over Obsa Ali and could definitely surprise the front runners in Portland.  Obsa finished 10th last year in the mud, so he has experience and is coming off another great year which saw him win a MN state title despite losing a shoe early in the race.

The other challenger to a title could be last year’s surprise runner-up, Estevan De La Rosa.  Estevan’s big showing last year assisted Arcadia in capturing the team crown that year.  De La Rosa is stronger this year and looked scary good at the CA state champs despite finishing 2nd to Tal Braude.

Despite the strong runners up front there are quite a few talented harriers behind them who would like to break into the top-10 overall.  To put it into perspective, there are 34 runners with speed ratings between 193 and 190, so needless to say anything can happen.

My pick for the individual title is Mike Brannigan from New York.  The surge he put on after the hills at Bowdoin Park cannot be ignored and the difficulty of the Portland Meadows course should play into his favor.  Of course if Cerake Geberkidane cleans up his race strategy and runs smart early he has the strength to pull away from Brannigan late in the race.  And Anderson has a race savvy in championship situations that could make him dangerous if he is still in the mix late into the race.