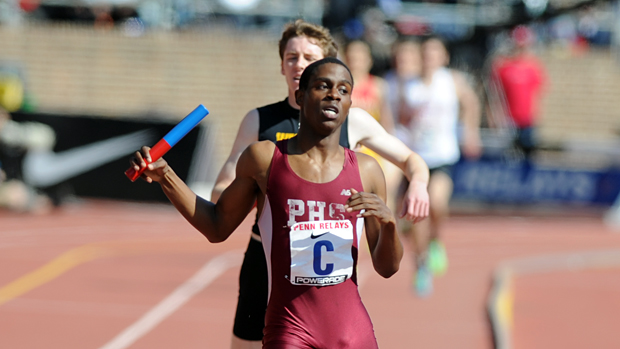 Jacob Clark rolled with a 1:49.17 split to win the title for Pleasantville. (Photo by Don Rich)

It was also a pleasant day for Pleasantville.

The New Jersey squad turned in an electrifying performance on Saturday by taking the Championship of America (COA) 4x800-meter relay with a nation-leading time of 7 minutes, 40.71 seconds. Twin brother Isaac and Jacob Clark both clocked sub-1:50 efforts for Pleasantville, which held off a strong Westfield (VA) quartet that finished just a few meters behind in second (7:41.84).

“It’s been a long time. These are like my children, man,” said head coach Alan Laws. “It’s a beautiful thing. We were hoping it was our time. It just so happened to be our time. There were a lot of great teams in there, but the guys were pumped up. We stayed here in town last night. They got a good night sleep. They were ready. They were ready mentally and physically.”

Four teams crack 7:50 in the preliminaries held on Friday. Along with Western Branch (VA), all four teams – Chaminade (NY), Bensalem (PA), Westfield and Pleasantville – were bunched together after the opening 800 leg.

At that point, Westfield held a two-second edge over Bensalem, thanks to a 1:53.64 from leadoff Max Chambers. Pleasantville forged to front by the halfway mark with Isaac Clark blazing to a 1:49.57 split.

“I was like this is our time to shine,” Clark said. “I just had to go out there and run to the best of my ability. I have been waiting for this. We all made it in my book.”

Westfield regained the lead before the fourth exchange and then it was Jacob Clark’s time to put the finishing touch. The talented senior covered his first 400 in 54 seconds and nearly matched that effort the final lap, cruising to the fastest split of the afternoon, a blistering 1:49.17. Westfield’s Nathan Kelly anchored with an equally-impressive 1:50.90.

The win was especially special to Laws, who was on a winning 4x800 team for West Philadelphia 30 years ago.

“I was hoping the 30-year mark would be the one,” he said. “We pulled it off and it’s a beautiful thing. I waited a long time. We had a team here in 2002. I thought my 2006 team would win it but they dropped the stick. I didn’t know if I would ever see it again. To see these guys do it is just a beautiful thing. These are tough guys, all four of them. It’s like a family, baby! This is the last time they are going to run together like this. It’s a beautiful thing to see.” 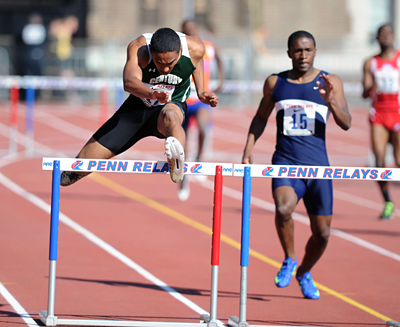 Century (DE) senior Julian Woods, a rookie over the seldom-run 400 hurdles, was the top American and second overall with a time of 52.45. He earned his placement by winning the unseeded heat.

“This is my second time running the 400 hurdles. I usually do the 300 hurdles,” said Woods, a two-time defending state champion, who owns a best of 37.51 for the 300IH. “Coming in I knew this was a longer distance than I am used to, but I just kind of went out in my 300 pace and hoped I would have enough to finish. I did. The 300 felt fine. But once I got to (the final) straightaway, that’s when it felt a little different. I held the lead at the final turn and powered down the final straightaway.”

“He went out hard,” said coach Stephanie Dickerson. “He really did. When he was coming around the backstretch, his stride was good. Sometimes when you get tired it changes a little. I could see him put his head down and he struggled with one hurdle off the turn. He’s not used to that placement yet. As soon as he got off the hurdle, he finished strong. He didn’t have any trouble coming down the last straightaway.”

The race was won by Jamaican Omar McLeod, who was timed in 51.62. Wellington Zaza of Garnet Valley (PA) was third with a time of 52.79.

“It feels pretty great,” he said. “I did pretty well in the qualifier and I knew I would be better but I didn’t think I would run this well. I am very excited.”

“We know he is very talented,” she said. “In Maryland, we only run the 300 hurdles and we only had one other opportunity to run the 400 (in 54 seconds) because that’s the qualifying time. We knew that would better competition he could run faster. We knew he was strong. We knew he was very fast. We were hoping it would all come together and it did.”

For the second straight year, Milton Hershey (PA) senior Ibn Short was the first American in the COA high jump with a PB of 6 feet, 10.25 inches.  Jamaica’s Christoffe Bryan, the top seed, earned the title with a leap of 7-0.5. Sparta (NJ) senior Zach Davis tied for fourth, clearing 6-7.75.

Short admitted he wasn’t affected by Bryan, who came into the competition with an all-time best of 7-2.5 and a heavy Jamaican crowd sitting in the stands behind.

“For me, there is no pressure,” Short said. “It’s me versus myself. I am out here to do my best and I am going to be proud of the performance as long as it’s a PR.”

“I spent this week perfecting my approach, my main problem,” he added. “My form was there. I spent some time doing that with my teammates. Most of the pressure is in my mind.”

Short, a second-place finisher at the NBNI, was third at Penn a year ago. He’s aiming to continue the success this indoor season.

His performance on Saturday certainly helped with his confidence level.

“It gives it a boost,” he said. “Who can say they are the first American at the Penn Relays?”

Just enough for a ‘W’ 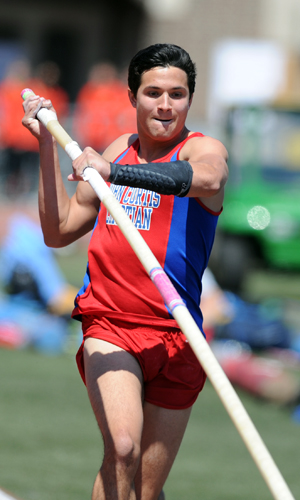 With a height of 15-9, Dylan Duvio of John Curtis (LA) came more than a foot below his best, but it was good enough to snare the title in the pole vault. He defeated Palymra (PA) senior Timothy Moses on fewer misses. Moses also cleared 15-9. Moms Hill (NJ) senior Jordan Pacheco was third at 15-1.

“I am happy with the win. That’s what I came here to do,” he said. “It was a good day. It’s really hard to jump at Penn. The wind was kind of everywhere. I did alright. I wish I could have done better, but I did alright.”

“He almost set the record when he was a sophomore,” Dylan said.

The younger Duvio, who will also attend Stanford, was second at the New Balance National Indoor (NBNI) Championship. Along with his individual crown, he does have something his brother doesn’t.

It was all Jamaica in the two shortest relays.

In the 4x400, Jamaican squads took the top three positions with Calabar holding off Munro College by .02 with a winning time of 3:09.22. Union Catholic, the recent NBNI champions, was the top U.S. team, placing fifth at 3:16.06.

Jamaica had the first five placements in the 4x100 with Kingston College winning with a time of 40.44. Junipero Serra (CA) was sixth at 40.95.

Just like the relays, Jamaica dominated the jumping events, too. Calabar’s Sadiki Eddie and his compatriots occupied the top five in the long jump with Eddie beating Jamaica College’s Nicolaus Phynn with both reaching a distance of 23-10.75. Placing sixth was Tallwood (VA) senior Rafael Moore with a leap of 23-0.75. Pennsauken (NJ) senior Antwan Dickerson finished seventh (22-10.75) and Gaston Assoua of Hubie Blake (MD) was eighth (22-9).

No. 1 ranked Clive Pullen of Kingston College lived up to his top seed by capturing the triple jump with a 49-10.5 effort. Jamaica College’s Clayton Brown placed second at 48-11.5, just ahead of Woodside (VA) senior Aaron Worrell, who was third at 48-8.75. Manchester (VA) senior Christian Rogers took fifth at 47-5.