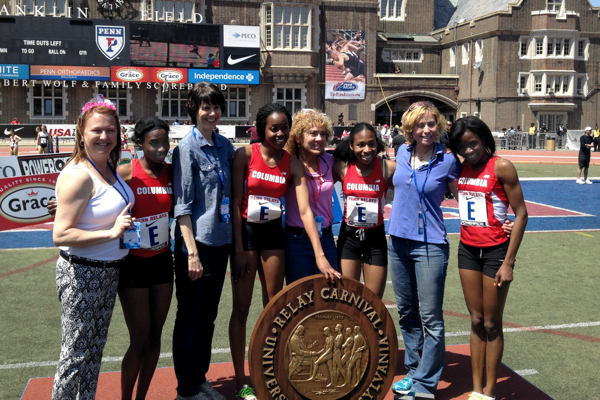 PHILADELPHIA – Back in 1983, Lisa Morgan and her Columbia (NJ) High teammates came painful close to a memory-keeper at the Penn Relays Carnival, placing a heartbreaking second to fellow New Jersey squad Bernard’s in the 4x800-meter relay.

Thirty years to the day, Morgan was back inside Franklin Field on Friday along with her former rivals for the 119th edition of the historic meet. She was there as head coach of a very-talented 4x800 team from her alma-mater.

While Morgan wasn’t able to experience the thrill of hoisting the Penn Relays’ Wheel three decades ago, she was able to witness a victory by Columbia.

And the excitement may have been just the same.

Fueled by a sizzling anchor leg from Olivia Baker, the Excelsiors overtook Jamaican team  Edwin Allen with just 50-meters remaining to claim the coveted Wheel and a shiny, new gold watch with a US #1 clocking of 8 minutes, 56.37 seconds. Edwin Allen was second at 8:56.86.

The title is the first for a N.J. team since Bernard’s did it in that early 80s race.

“It’s just so special because I was in that race. I was in that race, that ’83 race and we came in second,” Morgan said. “I ran the second leg and got my girl where she needed to be. We were leading the race and unfortunately (the third leg) tripped. She’s a very good friend of mine, Felicia Blake, she’s a track coach at West Orange now.  We ended up second in that race. (Today is) very important to me, to come back on this day and to get that 4x8 title.”

Columbia stayed within striking distance throughout the race while Edwin Allen maintained the front-runner position for most of the first three legs. Trailing by at least five seconds on the last exchange, Baker went to work, eventually catching Edwin Allen’s Asshanni Robb the final 20 meters.

Morgan was confident her squad could pull out the victory. But even though she had faith that Baker could perform, she was a little uneasy when she got the baton.

“I was more nervous on the first lap,” she said. “I told her to be patient and not kill the first lap; that the race begins on the second lap. I didn’t know if she would be a little too crazy, but I looked down at the watch and I was like okay she is on. I didn’t want her to get too far so that she was out of striking distance. When I saw her moving on that third 200, I knew, I knew. When she saw (the lead) girl I was like make sure she is within distance with 200 meters to go and we are golden. She was.” 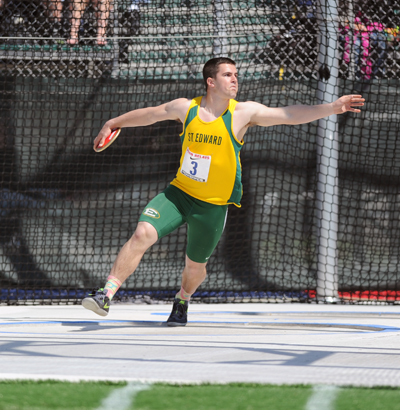 St. Edward (OH) senior Aaron Zedella overcame some early-meet jitters to finish third overall and top American in the discus with a personal-best of 193-0. Zedella had three of his throws further than 184 feet in the finals, achieving his best mark on the last attempt.

“I think (at the beginning) it was the nerves setting in. It’s the Penn Relays, you have to be a little nervous coming in,” he said. “I actually almost didn’t make the finals. I made it on the last preliminary throw (a 177-11 effort). After I got that out of the way, I did some warm-ups and they were fine. I knew I could actually do it in the finals.”

Zedella, a fourth-place finisher in the discus at last year’s outdoor state meet, faced a talented field. The title was won by two-time World Junior champion Fedrick Acres of Calabar in Jamaica, who was three-feet shy of a meet record with an outstanding throw of 225-6. Fellow compatriot Joshua Awolunde of Delsea Regional was second at 195-10.

“I saw coming in that (Acres) was a two-time World Junior champ. I knew that was going to be a tough task,” Zedella said. “It was cool to watch, though. Those were out there.”

Proffitt cashes in at javelin 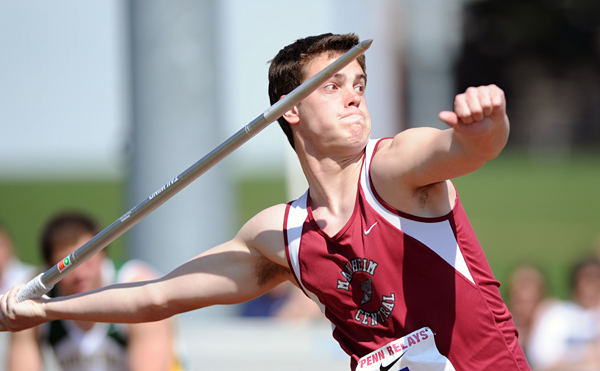 Manhein Central (PA) senior Cole Proffitt copped the javelin with a PB and US#3 toss of 206-0. He improved on his best of 200-9, set at last year’s PIAA state meet where he finished third.

“I definitely thought it was possible,” he said. “I was working with my coaches and we were hitting 200s in practice. It was flying low. I thought I would definitely have a chance. I just had to put it out there.”

Proffitt has big plans for the rest of the season.

Three-time defending champion Long Beach Poly came short of its fourth team crown in the 4x100, but still secured the COA title with a third-place time of 45.80.

Jamaica, which has dominated the event over the years, had the top two placements. Holmwood Tech claimed the prize with an outstanding time of 44.82. Edwin Allen was second at 45.15. 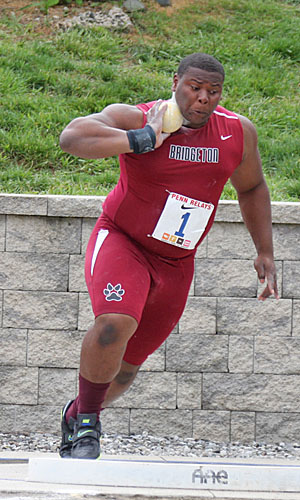 There was no surprise in the boys’ shot put as Bridgeton (NJ) senior Braheme Days successfully defended his title. Days, who won his second straight crown at the New Balance National Indoor Championships last month, unleashed the metal ball a distance of 67-8.5.

Jamaica’s Chadrick DaCosta of Kingston College was second at 63-1.25 and Smithtown West (NY) junior Benjamin Bonhurst was third with a time of 59-9.75.