Her pelvis was fractured in three different places and her left arm also suffered multiple fractures. Doctors have estimated a timetable of at least three months before she can walk normally again.

Thanks to her background in running, Anne Dutton considers herself lucky.

An Iowa native and avid runner, Dutton has been spending the last month at her parent’s Midwest home. She is not just there to visit. She is recovering from a serious accident back on Sept. 22 where she was struck by a cab driver while crossing an intersection in Baltimore, Maryland. 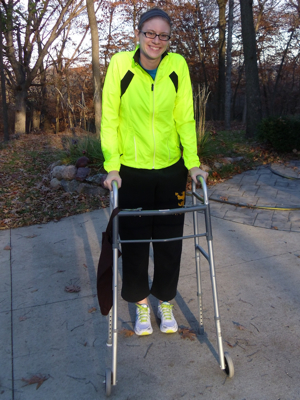 The accident put Dutton in the hospital for nearly three weeks with 12 of those days spent in the trauma unit.

“All things considered,” she said. “I am doing pretty well.”

Runners are resilient people, particularly those that run long distances. To achieve any sort of success, pain is often a necessity. The diehards, the runners that take the sport seriously, are willing to make that sacrifice. While the legs are important, usually what lies between their ears holds equal bearing.

Dutton, a former track and cross-country runner at Valley High in her hometown and at St. Olaf College, a Division III program in Northfield, Minnesota, believes the valuable entity she learned as a dedicated harrier for the last decade has been an integral component in the healing process, both for her physical state and her mind.

“I think that has been a big part of the recovery for me,” Dutton said. “As a runner, you learn very quickly how to be mentally tough. The physical part is important, but having mental toughness is just as important.”

Her mental toughness was tested to its max that early September night. The 23-year-old Dutton, an Advocacy Assistant for the Lutheran Immigration and Refugee Service in Washington, D.C., was in Baltimore to attend a four-day conference for work and also visit her brother, who is doing his residency in Internal Medicine at John Hopkins Hospital.

After arriving by train to the city in the morning, Dutton would experience her “temporary life-changer” less than eight hours later. While walking to her brother’s apartment at around 5:30 p.m. to drop off her suitcase, she was hit by the cab while crossing an intersection.

“He didn’t see me for whatever reason and struck me in the crosswalk,” Dutton recalled. “I didn’t have a clear sense what happened. It happened so quickly. He hit my left hip. I went on the hood of his car, rode it for a brief moment and then fell off and landed on the road.”

Initially, Dutton didn’t feel her injuries were that bad.

“At first, I’m like, ‘Okay, I should be good. I am going to get up and walk it off.’ But I couldn’t move my arms and couldn’t move my legs,” she said. “After that, I am like, ‘This is something on a different scale than I have ever experienced.’”

Once Dutton was lifted by the EMTs into the ambulance, which was transporting her to John Hopkins where her brother was working at the time, the results of the accident kicked into gear. 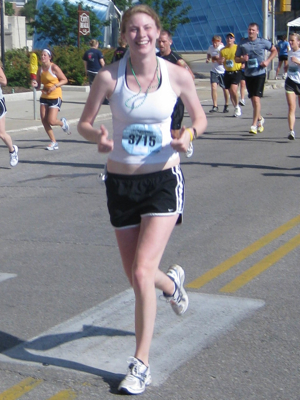 The extent of the injuries included fractures to the head of the humorous bone in her left arm as well as fractures to the left side of her pelvis. Five days after the accident, she had to withstand 9-10 hours of surgery. She had a plate and seven pins inserted into her shoulder. Her pelvis required an external fixator, which are two pins that go into the pelvis and puncture through the skin and are attached to a bar that runs across the front of the body. It’s used to stabilize the pelvis.

When Dutton was struck by the cab driver, she admits a lot of things were zipping through her head.

“There was a kind of sense of disbelief,” she said.  “I was like, ‘I can’t believe this is happening. What will my physical capabilities be?’ The thoughts were racing. ‘What does this mean? How long will it be until I recover? Will I have full recovery?’

At the time of the accident, Dutton was training for the Veteran’s Day 10K in D.C., on Nov. 12. Just that morning, she had finished one of her long runs, a seven-miler at 7 o’clock.

“It was a great fall day,” she recalled. “I had already done my base building for a while. It was my first week of structured training.”

After 17 days in the hospital, Dutton has spent the last four weeks at her parent’s house where she regularly receives physical therapy.

“We are making progress, everything is encouraging,” Dutton said. “I have been so lucky in everything…The doctors that gave me surgery were phenomenal. They did an awesome job.”

“I feel like I had this one big thing go wrong, but everything since then has gone incredibly right,” she continued. “I don’t have any internal injuries or head injuries, which is huge.”

Dutton, who has to use a walker, a wheelchair or crutches for mobility, will not be able to put full weight on her leg and walk normally until about 12 weeks. As of now, she can’t lift her arm more than 45 degrees.

But the signs are all positive that she’ll have a full recovery and be able to resume running again. Dutton feels her background as a runner has been the most important part in her road back.

There’s another benefit from running that Dutton feels has aided the healing.

“People think of running as an individual sport, but sometimes a team is also needed,” she said. “I think people think I can do this on my own. I have had some incredible support from some former teammates, my family and my friends. I feel I don’t have to do this alone. It’s been instrumental in my recovery.”

Dutton is confident she’ll be running a road race in the not-so-distant future. It’s that runner’s mentality.

“I will not make it this year, but as soon as I can I will be back,” she said. “I will be back without a doubt.”