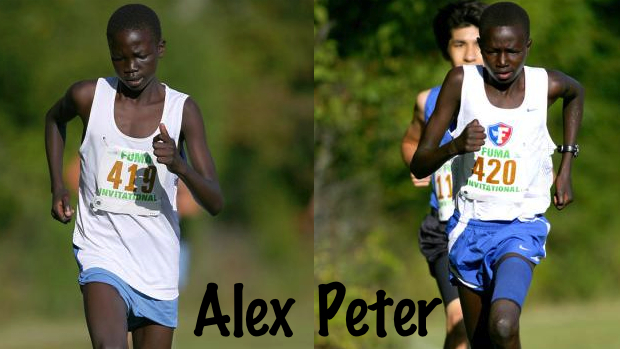 Alexander and Peter Lomong at the Fork Union Invite 2012. (Photos by Ranonce)

Back in the fall of 2007, HBO aired a moving documentary about distance runner and U.S. Olympian Joseph “Lopez” Lomong. It told the story of the terrifying early life of the African native, who  was kidnapped at the age of 6 by rebel soldiers of the Sudan People Liberation Army (SPLA) and put in a refugee camp miles away from his home.

With two other friends, Lomong escaped the camp where several children died from the unruly treatment. Ten years later he was given the opportunity of a lifetime when he was adopted by an American couple through the Catholic Relief Services. He soon prospered as a runner, starring for Northern Arizona State and making the last two Olympic teams.

Major Winston Brown, head coach of the Fork Union Military Academy in Virginia, was one of the many people who were drawn to the documentary, which was featured on Real Sports with Bryant Gumbel.  What particularly caught his eye, besides the incredible saga that Lomong went through as a youth, was the world-class runner reuniting with his family in Kenya, including the two young brothers he never met, Alex and Peter.

“It was an incredible piece,” Brown stated. “He said that he hoped someday he could bring his brothers to America.  I said, ‘We can do this.’ We had an alumnus of the school who was a teammate of John Hayes (Lomong’s coach at Northern Arizona). That night we got in contact with (him) and he got in contact with Hayes.

And his wish was eventually granted. 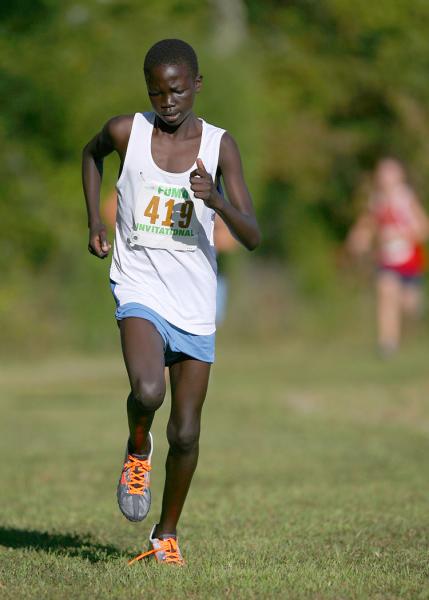 In 2008, right after competing in the 1,500-meter run at the Olympic Games in Beijing, Lomong went to Africa to begin the process of getting his two brothers to the states. After one more trip to his homeland and a “lot of red tape,” Alex and Peter arrived in Virginia and Fork Union on Feb. 13, 2009.

“They (the government) made it so hard,” Brown said. “Fortunately the school had the ability to use an I-20 (student visa).”

Peter, a sophomore, and Alex, a freshman, now promising harriers at Fork Union, recalled the memorable day when their brother made his surprise visit.

“I was walking on the road and these kids were all running towards my house,” Peter said. “They were surprised to see white guys with a camera (the HBO crew). When I looked and saw him, I was like, ‘Oh, man.’ Every time I made eye contact, I cried.”

“I just remember it was a nice day,” Alex (pictured, left) said. “This trailer shows up and I am like, ‘Oh my God! You look just like me.’ It was just amazing.”

Just like their famous older brother, the two younger siblings were taken in by an American family. They now live with their 47-year-old coach, his wife Beth, and their young son, Jonah, born less than a year after the brothers arrived.

“We did it a little differently,” Brown said. “The two boys live with us. They have become our family. We felt with their backgrounds living in a boarding school wasn’t the answer. They are wonderful children…After they arrived, my wife got pregnant with my first child, Jonah. They are great big brothers.”

It’s apparent the gene pool hasn’t skipped the two brothers. As an eighth-grader last year, Alex, who turned 15 on Sept. 30, clocked a time of 2 minutes, 1 second for the 800. Peter sizzled through a mile at 4:46 as a middle school runner and now has a best of 4:35.

“(Peter) hasn’t had a breakthrough yet, but you can see it’s going to happen,” Brown said. “Alex has tremendous leg speed.”

In cross country this season, Peter and Alex fluctuate with teammate Russ Garver for the top three spots on the squad. In their first meet of the fall, the Fork Union Invitational on Sept. 8, Alex ran a personal best of 16:20 for the three-mile course to place eighth overall. Peter was right behind in ninth with a time of 16:22.

Both runners have your typical long distance runner’s physique - tall, slender and muscular. Peter stands at 6-foot-1, while Alex is 5-10. Brown realizes the potential of his two young stars and is taking the patient approach to their training.

“We have not tried to get blood from a turnip, sort of speak,” he said. “We haven’t really picked up the training yet. We want it to be gradual. We are handling it so that they have the best opportunity (beyond high school) and have something in the tank when it comes. There is a lot of potential there. They still don’t understand racing yet, but there is a lot of potential there.”

The boys had a chance to watch Lopez compete in the 1,500 at 2008 Olympics, watching the Games on a brand, new color TV, a gift that their older brother brought to them in Kenya.  Due to his incredible story, Lopez was elected to carry the American flag for the Opening Ceremonies in Beijing.

“Seeing him carry the flag was amazing,” Peter said. “I couldn’t believe what he accomplished. I was very, very proud of him. I cried when I watched it on TV. It gave me a lot of motivation.” 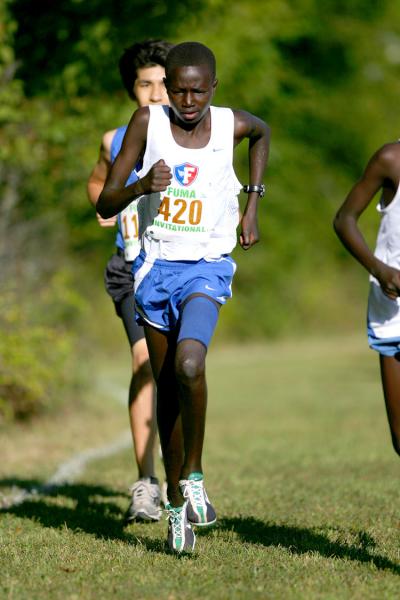 While that was a memorable time for the siblings, they were treated to something even better with their American family this past summer when they flew to Eugene, Oregon and witnessed firsthand Lopez making his second Olympic team by placing third at the U.S. Trials in the 5,000.

Inside the University of Oregon’s famed Heyward Field, he battled fellow Nike teammates Galen Rupp and Bernard Lagat in a tight race with Rupp winning in a meet record of 13:22.67. Lagat was second at 13:22.82, while Lopez was third with a time of 13:24.47.

“It was a big thrill for them,” Brown said. “Lopez was really great about it. He took a victory lap with them and took them into the press tent. They got a really good view of what life is about as a (world-class runner).”

The race came down to the final lap with Lopez making a move to the front with about 300 meters remaining. Rupp and Lagat caught him with 200 to go and then Lopez had to fight off a strong effort by fourth-place finisher Andrew Bumbalough (13:26.67) to nab the final spot for the team.

“It made me nervous seeing him live,” Peter (pictured, right) admitted. “You feel he is not going to make it. It was one of the best days of my life.”

“Your heart is just beating so hard,” Alex said. “We flew that long to see him run and it was worth it. I was screaming and crying at the same time.”

While there are similarities between the two talented brothers, Brown does see some differences, too.

“Peter works very hard in school. He used to work hard in the fields in Africa. He never takes school for granted,” the coach said. “Alex is a little more artistic. They are very conscientious kids. They are just great kids.”

Although they never had to experience what their older brother had to endure with the horrors of the Sudan war, Alex and Peter feel grateful that they were given the chance to prosper in the United States where opportunities, such as a good education, are plentiful in comparison to their homeland.

“Everything is really cool,” Alex said. “I am having fun. America is amazing and cool. We live with wonderful people. Life is good here.”

“It’s a great opportunity to be here. I like it,” Peter said. “It’s truly amazing to get the opportunity, and at this school. It’s really helping me out.”

The two brothers have adjusted well to their new surroundings and have big plans now and in the future. Peter wouldn’t mind following in the footsteps of his famous sibling.

“I keep telling myself I need to run harder and harder,” he said. “I am thinking my talent is in the 800 and 1,500. My goal is to be in the 2016 Olympics. I will have to put every minute into track and fight through it.”

For Brown, the hardest part for him may come in a few short years – a bittersweet time when Peter and Alex head off to college.

“I am looking forward to it, but I am going to miss them,” he said. “They are like family. It’s a wonderful experience all the time.”