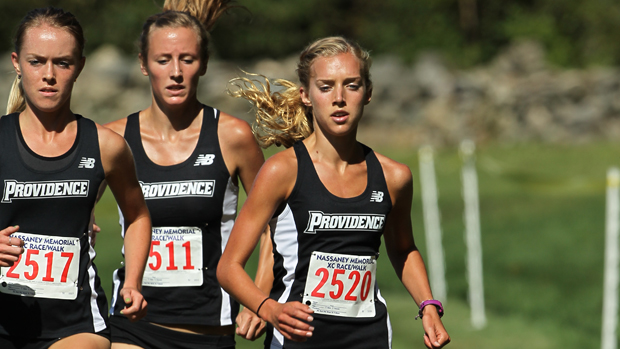 Sisson (2520) leads the way at the Bryant Invitational (Photo by dspics.com)

Emily Sisson wants to make one thing clear about her decision to transfer to Providence College after just a year at the University of Wisconsin.

“I have said it so many times I hope it doesn’t sound rehearsed. I loved Madison. I loved Wisconsin so much. It was the hardest decision I ever made,” she said. “I had a great group of friends back there. Madison is beautiful. It’s a great running town. It just wasn’t a good fit for me.”

The Badgers’ loss has certainly been the Friars’ gain. With the addition of the 19-year-old Sisson, a celebrated high-school runner while at Parkview (Mo.) Central-Chesterfield, an already-loaded PC team quickly moved up the national rankings and was No. 3 in the U.S. Track & Field and Cross Country Coaches Association (USTFCCA) preseason poll.

The PC women have everyone back from last year’s squad that finished ninth at the NCAA Championship. Included among their roster is junior Shelby Greany, who was 12th overall at the cross-country nationals and senior Hannah Davidson, a second-team All American in indoor track.

In her inaugural season of cross country last year, Sisson broke through with a 14th-place finish at the NCAA meet to earn All-American status as a frosh. Needless to say, longtime PC coach Ray Treacy was quite pleased when he got the news of Sisson’s decision to transfer to his Friars back in late June.

“When you add an athlete like that to an already-great squad, it kind of gets you a little bit excited for the season ahead,” Treacy said. “She already has the potential to be top 10 in the country. We have the personnel and what Emily brings to the team is that depth.”

Sisson begins her second year as a collegian after an unforgettable four years as a high-schooler where she won 11 state crowns (cross country, track), captured an individual 5,000-meter title at the Nike Indoor Nationals and is the U.S. record-holder for the 5K with a 16:34.76 best. Among other noteworthy performances, she also had a pair of third-place efforts at the Foot Locker Cross-Country Nationals and has competed internationally at the Pan Am Games and the IAAF World Championships.

Her first taste of college competition couldn’t have been better while at Wisconsin where she was the Badgers’ No. 1 cross-country runner. She finished second at the NCAA Great Lakes Regional, placed third at the Big 10 Championships and capped off her fall season with her outstanding finish at the nationals.

“I was hoping to be a little bit higher. I always have really high goals,” said Sisson. “But I can’t be disappointed with that, an All American as a freshman. I was hoping for top 10. It was a great race, a bunch of great runners in that race.”

Sisson will now compete for a team that has had their share of success under the direction of Treacy. In his 25 years for the Friars, the Ireland native and former PC standout has produced 134 All Americans, 11 NCAA individual champions and 13 Olympians. His PC squads have also won 16 Big East crowns, 20 New England titles and in 1995 copped its lone NCAA championship.

Sisson competed in her first race for the Friars at the inaugural Shawn M. Nassaney Cross-Country Invitational at Bryant University on Sept 10. The Friars ran away with the team title among the 11 schools with Sisson, sophomore Laura Nagel and Davidson coasting to a 1-2-3 finish. The trio hit the first mile in 5:08 and finished in unison with Sisson awarded the victory with a time of 17:09.99. Nagel was timed in 17:10.15 and Davidson crossed the line at 17:10.83.

“I felt good,” she said afterwards. “I felt a little tired. All my roommates are kind of getting over a cold right now, but it’s great because whenever you are having a bad day Laura and Hannah are there to say come on let’s stick together and push the pace through.”

Ironically, the Nassaney meet was the second time that Sisson ran at Bryant. In her only other visit to the east coast prior to her commitment at Providence College, she claimed her first national title on the campus, winning the Junior Olympics X-C title as an eighth-grader from Nebraska in 2005.

“There was a blizzard that weekend,” Sisson recalled. “All I remember is being white.”

Based on what she’s done so far, Treacy believes Sisson has potential for greatness at PC.

“She’s already very, very good. She’s done some great things,” he said. “She wants to make the next step. There’s lot of steps along the way. She wants to put herself in the best position possible to make those steps. She’s seen people before that have made the steps. That’s what has gotten her excited about the future.”

Even though it was difficult, Sisson feels in her heart she made the right decision coming to Providence with Treacy at the helm.

“I have a great coach here with Ray,” she said. “He is doing a great job preparing me. I have confidence in his plans, in his programs. It’s also amazing having these girls to run with and just pace off of. We just have a great team comraderie. I love it out here. I love it out east. I have only known the Midwest my whole life. The northeast is a beautiful place to live. The people here are really nice.”

The Friars will next compete on Sept. 30 at the Paul Short Invitational in Bethlehem, Pa. Sisson will get a chance to see her old teammates on Oct. 14 when PC competes in the Wisconsin Adidas Invitational in Madison. The NCAA Championships are set for Nov. 21 in Terre Haute, Ind.

If everyone stays healthy, that’s a meet the Friars could make some noise, especially with the addition of Sisson.

“We were ninth last year and we have everyone back,” Treacy said. “This year, put Emily in the mix and it kind of puts you in that mix. But at this stage in the game you could be anywhere from first to 12th. There are 12 teams in the country that probably think they could do really, really well. That’s all we are right now. We are one of the teams that think they can do really well. It’s a matter of keeping everyone healthy; keep training and not worrying about anybody else.”

Sisson’s looking forward to the season ahead and her squad’s chance at the NCAAs.

“It’s so exciting to being part of this team and to train like this,” she said. “I really want to do well here and pray we all stay healthy; just keep improving slowly and hopefully we have it on the right day.”