* Cory, Olivia and Ashley discuss athletes to watch at the CYUP Misfits Invite on On The Line.

The CYUP Misfits Invitational has a history of producing nation-leading times, top state marks and even national records.

Now in it's third year, the meet will host almost 900 athletes at Chicago's Worrill Center on Saturday chasing after stellar achievements like those before them have reached in years past.

A distance national record, nation leads in the sprints and hurdles and a new elite mark in the pole vault could potentially all go down this weekend considering the stacked lineup headed to CYUP Misfits.

Below, find a complete breakdown of the athletes to keep an eye on heading into the weekend at CYUP Misfits.

Here's What You Need To Know For The Misfits CYUP Invite It's pretty common knowledge now that Burns will be eyeing a potential national record this weekend in the indoor 2-mile.

The Oregon signee out of Southern Boone County doesn't have many indoor performances under his belt in his career, but he'll look to add quite the storied indoor effort in his season debut on Saturday, chasing after Edward Cheserek's 8:39.15 all-time high school best from the 2013 Millrose Games.

But record or not, expect Burns to open up his indoor season firing on all cylinders.

He's coming off the best cross country season of his high school career, clocking a 14:27.30 5k PR for second at Team Midwest Regionals and placing 32nd at Team Nationals.

Looking at his resume in the 2-mile, Burns holds an outdoor PR of 8:45.00 from the Brooks PR Invitational but has never contested the event indoors.

You can't forget, too, that Burns has that sub-4-minute mile speed to his advantage. He joined the elusive club last outdoor season with a 3:58.83 mile effort at HOKA Festival of Miles.

Burns will lead a 2-mile field on Saturday loaded with heavy talent -- newly-minted Minnesota indoor 3k record holder Noah Breker, Team Nationals fifth-place finisher Jackson Heidesch and Kansas cross country state champion Wyatt Haughton will all be there. That could make for an all-time race, especially with Burns leading the helm and hunting for history. One of the nation's top returning distance runners will make her 2023 debut this weekend looking to complete a successful double.

David will lead two talented fields in the mile and 2-mile at CYUP Misfits, and she could likely chase after top marks nationally in both events.

CYUP Misfits will also serve as her first meet since ending her successful senior cross country season where she finished eight at Team Nationals and won an Illinois Class 2A state title.

David's chase for a double win could prove quite entertaining on Saturday, as she'll be challenged by fellow Illinois distance great Grace Schager in the mile and a sub-10:30 2-miler in Chicago Latin's (IL) Mia Kotler. But look for David to command both fields from the gun and go for the impressive double on Saturday.

Regnier has already been on a tear this indoor season, making national headlines with a US No. 1 1:51.56 in the 800m at the Tracksmith Twilight Indoor meet on Jan. 7.

But the new Wisconsin 800m indoor record holder will go after a new challenge at CYUP Misfits -- testing his speed in the 300m and 600m.

And where did Regnier clock that 35.08 300m PR? At the CYUP Misfits Invite last year.

He could very well find similar success at the same invitational a year later.

Regnier also has momentum to his favor going into this meet, already holding two nation-leading performances and just recently announcing his collegiate commitment to UNC-Chapel Hill.

He's certainly developed into one of the top mid-distance talents in the nation, and with competitive fields in the 300m and 600m, that could propel Regnier to even more impressive performances on the indoor oval. Scales proved to be the most dominant sprinter and hurdler in Illinois during both indoor and outdoor seasons in 2023, and now the University of Kentucky signee will look to be one of the top contenders in her specialty events in 2023.

She will open up at CYUP Misfits in the 60m and 60mH -- two of her best events -- and could very well shoot to the top of the national leaderboards following her Saturday efforts.

Scales holds PRs of 7.72 in the 60m and 8.72 for the 60mH, both set last indoor season at adidas Track Nationals where she placed in the top five in both events.

But perhaps more impressive is that she comes into her senior indoor season following a breakout outdoor campaign as a junior where she went undefeated on the season in the 300mH and only lost one out of 15 races in the 100mH over the course of her racing calendar. That certainly shows that Scales knows what it takes to win, and she'll be a favorite to sweep the short hurdle and sprint events on Saturday.

Scales will matchup with current US No. 6 in the 400m in Claire Farrell in the 60m and will battle top-30 hurdler Brianna Dixon in the 60mH. A double win for Scales would be quite the impressive start to her 2023 indoor campaign and make a statement both in Illinois and on the national stage. Another athlete could enter the national conversation this weekend in an event that's already filled with elite performers -- the boys pole vault.

Indiana's third-best indoor pole vaulter in history -- Cody Johnston -- will compete on the runway this weekend for the first time since finishing fifth at the USATF U20 Outdoor Championships in June.

The University of Illinois signee could very well be the next pole vaulter this season to near the 17-foot mark. He holds an indoor best of 16-7 from the Hoosier State Relays in 2022, but cleared 17-0 once during outdoor competition at the Dick Dearduff Invite.

During the outdoor season, Johnston never cleared anything less than 16-0, making him a serious contender in the event and one of the top returners as a senior this year.

This indoor season has already shown the depth of talent in the country at the pole vault discipline, with the top 13 boys vaulters in the U.S. all holding season bests above 16 feet. Johnston could likely join that club on Saturday in just his first competition of the 2023 season. 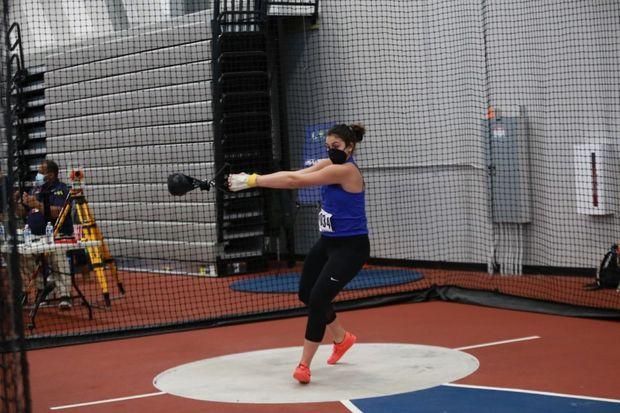 For Mihas, and for many other elites in the field, the CYUP Misfits Invite will serve as a 2023 indoor season opener, and for one of Illinois' top returning throwers, it could be a statement-making debut.

Mihas could very well put herself among the top weight throwers in the nation with a solid performance on Saturday. She holds a 46-6.25 best from the outdoor season but was ranked among the top 35 girls in the event nationally during the 2022 indoor season. Mihas went on to compete at New Balance Nationals Indoor last season in the weight throw where she finished 27th.

But the outdoor season served as a true breakout campaign for Mihas. She placed among the top 10 in the hammer throw at both New Balance Nationals Outdoor and NSAF Nationals, and she secured a pair of top-25 finishes in the discus at the championship meets as well.

Now beginning her final season before heading to Harvard in the fall, Mihas could potentially rise to a top US ranking in the weight throw. And in the shot put, she'll also look to reach a near-40-foot mark, or potentially eclipse the 38-5 event PR she set at CYUP Misfits two years ago in 2021. Jones may very well be one of the most confident racers in the nation, and he'll put his speed on full display at CYUP Misfits as he chases after a new PR in the mile.

He emerged during the cross country season as one of the most consistent racers at the 5k distance, but Jones has already shown this indoor season that he can drop down in distance and compete with the best. In early January, Jones opened his senior indoor campaign with a 4:11.45 mile and 1:55.20 800m just a few weeks after 10th at the Champs Sports XC Championships.

And just last weekend, Jones tuned up some of that speed again ahead of his mile on Saturday, clocking a 1:55.83 800m at the MITS @ Eastern Michigan University #2 meet.

In a season where sub-4 could be on the table for a lot of the premiere boys milers, Jones is among those in the conversation that could potentially break that barrier. Jones' lifetime best in the mile even came on the indoor oval at New Balance Nationals Indoor where he finished 13th in 4:08.39 -- but watch for him to inch closer to four minutes in 2023.