* Lex and Leo Young will look to qualify for World U20s at the USATF U20 XC Championships on Saturday.

High school distance all-timers Lex and Leo Young have amassed quite the plethora of accolades on their cross country resumes -- California state championships, three national championship team wins and the second- and third-best 5k cross country performances in history, among countless others.

But on Saturday, the Young twins have a chance to add a new bullet point to the long list of achievements: Representing Team USA on the world stage.

Lex and Leo will join a 70-plus junior men's field including over 20 high schoolers at the USATF U20 Cross Country Championships on Saturday morning, toeing the line at Mechanicsville, Va.'s Pole Green Park hoping to book a trip to the elusive World U20 Championships on Feb. 18 in Australia.

It's a meet the Youngs had circled on the calendar before their senior cross country campaigns began months ago back in September 2022.

It's been over a month since we last saw the two on the cross country course, helping the Newbury Park squad to yet another Team Nationals title and it's third national championship since 2019.

But Leo and Lex return possibly looking for redemption on the individual fronts after finishing 11th and 35th individually in Portland.

Nonetheless, Newbury Park's brother duo put together quite the fall showing, with near-5k records at California's Woodward Park, 1-2 sweeps at every regular season meet they contested and consistent front-running for their team under new head coach Tanya Brosnan.

Lex clocked a season's best 14:27.87 for 5k to win the California Division 2 individual title in November, while Leo ran his best 5k at 14:25.90 for first at the ASICS Clovis Invitational in October.

All-in-all, it was largely business-as-usual each time the duo rounded the course this fall.

So why not add a new challenge to the mix in their final cross country seasons before heading off to Stanford later this year?

Cross country is already an arduously long season, and extending the schedule out to January -- and potentially to February -- is no cake walk. But it's a challenge that could actually play in the Young twins' favor, especially considering the purposeful racing calendar they followed in the fall. 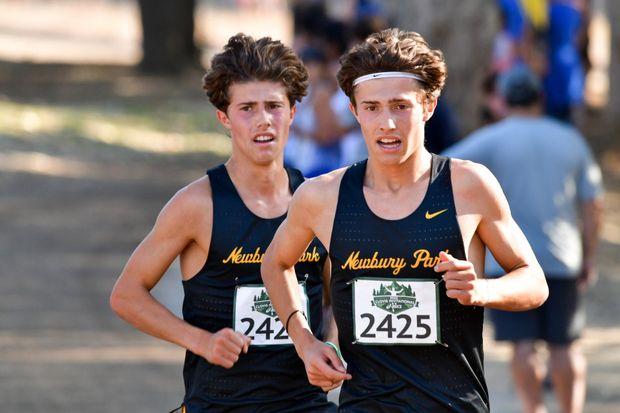 And in a lot of ways, USATF U20 will represent new beginnings for the Young twins.

It's their first cross country race longer than 5k. They've taken to the start line with collegiate racers before, but only on the track.

They've never competed for a spot on Team USA. Never had a chance to race against some of the world's best.

But Lex and Leo Young seemingly are household names, even for those who aren't as aware of their historic accomplishments on the cross country course.

All you have to do is scroll the Internet to understand the larger-than-life figures Lex and Leo have become -- 36.6k subscribers on their YouTube channel, 84k combined followers on their Instagram accounts, not to mention a substantial fan base for their Run Fast Apparel clothing line.

So to say that the USATF U20 championships could add a twist to the final chapter of high school cross country competition for the two is an understatement.

Other high schoolers perhaps took note of Lex and Leo's U20 goals and decided to follow suit with their own seasons.

Champs Sports XC champion Kole Mathison will be there, too. Their own Newbury Park teammate Brayden Seymour will make the trip out to Pole Green Park as well.

That's not to mention the other collegiate racers from Alabama, Michigan and other Division I programs that will go head-to-head with some of the best younger distance athletes.

Six athletes from the junior men's field on Saturday will advance to the World U20 Championships in just a months time, and Lex and Leo are certainly favorites to be among the Team USA representatives.

What could be more fitting than for Lex and Leo end their careers at the largest competition for prep cross country racing?

For two of the best high school distance racers in history, it would be a storybook ending.

Here Are The HS Athletes Entered For USATF U20 XC Champs