VIRGINIA BEACH, Va. -- Just a year ago, Shawnti Jackson lined up in the 300m at the VA Showcase.

A year ago, she claimed the No. 2 all-time performance of 36,95, becoming one of three girls to go under 37 seconds at this distance. Sydney McLaughlin and Francena McCorory were the other high school girls who accomplished this feat.

On Saturday, Jackson looked to up the ante.

She found herself in a loaded field, including the No. 4 all-time performer Madison Whyte of Heritage Newport News (VA), who ran a 37.17 just last weekend.

Whyte, who was posted in lane four, had the advantage of watching Jackson's every move; the North Carolina star was in lane one. Elise Cooper of McDonogh School (MD), the US No. 2 performer in the 200m with a 23.74, competed from lane six.

Once the gun went off, however, Jackson was in a league of her own.

She came off the final bend with a slight lead over Whyte, who added some pressure going into the final straightaway. As Jackson crossed the finish line, the scoreboard showed not only a new personal best but a new national high school record of 36.63, shattering McLaughlin's old mark.

Her performance earned her a second national record. A year ago, she set the 60m mark of 7.18 at the Millrose Games. Whyte improved on her performance from last weekend with a 37.09 and Cooper was third in 37.93. 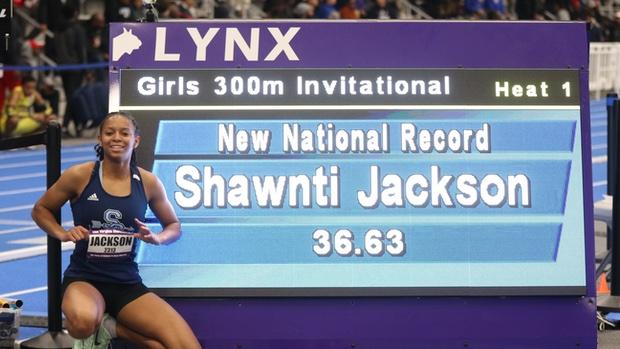