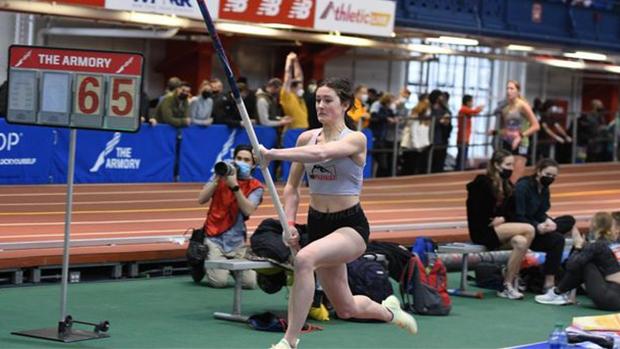 * Hana Moll competes at the Millrose Games in 2022.

The chase for 15 feet begins in Reno, Nevada this weekend at one of most prominent competitions in the U.S. for pole vaulters from the high school level to the pro circuit.

Competition at the 2023 National Pole Vault Summit begins Friday evening, and that list of slated competitors includes none other than the sister duo of American high school record holder Amanda Moll and No. 2 all-time vaulter Hana Moll.

The Moll sisters will travel from Washington and take to the runway in the elite women's division with the likes of Canadian Olympian Anika Newell, NCAA outdoor record holder Olivia Gruver, 2022 NCAA outdoor champion Gabi Leon and a slew of other American professional and collegiate competitors.

It's the first time we'll see Amanda and Hana in competition since the World U20 Championships in August, which saw Hana earn the world U20 crown and Amanda take fifth overall to cap off stellar junior campaigns.

Last indoor season saw Amanda sensationally set the national record at 14-9 at the USATF Indoor Championships in February where she placed fourth in the event.

But it was Hana who stole the show at the 2022 installment of the National Pole Vault Summit with a personal best clearance of 14-8 for second all-time indoors and a junior class record.

* Olivia and Cory spoke with Hana and Amanda Moll after the 2022 National Pole Vault Summit.

The Reno Livestock Event Center could very well be where the Moll sisters begin their chase as the first high schoolers to close in on the 15-foot mark and add even more esteemed performances to their already-historic resumes.

Friday also marks the beginning of the end for the two as they open their senior seasons before heading off to the University of Washington this upcoming fall.

But the exciting competition doesn't end there. On Saturday, athletes across over 40 boys and girls high school divisions will aim for new heights and take part in the action.

That likely includes current US No. 1 girls vaulter Jathiyah Muhammad and national leaders on the boys side, among others.

Simply put, Reno is the place to be this weekend if you're all-in for the pole vault.

It's no surprise then that hundreds of athletes will make the trip to the West hoping for personal bests, wins and potentially some new records.