* Aidan Brancaccio in a cross country race in 2022

Much like the successes of the school's bonafide stars like Mason Gatewood, Matthew Payamps and Brendan Dearie, this first-year group only needed to wait for their turn.

But then the pandemic hit. Competitions halted. Progress slowed the development of all young athletes. Time zapped opportunity.

"Emotionally, this group was getting a little intimidated," said Dearie, who's in his 39th year of coaching at Saint Anthony's. "That's when I knew I had to straddle the fence and push them without overdoing it."

But as competition returned fully in New York last year, a switch flipped. Dearie saw an immense dedication over the ensuing summer.

"They're the first team I've had where the top 10 did absolutely everything they had to do over the summer," he said.

Perhaps this group's time was coming in 2022.

It's Feds Or Bust For Aidan Brancaccio And Saint Anthony's

Two meets into the season, the Friars are a perfect 2-for-2, with wins from the PTXC13 Invitational and the Regis Invitational.

On Friday in Cartersville, Georgia, Saint Anthony's could put down an even bigger statement with a win at the Wingfoot XC Classic. And for a team that has high hopes -- not just in New York but beyond -- an out-of-state win could signify the overall potential of the Friars.

"They know that this kind of weekend will be a different weekend," Dearie said. "They will have to be all-in. We're not looking at this like some kind of championship. But I want the absolute best out of them for September 23. That's what we're looking for."

So far, Saint Anthony has an exciting mix of veterans. Seniors Aidan Brancaccio, Hunter Wilson and Sean Dearie are among the lineup's top five. Juniors Jack Morelli and Collin McLaughlin, along with John Melloy and sophomore Regan MacPherson, round out the top seven.

Brancaccio has been the team's No. 1, finishing second in each of his two races. Tim actually coached Aidan's mother in the early 90s, he said. Sean Dearie, meanwhile, is the youngest son of Tim. Both seniors have taken on leadership as co-captains.

While the ladder can often be seen as the megaphone, often declaring what the workout might be or be a source of positivity, Dearie often takes on the more tactile aspects, preferring to let his actions do the talking.

Part of that responsibility may be embedded in him, Tim says, considering Brendan was his highly-successful brother.

"He puts a lot of pressure on himself because his brothers were on state record relays and won at the Penn Relays and were All-Americans," Tim said. "But he's a coach's son. He's good that way with the team. He knows what to do. He gives them confidence in pressure situations and he's so sure about what to do and when to do it and how much to do." 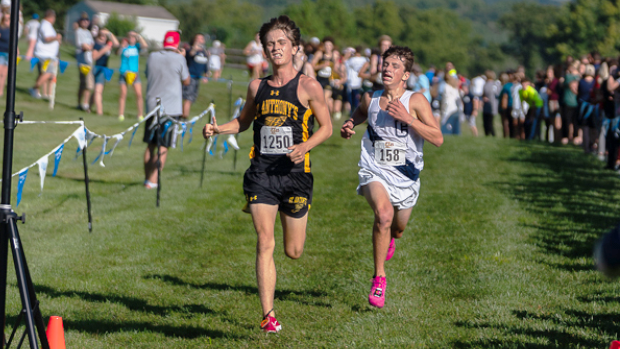 Tim says he likes to use Speed Ratings as a way to make meaningful evaluations across meets compared against other teams. Right now, Saint Anthony's may be one of the more balanced teams in New York. They may possibly even be on the cusp of the national rankings.

"They know that this kind of weekend will be a different weekend. They will have to be all-in. We're not looking at this like some kind of championship. But I want the absolute best out of them for September 23. That's what we're looking for."

Dearie knows he's got something here.

"As much as I thought they were good, I just needed to see it," Dearie said of his team's win at PTXC13. "I was just relieved. I was happy but relieved, because it confirmed what I thought."

In order to compete for championships, though, the entire team might have to elevate their level just a few notches.

That's why a meet like Wingfoot XC is on the calendar, Dearie said.

In October, the team will also travel to the Manhattan Invitational to compete in the Eastern States race. A month later, the Friars will go all-in at the New York Federation Championships -- Brancaccio says the meet is one of the team's primary objectives -- and then will follow with the Team New York Region, with the hopes of qualifying for nationals.

"I want them to run as a group, like they're good at doing," Dearie said. "But at a little higher level."

First up is the Wingfoot XC Classic.

The chance to make statements is now.