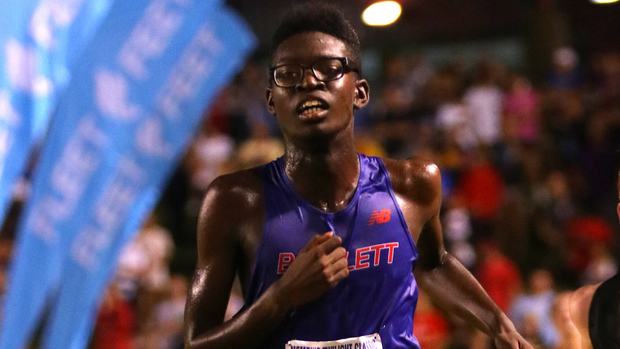 Just a few days earlier, at the Gulf Coast Stampede Invitational in Pensacola, Florida, the high school junior from Tennessee had to be taken to Ascension Sacred Heart Hospital after suffering a heart attack in the moments following the race.

Higginbottom, who had fallen at the conclusion of the varsity boys 5K where he finished 109th, initially complained of chest pains, Moore said.

For those wishing to donate to Gabriel Higginbottom's recovery, please consider giving to the family's GoFundMe. You can visit the link here.

But while Higginbottom was able to get to his feet and make his way to the ambulance, what he later found via an Electrocardiogram -- along with those who trekked with him to the hospital -- was that "something wasn't right," Moore said. "That's how the ball got rolling."

In the ensuing interim, after being airlifted to the University of Florida's Shands Heart and Vascular Hospital in Gainesville, it was discovered that Higginbottom had suffered a heart attack. Tests showed significant blockage in his arteries, Moore said.

What then proceeded was an angioplasty surgery that opened up Higginbottom's artery, though another surgery was later done to insert two stints after more blood clots were found, Moore added.

The quick thinking at the finish line may have just saved the teenager's life.

From there, others took action. Moore, who is the father of Bartlett junior Andrew Moore, pressed ahead with a fundraiser to support growing costs. Knowing that the unexpected trauma would create indeterminate financial stress, he started a GoFundMe.

Perhaps it was here when quick-thinking turned into a revelatory moment. 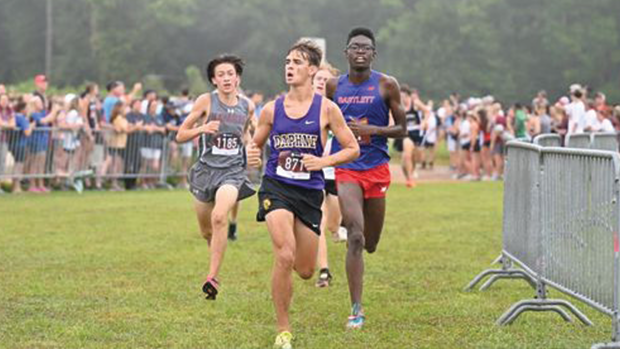 * Higginbottom (far right) at the Gulf Coast Stampede, just moments from the finish

Within hours of the GoFundMe's initial moments on the web, it had already raised thousands of dollars.

Moore said all the money will go directly to the Higginbottom family to help pay for the unexpected costs of surgery and expenses related to his hospital stay.

"I reached out to Gabriel's mom and she gave me permission to do it," Moore said. "The GoFundMe is 100 percent in place to off-set any medical costs they have."

At the same time, the Bartlett XC community has come out in full force.

"There is this overarching care and family that I see in cross country," Moore said.

"And from what I understand, this is something rare that he's dealing with. Most 16-year-olds who are in the shape he's in aren't going through this."

In the meantime, Moore said, Higginbottom is set to be released from the hospital within the coming days.

The Bartlett XC program is headed to its next meet this weekend at the Southern Showcase in Huntsville, Alabama.

Planned for the meet, Moore said, will be a new addition to the Bartlett XC attire. The booster club is currently working on screen-printing t-shirts that read "Running For Gabe" and "Running With Our Hearts To Support Yours."