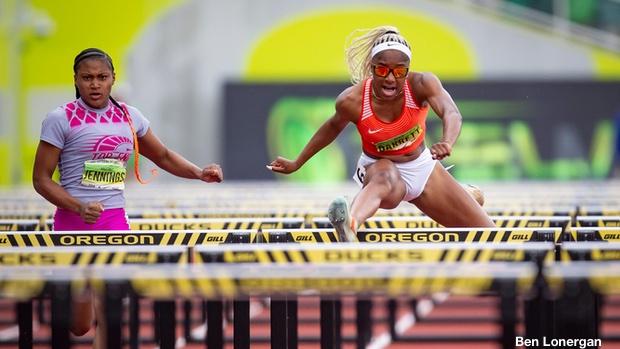 * Akala Garrett competed in the 100mH at Hayward Field

Garrett finished the outdoor season with the world's fastest U18 and U20 400mH time en route to her title in Colombia during the World U20 Championships.

A seven-time North Carolina champion, she was the nation's top hurdler in 2022, finishing the year at U.S. No. 1 in the 100mH, 300mH and 400mH. She committed to the University of Texas in the spring.

Garrett's 24 points at the state meet led Harding to a ninth-team place finish in the Class 4A classification.

On The Line: These Big XC Transfers Can Make An Impact

On The Line: Akala Garrett Has Her Sights Set On World U20s

In Colombia, Garrett set a lifetime 400mH best time of 57.28 seconds, which was a U.S. No. 1 and a North Carolina No. 2 all-time performance. The rising senior brought home another medal as she ran a leg on the gold-winning 4x400m which clocked a 3:28.06.

Albemarle finished 10th at the NCHSAA 1A State Championships this spring.